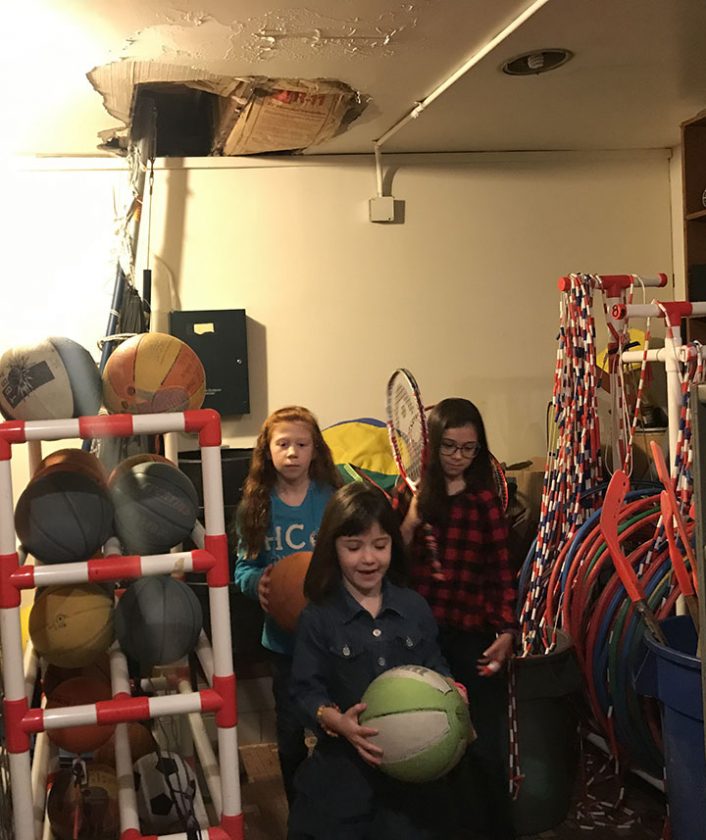 News Photo by Julie Goldberg Wilson Elementary Schools students get gym equipment out to play with on Feb. 6 while a hole in the ceiling is seen above them.

ALPENA — Trash cans are collecting water in hallways and classrooms and ceiling tiles are leaking water onto desks around Alpena Public Schools.

Those are causing distractions and problems for students and teachers.

Students and teachers both say the problems within the schools are forcing them to move desks in classrooms, close rooms, and walk around buckets in hallways that are collecting water.

District maintenance personnel have worked nonstop throughout the past few months because roofs are leaking and boilers are not working properly.

Alpena High School senior Nikita Cordes said the public should know how much the state of the buildings is affecting her and other students. 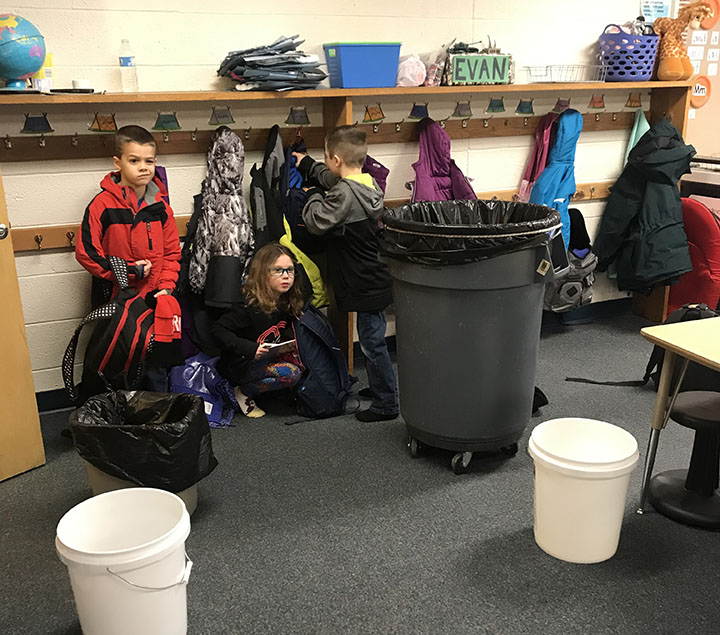 News Photo by Julie Goldberg Wilson Elementary School students put away their coats and boots on Feb. 6 while maneuvering around buckets set out to collect water dripping from the ceiling.

“In our (senior) lounge, we have water dripping, we have to have a bin in the middle of our area,” Cordes said. “We have some in the hallways, too, and even, like, different parts of the classrooms. A lot of people don’t realize how bad it’s starting to get. It’s affecting us and how we’re learning.”

The district is asking voters on March 10 for permission to sell $33.9 million in bonds that would be used for facilities repairs and renovations throughout the district, including new roofs for every building and new boilers for a majority of the buildings.

The bonds would be repaid through property taxes. The district expects taxes to stay the same — 1.8 mills, or about $90 a year for the owner of a $100,000 house — because bonds sold in the 1990s are about to be paid off. If the March 10 proposal is rejected, taxes are expected to decrease next year.

This is the district’s second attempt at a bond proposal in less than a year. In May, voters overwhelmingly rejected a $63 million bond proposal that was expected to increase taxes.

Before that vote, several residents complained about the tax increase and questioned the need for some of the projects planned for the money. Projects planned through the March 10 proposal are far more narrow in scope.

With older roofs, teachers and students are dealing with leaky ceilings or the chance that ceiling tiles collapse.

Boilers are not working properly this school year and the district is trying everything it can to salvage them — including finding parts on eBay, since the boilers are so old that parts from boiler companies are nearly impossible to find.

Older, malfunctioning boilers have resulted in students and staff members either wearing coats in the classroom if it’s cold or figuring out ways to dress comfortably if the classroom is hot.

“Students know that they should have a sweatshirt or sweater and something short-sleeved underneath,” Gapske said. “That way, they can be comfortable when they are learning.”

Alpena High students say the classrooms in the upstairs portions of the school can get extremely hot — so hot that teachers have had to move their classes to the commons area or library so everyone is comfortable.

“We had to do that for almost two weeks, and there was probably three or four classes in the commons at that time, also,” Cordes, the Alpena High senior, said.

Senior Haley McCartney said that, in the warmer parts of the year, it’s hard to dress comfortably because some classrooms are hotter than others.

The elementary schools are older, with a majority built in the 1950s and the the newest being Lincoln Elementary School, which was built in the late 1990s, thanks to a 1996 bond sale approved by voters.

Ella White Elementary School — which was built in the 1950s, with additions completed in the late 1950s, early 1960s, and 1990s — was the district’s most populous elementary school last year, with 460 students. The building is old and falling apart, Alpena High students who have spent time in that building said.

“The way that that school functions is just not, like, very viable for what students need now,” sophomore Cole Barsen said of Ella White, where his mother is a teacher. “There are no security cameras installed (and) everything’s asbestos-ridden and there’s really no way to get rid of it, since the district hasn’t had enough money to abate it.”

The March 10 bond proposal would replace the roof at Ella White and remove asbestos, replace the heating system, install security cameras, and fund other projects, according to a brochure the district has given to community members.

“You can tell that Ella White is really starting to get worn down, because they do the craft show in the winter and you walk through and into the gym, you’ll see the gym all of a sudden start slanting in the one corner,” Cordes, the Alpena High senior, said. “You’re just wondering that younger kids are here playing on this every day.”

Besser Elementary School fourth-grader Will Meinhardt said there are buckets in the hallways at the school, which was built in 1958 and has roofs and boilers that are both over 20 years old.

“It’s kind of annoying that we have to walk around them all the time,” Meinhardt said of the buckets.

THE DISTRACTIONS THE ISSUES ARE CAUSING

When ceilings leak, teachers have to rearrange their classroom so students’ desks or books don’t get wet. Gapske, the Wilson Elementary teacher, said that, when that happens, it can throw students off because they’re used to a routine at school.

“I teach kindergarten and first-grade kids. They thrive on routine and consistency,” Gapske said. “When their classroom is rearranged often and buckets and garbage cans are catching water, it causes them to have to find new learning spots. It is definitely a huge distraction.”

If students can’t focus on what she or other teachers are doing, it’s hard for them to be successful in the classroom, Wilson Elementary fourth- and fifth-grade teacher Lori Walling said.

“It is distracting for us, it’s distracting for the kids, and my question always is, ‘What’s coming through the ceiling? Is it something we should be worried about more for health reasons for children?'” Walling said. “We’re always looking out for the best interests of kids.”

WHAT THE COMMUNITY SHOULD KNOW

The current state of the buildings can have an impact on the future of Alpena Public Schools if they’re not fixed, Alpena students and teachers say.

McCartney, the Alpena High senior, said $33.9 million is a substantial amount of money, but no one will want to bring their kids to Alpena if there’s not a solid foundation for education.

“The kids that go here now, if nothing changes, they’re not going to want to bring their future children back into this school,” Caisee Stanton, a high school junior, said.

Unsafe and non-functional buildings can also impact who wants to come to Alpena to work as either a teacher or staff member.

“It’s going to be hard to recruit new teachers,” Meinhardt, the Besser Elementary fourth-grader, said. “There’s going to be people moving from Alpena because they’re not going to want to live here.”

Security is also important to students. Barsen, the Alpena High sophomore, said it’s important for the schools to have updated entrances because of school shootings. In 2019, there were 25 shooting incidents with injuries or deaths in the U.S., with eight people killed, according to Education Week. No shootings occurred in Michigan.

The bond money would add a security entrance to each school building, which means people would have to enter a school’s main office before being allowed into the rest of the building.

Right now, people enter a school’s lobby and can avoid going to the main office when entering the schools. All schools besides Alpena High have a buzzer system in place.

“We do have Officer Tim (Marquardt), which I’m sure we’re all grateful for, he’s here and he does help a ton, and I’ll give him that, but he’s him alone and security cameras,” Barsen.

Check out Monday’s edition of The News for a look at how families feel about Alpena Public Schools’ facilities.

News Photo by Julie Goldberg Wilson Elementary Schools students get gym equipment out to play with on Feb. 6 while a hole in the ceiling is seen above them.

News Photo by Julie Goldberg Wilson Elementary School students put away their coats and boots on Feb. 6 while maneuvering around buckets set out to collect water dripping from the ceiling.