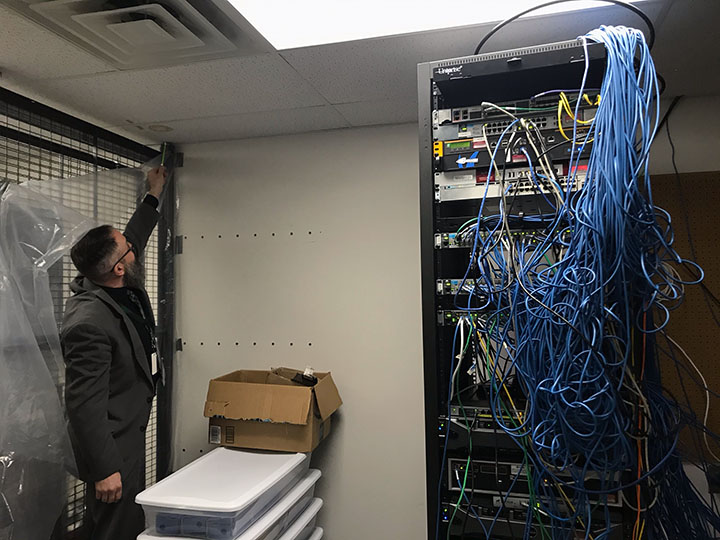 News Photo by Julie Goldberg Scott Reynolds, superintendent of the Alpena-Montmorency-Alcona Educational Service District, shows water damage near the district’s computer network servers on Thursday. The roof above that section of the building will be changed to a sloped, vented roof system to keep heat from traveling into the attic and improve ventilation.

The Board of Education on Thursday accepted a $63,500 bid from Meridian Contracting Services for ceiling and insulation repairs.

“Meridian has proven themselves to be very responsive to work with us,” ESD Superintendent Scott Reynolds said.

A section of tiles collapsed in October, which was caused by the ceiling tile grid not being secured with insulation laying on top of it. After that, officials noticed that other ceiling tiles around the building were not secure, along with a lack of insulation in some areas.

The $63,500 will be used to properly secure ceiling tiles, along with securing lighting and adding proper insulation above the ceiling tiles.

The board also approved a $25,000 contract with OHM Architects. The contract allows OHM to develop a design proposal for future work at the administration building.

It’s the third time the board has approved a contract from OHM. The first contract was for heating upgrades at Pied Piper School and the second contract was for roofing, ceiling tiles, and windows at the school.

The third contract, which was approved Thursday, involves work at the administration building.

The projected work includes replacing the roof and soffit vents, replacing wood siding while checking for potential mold and mildew and seeing if additional insulation is needed, renovation of the flat roof and changing it to a pitched roof, and the renovation of interior storage space to house new mechanical units.

Reynolds said changing the flat roof to a pitched roof will prevent heat from traveling into the attic and improve ventilation.

“The plan would be to move the mechanical units into the building and near where the electrical panels are and taking up one of the storage areas,” Reynolds said. “By moving the mechanicals on the ground, it allows for easier maintenance.”

The Alpena-Montmorency-Alcona Educational Service District Board of Education on Thursday also:

∫ voted to extend Superintendent Scott Reynolds’ evaluation to the end of April. The change was made because a few board members will be absent at its next meeting on March 12.