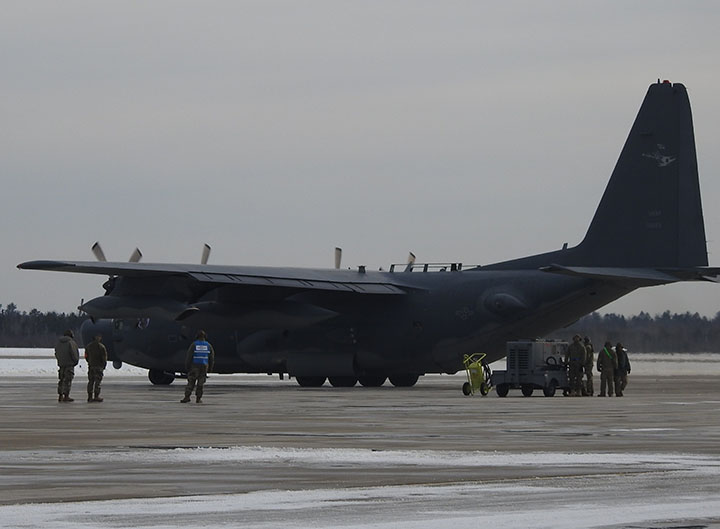 News Photo by Julie Riddle Ground crew wrap up their work as a military gunship prepares to depart from a runway at the Alpena Combat Readiness Training Center on Wednesday.

ALPENA — Giant propellers buzzed in the cold air, perched on the shoulders of the gray behemoth that lurked at one end of the runway.

Small-caliber machine guns and devastating cannons protruded from the beast’s belly, ready to fire with deadly precision in the dark of the night.

“It carries a pretty big punch” said Lt. Col. Dustin Budd, one of the people responsible for training exercises bringing hundreds of military members to the Alpena area this month to practice life-saving techniques and build relationships in the middle of the snows of Northeast Michigan.

At the Alpena Combat Readiness Training Center on Wednesday, the oversized AC-130 gunship — an armed, ground-attack aircraft — paused heavily at the end of one of the runways shared by CRTC and the Alpena County Regional Airport.

Propellers whirring on its outstretched arms, the aircraft bullied forward with its blunt front nose, charging down the runway until suddenly it was among the clouds, disappearing quickly, guns still at the ready.

Winter Strike, military training that takes advantage of the snows and cold of a Michigan winter, is a new component of the longstanding Northern Strike exercises that visit the CRTC and the Camp Grayling Joint Maneuver Training Center each summer.

The training is being held at the CRTC until the end of January.

In the air Wednesday afternoon, the AC-130, making a quick flight to the Grayling airspace, was preparing to engage in close air support drills.

Troops on the ground, Budd explained, may run into hostile forces they can’t overpower on their own. An armed airplane can come to the rescue, its bullets attacking the enemy in dangerously close proximity to its own soldiers.

“It’s an orchestrated dance,” said Budd, a former military flight instructor who has experienced close air support situations firshand. “You don’t want to figure out how to do this when you’re taking fire.”

Targets and teams on the ground at the Grayling training space allow those on the ground and in the air to practice vital communications to make sure ammunition lands where it’s wanted.

Most of the week’s drills are run at night, Budd said, simulating the under-cover-of-darkness missions most likely to be experienced in an actual combat situation.

The Winter Strike exercises, for which northern Michigan was a natural fit, were developed to intentionally provide cold-weather scenarios.

In summer, or in the hot climate of the Middle East, de-icing a plane isn’t a consideration.

The U.S. military needs to prepare for all potential military situations, Budd said, prompting the desire to mimic conditions that might be found in Russia or China.

On the CRTC airstrip, after the big plane’s departure, men and women in military fatigues stowed gear, loaded carts, and headed away from the runway, their work done.

In addition to the teams in the air and on the ground at Grayling’s training space, the recent trainings provide hands-on practice for the staggering number of support personnel required to run a military mission, most of their work unknown and unseen, Torres said.

Trainings at the CRTC also build connections between the several military branches represented, some 500 to 700 personnel advancing into northern Michigan through the end of the month from across the U.S. and several other countries.

Kaspars Visnekovs, a Latvian commander of airfield operations, is in Alpena again, having visited the area a number of times for various trainings at the CRTC.

Michigan and the Latvian military have a long-standing connection, having partnered after the dissolution of the Soviet Union. Latvia and Michigan are natural partners, Visnekovs said, sharing similar climates and natural beauty.

Military interactions between the country and the state are frequent, visits and joint trainings offering a chance for both sides to share vital information about everything from firefighting to medical response to public relations strategies.

Learning from each other, practicing together, sharing experiences, helps those with a common goal to move forward, Visnekovs said in his thick Latvian accent.

It helps them “to talk one language,” he said.