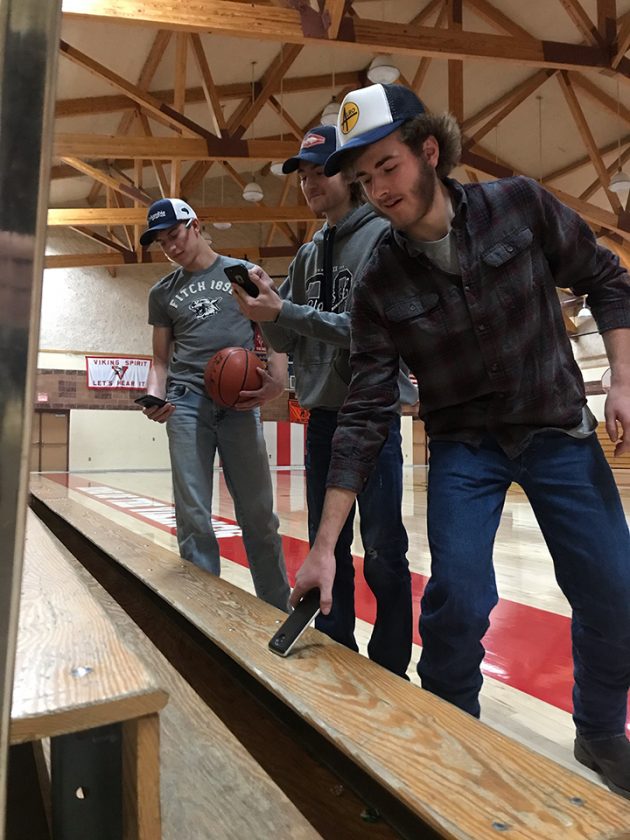 News Photo by Julie Goldberg From left to right, Posen High School seniors Wyatt Romel, George Kroll, and Cameron Paull put their phones down so they can play basketball during a lunch period on Jan. 8. The students say they are rarely on their phones and enjoy face-to-face conversations more, especially during lunch time.

ALPENA — Cell phones have impacted how students interact with one another.

Local school administrators and students all say eye contact is not as common anymore because of how technology — primarily smartphones — has affected students.

Social media has also changed students. Students see others constantly on social media throughout the day as they update their status, post pictures, or just share random updates.

While smartphones help people stay better connected than ever before and put a world of information in everyone’s pocket, something is lost in the real world, kids and educators said.

Posen High School senior George Kroll has seen cell phones affect other teenagers at school socially. He sees younger students constantly on their phones so they’re not making a lot of eye contact or having that social time with one another.

“You see kids just lose focus and entertain themselves, whether it be gaming, social media, texting, et cetera,” Kroll said. “It definitely affects us, socially.”

“When people are talking to you, you’re interacting with them and talking with them and the phone is down,” Wesner said. “That shows that you care about them. So, having those types of conversations with the kids ahead of time will help.”

THE IMPACT ON TEENAGERS

The report also states that 45% of teenagers say they are online on a constant basis — which has doubled since 2015.

School administrators know cell phones are a part of children’s lives, so they’re trying to figure out how to combat the constant use of them.

Rogers City Area Schools Superintendent Nick Hein said students need to be social in the real world, because it forces them to come out of their bubble. Phones work against people being social, he said.

“Now, you can always hide in that phone,” Hein said. “You don’t even have to come out of that bubble anymore. You can just stay hidden in it, and that’s not good. Having to socialize, having to understand that people dislike things you like, or like things you like, instead of being just part of the bubble, which that phone puts you in, is so important. It’s so important to grow up and be somebody who is going to have to go out and work in the world.”

Parents paying attention to what their children are doing could decrease students’ use of cell phones, school leaders say.

Wesner said parents should have conversations with their children about technology and about proper etiquette with phones.

Hein said cell phones can become the ultimate crutch, because it can easily provide someone instant gratification with little to no effort.

The danger with that, Hein said, is that kids could learn to expect that in every aspect of their lives.

“Unfortunately, that doesn’t bear any resemblance to the real world,” he said.

A positive, though, is that people always have a personal piece of technology on them, Kroll, the Posen student, said. So, if they ever have a question or need to look something up, their phone is right there.

“The negative is that it’s a big distraction,” Kroll said.

IS IT AN ADDICTION?

Cell phone addiction can happen to anyone — both teenagers and adults — because it’s hard for them to let go of their phone if they rely on it, researchers say.

A study completed by King University in 2017 showed 50% of teenagers who completed a poll on Common Sense Media “feel addicted” to their cell phones.

Those teenagers might have “nomophobia” — the fear of being without your phone for a long period of time.

Some signs and symptoms of cell phone addiction are reaching for a phone first thing in the morning, using it when you’re bored, and becoming anxious or agitated when the phone is not in sight.

“You’ll be talking and then, all of a sudden, two people drop out of the conversation because they need” their phone, Posen senior Cameron Paull said. “It’s like a withdrawal symptom sort of thing.”

Posen senior Wyatt Romel said he’s worried for the younger generation. His little sister is 4 years old and already knows how to use a phone, he said.

THE IMPACT OF SOCIAL MEDIA

The rise of social media has increased the use of cell phones.

If people are bored, they can end up on social media for hours and lose track of time.

Romel, the Posen senior, said he’s one of those people who will look at Instagram or Snapchat for hours if he has nothing else to do.

“Even in school, you look around and kids are always Snapchatting each other, and that’s the new norm,” Romel said. “You don’t call people anymore. You Snapchat them or (direct message) them on Instagram. There’s no more talking on the phone.”

Kroll said that, though he doesn’t know why, he feels obligated at night to look at Instagram for 10 minutes.

Hein said every action on social media can have a consequence, and it’s hard for young people to understand that.

“The world of social media — the Instagram, the Snapchat, those type of things — it’s not a safe world, and it’s not a positive world,” Hein said. “It’s a world built a lot of times on fake images on what people think they are.”

Wesner — the Posen superintendent — said it’s important parents are aware of the different apps, websites, and other things teenagers could use on their phone.

“We can make sure that we’re talking to them about those things,” she said.

Hein said parents should have the passwords for their child’s phone and any account they have so they can see what’s going on.

Check out Monday’s edition of The News for a closer look at one student and her relationship with her phone.