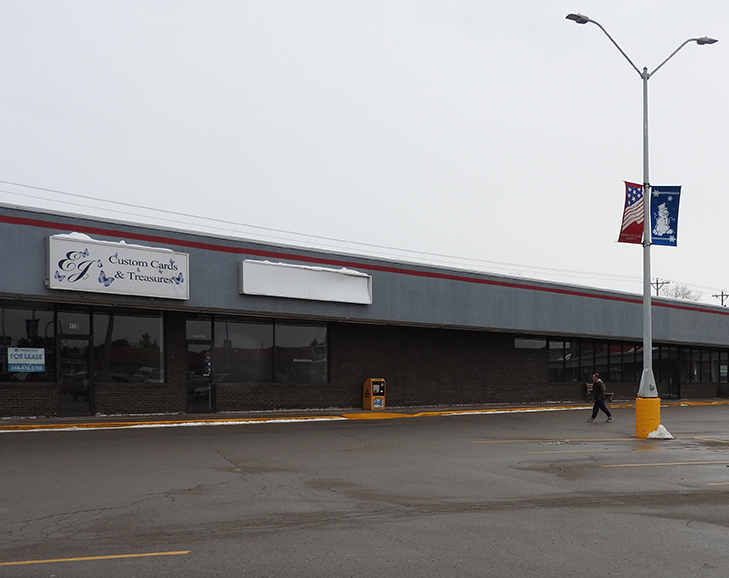 News Photo by Crystal Nelson A shopper walks past an empty storefront at the Thunder Bay Shopping Center on U.S.-23 on Friday. New improvements are being made to the shopping center’s parking lot to help make it more attractive to prospective tenants for some of the center’s vacant storefronts.

ALPENA — While the national unemployment rate remains steady at 3.5% and consumer confidence continues to increase, businesses continue to turn over and buildings around town remain vacant.

He said it’s not something the Chamber tracks.

Mahler collaborates with city officials and representatives from the Alpena Downtown Development Authority and the Michigan Economic Development Corp. to connect potential developers with potential projects. He said an event is in the works at which prospective developers could tour some of the vacant properties in the city. Those efforts, along with efforts by property owners, aim to fill some of the empty storefronts and acreage around town.

When it comes to economic development, Mahler said, he likes to think of Alpena’s overall gross domestic product. 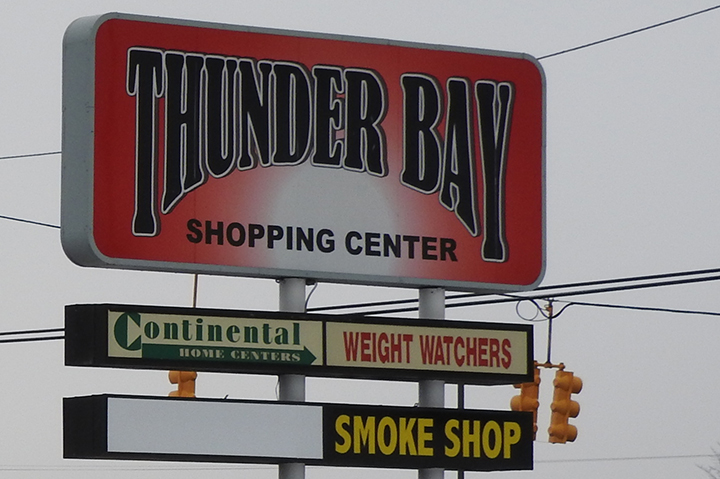 Every time a new business chooses to build in the community, such as Meijer on M-32 or the Holiday Inn Express and Suites downtown, he thinks about who the business draws to the community and how much those people will spend while they’re here.

Mahler said the area has certainly been enhanced because of those investments.

“Having empty spaces doesn’t do anything to enhance our GDP,” he said. “Putting businesses in them — particularly businesses that are more unique or attract customers from outside of our area — that adds to the overall economy of this whole region.”

Mahler noted that, over the course of the last decade, many businesses in downtown Alpena have converted their second stories into apartments while keeping the first floor as retail space or a restaurant.

He said a long-term goal of the DDA is to have more people living downtown to support local businesses.

There has been a lot of interest in the former Alpena Power Co. site, located at the corner of 2nd Avenue and Water Street, which developers have considered for a mix of retail space and condos, Mahler said.

But developers have been “skittish” about purchasing the property when it could be a hard sell to potential tenants, he said.

While a potential sale of the Alpena Power site had been announced in September, Mahler told the Alpena Municipal Council this week the deal had fallen through after the would-be developer’s research showed he couldn’t charge enough rent to make a good return on investment.

“The challenge that I think we’ve discovered here in this particular market is the cost to build something like that — whether it’s here, Traverse City, Petoskey or Detroit — it’s all pretty much the same,” Mahler said. “It’s going to cost you $250 per square foot to build it, and the problem in our zip code here is the sales prices don’t support or recover that level of cost to build.”

However, Mahler is optimistic the project will become more viable over time.

In other parts of the city and Alpena Township, portions of shopping centers or properties that once held national chain stores also remain empty.

Mahler said that, often, properties with empty buildings — with weeds in the parking lot and dirty windows — can look unsightly to visitors.

“Obviously, when there’s a parking lot that’s full of cars, that subliminally tells people there must be something good going on there, because look at all the activity in the parking lot,” he said.

At the Thunder Bay Shopping Center, anchored by Neiman’s Family Market, the property’s management team is hoping improvements will attract more tenants. There are currently six spaces in the plaza available to lease, ranging from 1,200 square feet to 8,000 square feet.

The shopping center was sold to the Fort Worth, Texas-based Woodcrest Capital in 2018, and those new owners recently hired Thomas Duke Commercial Real Estate to manage the property.

“We’ve already done some changes — we’ve got new parking lot lights, we did a lot of parking lot repairs, we got new striping,” Property Manager Trevor Duke said. “A lot of those things are bringing the property up to the quality we think is desirable for new leasing, as well as reducing cost.”

John Porth, leasing agent with Thomas Duke, said retail has transitioned over the years and there are fewer tenants selling goods. The more popular uses nowadays include food-related businesses and services, such as salons or gyms.

Once the planned repairs to the shopping center are made, Porth said, the firm will begin to aggressively pursue tenants who might offer those more popular options.

“This landlord is not trying to get every nickel,” Porth said. “He’s told us, ‘Look, I want to get this thing filled,’ and that’s what we’ve been charged with, and that’s the plan. We’re listening to any and everybody who comes to the table, and they’ll try as hard as they can to make a match.”

‘CREATED A SPOTLIGHT ON … WHERE WE’VE FAILED’

Mahler, of the Chamber, said one of the biggest redevelopment successes in the past year has been the sale of the former Kmart property on U.S.-23, which sat vacant for nearly two-and-a-half years.

He said former Chamber economic development director Jim Klarich was able to work with the real estate investment fund that previously owned the property to get it sold. It was bought by a consulting firm called I2P, short for Moving Ideas to Production, which plans to open a facility capable of housing multiple small manufacturers.

To make that happen, Mahler said, Klarich also worked with Alpena Township officials to get the property rezoned.

There are residential dwellings in the township’s U.S.-23 North corridor, for example, where there should be businesses, Skibbe said. Officials also are reviewing U.S.-23 South, heading out of Alpena, and the M-32 West corridor.

“The exercise has been to do a constructive overlay,” he said. “It’s a newer technique in zoning, and it’s being utilized throughout the nation, so I’ve really been pushing an overlay mentality to the planning commission.”

Skibbe said it was during the rezoning of the former Kmart property that township officials discovered the business fit into more of a manufacturing zoning than a traditional industrial zoning, but the township didn’t have zoning for manufacturing.

The property was rezoned to light industrial from community business, so it could operate as a manufacturing and product design business.

“That whole process created a spotlight on historically where we’ve failed positive economic development, because, if those were your only options — going from a (business zoning) to industrial — there’s a lot of area in between, and that’s where manufacturing really fills that gap,” he said.

The manufacturing zoning will be included in the township’s constructive overlay.

News Photo by Crystal Nelson A shopper walks past an empty storefront at the Thunder Bay Shopping Center on U.S.-23 on Friday. New improvements are being made to the shopping center’s parking lot to help make it more attractive to prospective tenants for some of the center’s vacant storefronts.