Not worried about lead rules 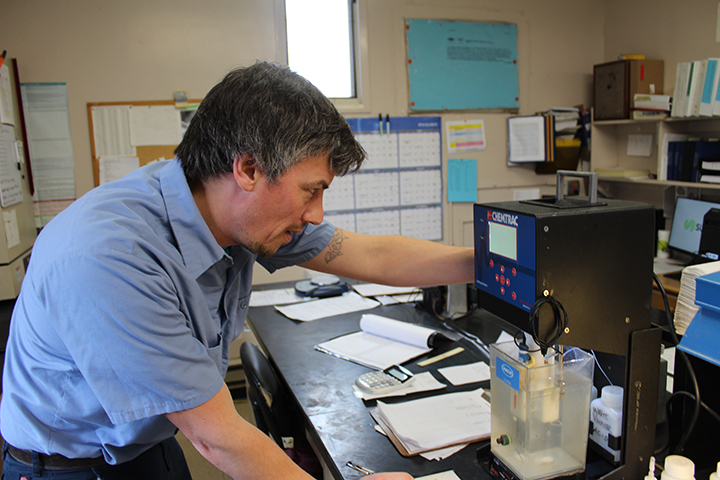 News Photo by Steve Schulwitz Surez employee Ben Lankheet does some simple water tests that were drawn from Lake Huron. Alpena and other communities also test for lead and will need to comply with more stern limitations beginning in 2024. The current standard for lead in drinking water is 15 parts per billion and it will be lowered to 12 ppb.

ALPENA –After the Flint water crisis, the state knew changes were needed to prevent a repeat of the catastrophe.

In response to the lead poisoning in that city’s water, the state mandated steps to remove lead from municipal water systems and adjusted the testing criteria for lead.

Currently, the state’s maximum level of lead allowed in drinking water is 15 parts per billion, but that standard will be lowered to 12 ppb beginning in 2025. The changed standards also increase the frequency of testing that must take place for cities, townships, and counties in the state.

Northeast Michigan officials said they have no concerns about meeting the tougher new standards.

In Hillman, the most recent test results in September showed three homes in the 20-ppb range, but follow-up tests showed much lower levels.

Hillman Department of Public Works Superintendent John Burr said none of the service lines connecting water mains to homes or businesses are lead, but it’s possible faucets or other fixtures in homes contain the metal.

“In the state’s eyes, we are responsible for what people put in their mouth,” Burr said. “They could have purchased something from overseas, where the standards aren’t as high, and it makes a difference.”

Hillman, where officials test for lead every three years, distributes water from wells that have met all of the state requirements when tested. Officials also treat the water with phosphate to reduce the risk of corrosion and leaching. Officials test water from the kitchen faucets in 10 homes and have asked for an additional 10 to be added to the list, but Burr is confident the village can meet state standards.

For years in Alpena, which provides water to the city and Alpena Township, lead testing was required every two years, according to officials from Suez, the city’s water and sewer contractor. But, after years of good results, the state lowered the testing requirements to every five years.

Suez Utility Manager Mike Glowinski said test results have never been a concern at the five sites where lead service lines were used and testing occurs.

“To my knowledge, we have never exceeded that 12-ppb limitation,” Glowinski said.

City Engineer Rich Sullenger said the city and township’s drinking water is extracted from Thunder Bay and treated to meet the state guidelines. He said the city has for years used corrosion inhibitors that consist of a phosphate that protects the pipes from leaching, even if they are made of lead. That makes the water treatment process more costly, he said, but it is worth it to ensure a Flint-style crisis doesn’t happen locally.

“We have that coating on the wall of the service lines, so the lead doesn’t leach out into the drinking water,” Sullenger said. “The city has always taken this matter seriously, even before these new rules and regulations came down. We had a lead and copper monitoring program for many years. We are complying with the new parameters and testing requirements.”

Like Hillman, Rogers City provides water to customers from wells and lead tests are conducted every three years, with the most recent last summer. Water Supervisor Chuck Kieliszewski said the results were compliant.

“We ended up well below the average,” he said.