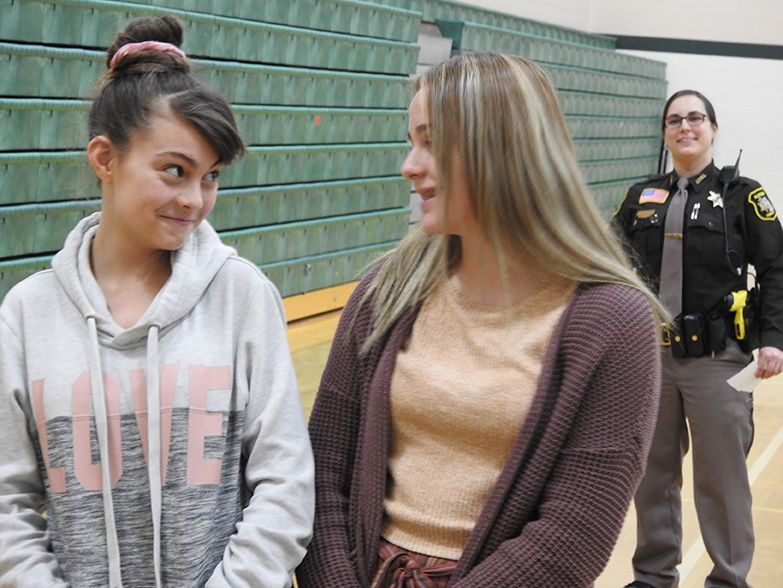 “They want to be themselves, but they don’t know how to do it,” said Emily Modrzejewski, a polite, cheerful eighth-grader at Thunder Bay Junior High School in Alpena, talking Thursday about girls who populate the classrooms and hallways of middle school.

Gossip, peer pressure, cyberbullying, students laughing and posting video while a fellow student is mocked, boys being cruel — too many hurts and not enough confidence to hold up under it all.

To combat those challenges, a group of local girls will be invited to the Michigan State Police Training Academy in Lansing in June for the Michigan Youth Leadership Academy, a five-day training designed to help young people become the leaders they want to be.

The junior high experience is not like it used to be, Simon said. Today’s young people, and especially girls, fight battles waged not only in school hallways but in their pockets, in their bedrooms, and anywhere within technology’s reach.

“People say mean things, like, ‘You’re ugly,’ or, ‘You should be dead by now,'” said Modrzejewski, who, like the other girls at school, faces daily decisions about how to react, when to speak up, and how to be herself when the world she sees is telling her to dress, sound, and act like someone she’s not.

It’s a battle young girls shouldn’t have to fight alone, organizers of the youth academy say.

The academy, free to all participants, hosts young people aged 14 to 15 from a specific region of the state in each of its sessions, some for boys and some geared toward girls. For the upcoming session, June 14 to 18, 20 girls from Alpena, Alcona, Montmorency, Oscoda, and Presque Isle counties will take a charter bus to Lansing, where they will learn communication techniques, interview skills, and public speaking tactics.

They’ll have eye-opening glimpses into the dangers of gangs, domestic and dating violence, and alcohol and drug use, preparing them for the very real perils of the world in which they are growing up.

Cruelty can be common among middle schoolers, said Alpena County Deputy Christina Bednarski, school resource officer at the junior high. Many times, even girls who want to help another, hurting student will stay silent, afraid of becoming the next target.

Social media has compounded the difficulty of being young, Bednarski said.

Nobody should have to have an identity crisis when they’re 13 years old, Bednarski said. She, Officer Linessa Mellberg, of the Alpena Police Department, and Simpson will accompany the girls to the academy, leading the girls in sessions and building positive connections to law enforcement.

The officers are looking for girls who are potential leaders, Bednarski said, including those who sit quietly, wishing they had the confidence to step forward and speak out for what’s right.

Adults don’t have all the answers. But the Youth Leadership Academy offers help amid the tough times, giving girls words to use and strength to stand on and a belief that they are valuable, exactly as they are.

Simon, with a quirky half-grin, said with a shrug that she’s a little “weird” on the inside.

“A lot of girls are,” she added. “Honestly, all you need to do is be yourself. And be weird.”

If you want to go

To learn more about the Youth Leadership Academy, or to apply, visit michigan.gov/milya or contact Trooper Ashley Simpson at 989-255-6886.