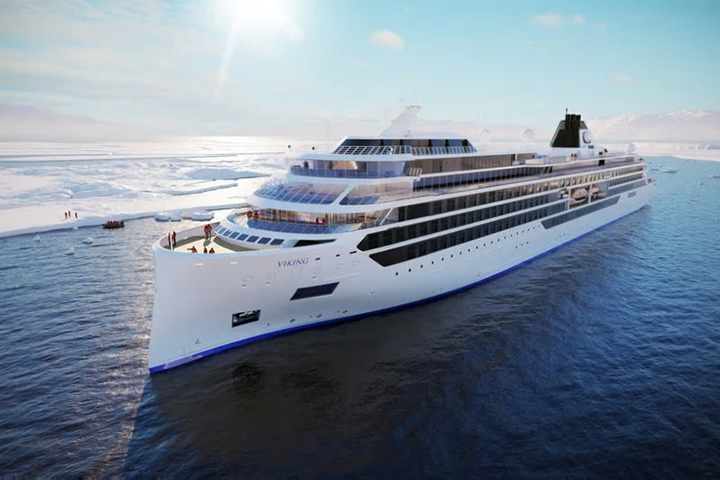 Courtesy Photo This artist’s rendering shows the Octantis, a new ship under construction for cruises expected to begin in spring 2022. The Octantis would be one of eight-day cruises featuring Alpena as a port for passenger excursions.

ALPENA — The effort to make Alpena a premier destination for Great Lakes cruise ships is taking another step toward reality.

Earlier this week, Viking Excursions announced it is building a new ship and increasing its cruise options, featuring Alpena as one of the ship’s ports for passenger excursions.

The ship is currently being constructed and is expected to carry passengers starting in spring 2022. Reservations are already being accepted on the cruise company’s website.

Alpena will be included in Viking’s Niagara and Great Lakes package, which is an eight-day adventure that begins in either Toronto to Milwaukee and includes stops in Detroit, Mackinac Island, Traverse City, and several municipalities in Canada.

Passengers will also be able to get close to the Niagara Falls with a tour through the Welland Canal.

Alpena Harbormaster Don Gilmet said talks between the city, the Michigan Office of the Great Lakes, the National Oceanic and Atmospheric Administration, Viking, and others have begun to intensify, and the possibility of additional cruise ships making more frequent stops in Alpena is increasing.

Although the cruise is being promoted by Viking, Gilmet said, there is still work to do to be sure the ships and the passengers are accommodated properly and the effort to attract other cruise ships is still in the early planning stages.

Still, Gilmet said, Alpena seems to be on the verge of becoming a larger hub for the cruise business. He said the state has been pushing for more cruise traffic on the Great Lakes and is heavily involved in the process.

“Nothing is set in stone, and this is all in its infancy, but Alpena will likely be more of a cruise ship destination, and not just for Viking, but all of the other cruise lines, as well,” Gilmet said. “The focus of the on-shore excursions would be focused on the shipwrecks and other recreational activities. We are still working through early logistics of things.”

NOAA oversees the Thunder National Marine Sanctuary, where dozens of shipwrecks have been identified and preserved.

According to Viking’s website, Alpena is in line for eight visits by the new cruise ship from April to September 2022.

The new ship, which is called Octantis, will be the biggest cruise ship on the Great Lakes and larger than the M.S. Hamburg, which visited Alpena on several occasions over the last two years.

Once constructed and set sail, the Octantis will feature a laboratory for resident scientists and some from NOAA, with whom Viking has formed a new partnership that will allow for research to be done on the ship.

The Octantis also has a launch area where excursion crafts and portable submarines that can hold six guests can be launched for educational tours below the lake’s surface.

There will also be pools, restaurants, spa services, and other amenities for passengers.

The ship is currently being constructed in Europe.

NOAA Maritime Archaeologist Media Coordinator Stephanie Gandulla said the Octantis’ visits to Alpena would allow more exposure to the Great Lakes Maritime Heritage Center, the sanctuary, and other aspects about Alpena that passengers will appreciate and enjoy.

“The fact that an adventure cruise line such as Viking is drawn to Alpena is really a testament to the quality of the resources we have here,” Gandulla said. “We’re proud to be able to show them off, and this is just an awesome thing for everyone involved.”

If Alpena is to reach its full potential as a cruise ship destination, Gilmet said, there will need to be planning and investment in infrastructure in and around the city.

When the Hamburg stops in Alpena, it anchors just off the mouth of the Thunder Bay River and passengers are shuttled to shore. In the future, Gilmet said, it would be nice to have the ship dock in the river, but that would require dredging the river and other improvements.

Gilmet said he hopes the next progression in the process will be to have passengers spend the night locally. He said that would allow the ship time to refuel, send out laundry, and restock food and other items. More importantly, he said, it would allow visitors more time on shore to shop and enjoy Alpena’s nightlife.

“From the city’s standpoint, we want them to spend the night,” Gilmet said. “The longer they are here, the more they are going to spend at our local businesses.”

Finding funding to make the needed improvements could be a challenge.

Gilmet said the Michigan Economic Development Corp. is also involved in the cruise ship discussions, and, for any of the large projects to become a reality, there would likely need to be partnerships with local, state, and private companies.

“The infrastructure would not be cheap, and is more than we would be able to do ourselves,” he said.

Initial pricing for the eight-day cruise on the Octantis start at $5,995 for a basic cabin and climbs to $14,695 for the Owner’s Suite.