City can’t say if 1,680 water lines made of lead, state gives no money to replace 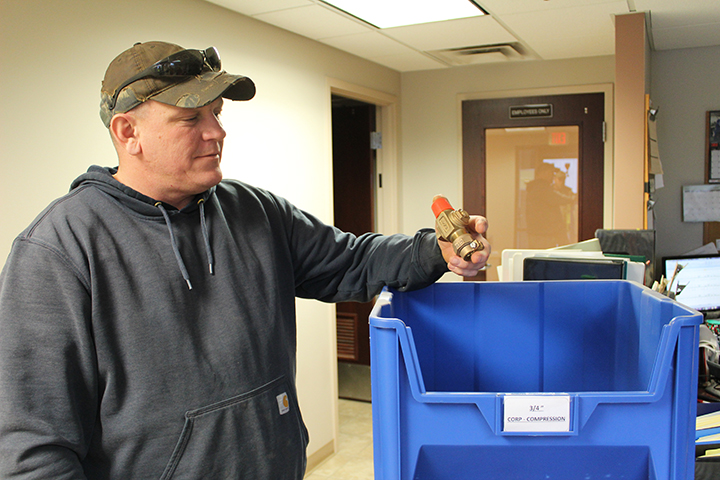 News Photo by Steve Schulwitz Alpena Department of Public Works employee Greg Nowak shows off a small piece of the inventory of non-lead fittings which can be used to replace any lead fitting in the water system. There is also an inventory of larger pipes that can be used to replace lead service lines when needed. The state has required municipalities to remove all lead from their systems by 2040 without offering any funding to help cover the cost.

ALPENA – Unless Northeast Michigan government officials are willing to tear up every street, it is nearly impossible to know the exact number of lead water pipes still in use.

In Alpena alone, city officials aren’t sure of what material 1,680 service lines are made.

Other communities, such as Hillman and Harrisville, estimate much lower totals of lead service lines in existence in their municipal water systems.

After the Flint water crisis, in which untreated water allowed lead to leach from pipes into residents’ drinking water, state officials decided they needed to do more to protect residents. Some of the state’s new regulations, however, could put local governments in a financial bind for years, with little help from state government to cover the costs of the infrastructure improvements now mandated.

In early 2018, the state imposed regulations requiring local governments to replace all lead lines and fittings – called “goosenecks” – over the next 20 years.

Local governments are expected to change at least 5% of lead lines each year to chip away at the project. Galvanized lines that were connected to lead pipes will also need to be replaced.

The state, however, has not committed any funding for the improvements – which would cost thousands of dollars per line. The responsibility of the replacement would fall on the utility provider and municipality, which likely means water fees would go up to cover the cost of the projects.

And, because of the way records are kept, it’s nearly impossible for local governments to know the exact scope of the problem.

“You would have to rip up every road and tear everything up to be certain,” said Mike Glowinski, utility manager at Suez, Alpena’s water and sewer management company.

Suez officials told the Michigan Department of Environment, Great Lakes, and Energy they estimate five of the 4,665 service lines in the city are made of lead, and 80 others that are likely lead. Officials estimate 2,000 likely do not contain the metal.

A verification report must be submitted by Jan.1, 2024.

There are, however, still the 1,680 service lines about which the city is unsure. Also unknown are the number of galvanized lines that were previously attached to a lead line.

The pipes are treated with a chemical meant to prevent corrosion, which was not used in Flint, leading to the disaster.

Glowinski said the report to the state was based on documentation on construction, replacement projects, and inspections spanning the last 30 years, but there is no way to know for certain if there are some lead service lines still in service.

He’s confident it’s a small number, though, because water service was built in much of the city built after the use of lead had ceased.

Still, Glowinski said, there could be some lines, either from the water main, or from the curb to a home or business, that could be lead.

The city’s ordinance says property owners are responsible for repairs or replacement of service lines that run from the curb to their homes.

The new state law, however, would force municipalities to replace those lines if property owners are unwilling to do it on their own. The service lines that run from water mains to the curb are the responsibility of the municipality.

City Engineer Rich Sullenger said it would cost a resident between $2,000 and $3,000 to have a lead service line on their property replaced, and between $3,000 and $4,000 to have one of the city lines swapped out.

‘WE’LL HAVE TO DIG THEM UP’

Harrisville Department of Public Works officials say there are no lead service lines in use, but there could be some goosenecks that are not connected that need to be accounted for.

Harrisville DPW spokesman Tom Keerl suspects 90 gooseneck fittings need to be examined to be sure they aren’t lead, but he is confident they aren’t.

“At some point, we’ll have to dig them up and investigate them,” Keerl said. “If they need to be changed, we’ll change them. But, overall, we’re in really good shape, because we have a newer system and, when most of it was installed, lead really wasn’t being used anymore.”

According to the report submitted to DEGLE, Hillman is sitting pretty. The report claims there are zero lead service lines, fittings, or other piping that was connected to lead pipes. Village Manger Dave Post said most of the village’s water infrastructure has been replaced since 1975.

Rogers City City Manager Joe Hefele said his team reported to the state that the city has no lead service lines. He said the city is already planning for the future, when the next step in the state’s process is due.

Municipalities have until the end of 2024 to verify and prove to the state that their initial inventory of lead in their systems is accurate, and have until 2040 to have it all removed and replaced.

“We don’t have any, but we are developing a plan to inventory what we have and prove it,” Hefele said, “We hope to have that done and rolled out in a couple years.”

The state has also lowered the safety standard for lead. The federal standard is 15 parts per trillion, but the new state minimum is 12 parts per billion.

Lead, by the numbers

A look at lead water service lines in Alpena:

∫ 4,665: Total number of water service lines in the city

∫ 5: Known lines made of lead

∫ 80: Lines likely made of lead

∫ $3,000: Possible cost to have each service line on private property replaced

∫ $4,000: Possible cost to have each city service line replaced