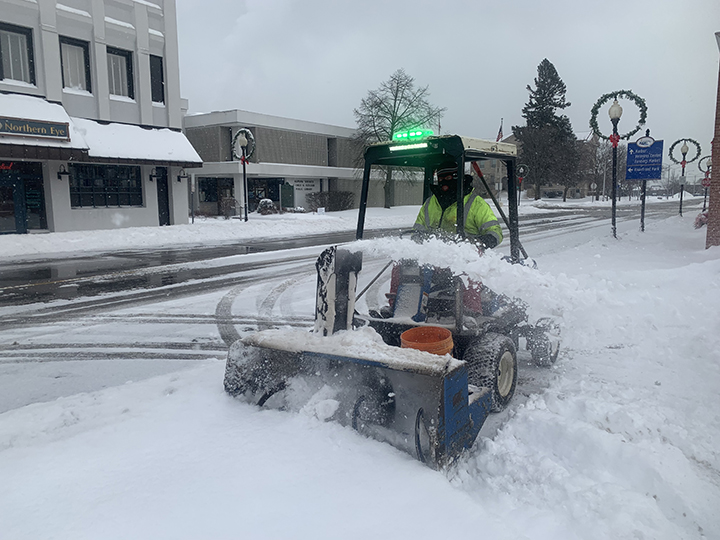 News Photo by Steve Schulwitz The Alpena area didn’t receive the foot or more of snow that was forecasted this past weekend, but Northeast Michigan did get from two to six inches, depending on location. That was enough for residents to spend Sunday clearing driveways, sidewalks and streets left from aftermath of the storm.

ALPENA — Residents in Northeast Michigan were busy Sunday snowblowing, shoveling and plowing the remnants from the snowfall from winter storm Isaiah, but thanks to heavy rains in the southern parts of the state, the storm had lost a great deal of its power, sparing the area from the foot or more of snow that was forecasted.

After receiving a couple of inches of snow and some light icing Friday evening, residents spent Saturday tying up loose ends in preparation for the storm. By 10 p.m. Saturday the snow and high winds arrived, but it had lost a lot of its bite and the snow totals predicted in warnings for the area were amended to the low side.

National Weather Service Meteorologist from the Gaylord Office Jeff Zoltowski said as the storm moved northeast through the state, it wreaked havoc in the southern and central counties of Michigan, where there was flooding and severe icing. By the time it arrived locally however it had burned out somewhat and didn’t pan out the way it could have.

“We saw some of the moisture that we expected to reach the Alpena area get dumped as rain downstate, which helped,” he said. “Then there was a slight shift to the east, which also changed how much of the brunt of the storm reached your region.”

Zoltowski said in Alpena and Presque Isle Counties there are reports of as much as six inches of snow and as little as three, which was far below the forecasted amounts from Saturday.

He said those areas received more snow than Harrisville and Lewiston, which each received about four inches. The office was still waiting for reports from other communities around Northeast Michigan with their snowfall amounts, but Zoltowski said the amounts are probably similar.

Still, Zoltowski said, Alpena and its surrounding communities received the most snow in the state and the largest amount in one burst since a storm on Dec. 1 dropped about six inches.

So far this winter the area is lagging behind the average snowfall it typically receives through this point on the winter. According to the National Weather Service Alpena has received only 27.7 inches of snow, which is well below the average or 34.9 inches through January 12. The seasonal norm is 84.3 inches, so there is some make-up work to do if that average is to be met.

Driving conditions were the best in Alpena, but alpena County Emergency Service Coordinator and 911 Director Mark Hall said there were few issues from accidents. He said the situation could have been much worse if the area had gotten what was predicted.

“We are pleased that we didn’t get what we thought we were going to,” Hall said. “Things went well and there weren’t any major issues.”

Hall said he is concerned about other potential hazards.

He said people have been driving snowmobiles and other off-road vehicles on the ice when it isn’t safe. He said the ice is not strong because of the freeze and thaw cycles we have seen this winter and with a fresh cover of snow, it will be impossible for people on the ice to recognize dangers with it.

“This isn’t your typical year and the way the ice has been made has made it weak,” Hall said. “I don’t think there is any ice that is safe to be on right now.”