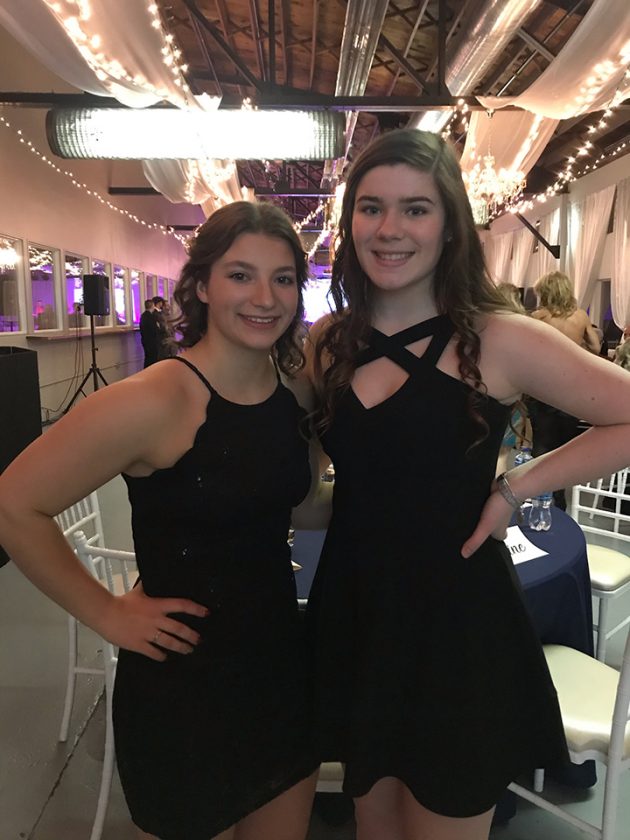 ALPENA — Alpena High School students Madison Timmreck and Jade Gray are proof that working out and eating healthy has helped them both inside and outside the classroom.

On Saturday, Timmreck and Gray were two of the 19 honorees at Bay Athletic Club’s Fitness Inspired Gala at Fletcher Street Depot. The event recognized individuals who have made big changes in their life.

Gray — a junior at Alpena High — tore her ACL and meniscus during a travel volleyball game last year. Recovery time was supposed to be nine months, but thanks to help from her surgeon, trainers, family, and friends, she was back working out in five months.

“A majority of it was mental work,” Gray said. “I had to be really self-motivated and luckily, thanks to the gym and great physical therapists, I had a lot of positive people around me. A lot of it was telling myself ‘Alright, let’s beat the odds. Let’s get back.'”

Timmreck — an Alpena High senior — is a student athlete who considered her school practices workouts. She started workouts during the offseason thanks to the Wildcat Sweat program at Bay Athletic and that changed her life for the better.

Since she was working out all the time, Timmreck saw results because she was able to throw farther in the shot put and discus and also improved on the volleyball court.

“I realized how much I enjoyed working out outside of sports, so then I kind of started to do that more often and it became a habit,” she said.

Being honored Saturday was a big deal for both Timmreck and Gray. They know they’re inspiring others to live a healthy lifestyle.

“I didn’t think it wasn’t going to be a big deal, but it really is,” Timmreck said. “I feel honored that I get to help other people (and) try to inspire them and hopefully they can kind of make some of the changes that I made.”

“I’m humbled,” Gray said. “Since a lot of my story was my comeback, I would say that I looked to a lot of different people and a lot of different success stories for motivation when I was coming back and it really means a lot to me to hear that I’m inspiring other people.”

Both say that working out has helped them at school. Gray said exercising helps her anxiety-wise, because with a full schedule of sports, school, friends, and work, it helps her release energy and relieve stress.

“I’m more focused when I’m working out,” Gray said. “This has been really phenomenal.”

Working out leaves Timmreck at piece and refuels her to do her homework at night. It also keeps her energized.

As for advice she would give to other teenagers, Gray said working out and being healthy makes her feel better about herself. She said it’s also a huge confidence booster.

When people feel better about themselves, it makes them a more positive person, Gray said.

“I’m more engaged when I’m at school, I have more energy when I’m out of school,” she said.

Timmreck said working out gives her a sense of who she is because it helped her discover who she wants to be as a person. She also said exercising can open people’s eyes to a career they never thought they could do.

Alpena resident Larry Donajkowski was named the most inspirational person of the year at the event Saturday. He lost almost 100 pounds in a year and ran a half-marathon on New Year’s Day.