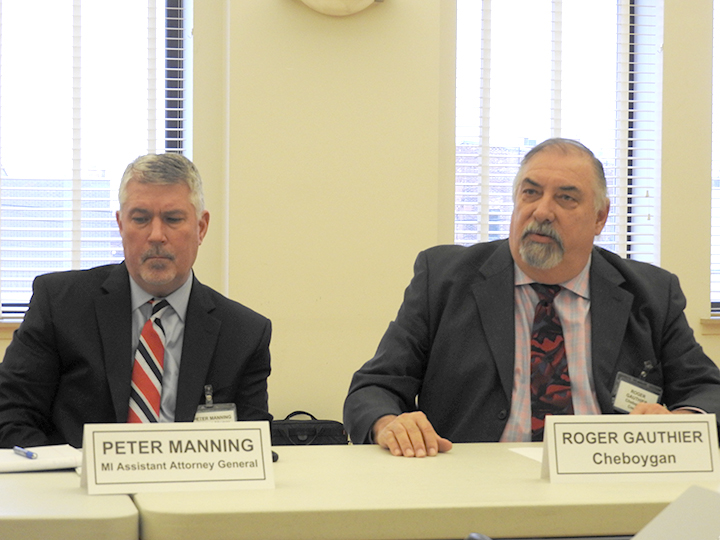 On Friday, Manning spoke at the Alpena County Library to officials representing governments and political organizations from along Lake Huron’s shoreline. Manning was invited to Alpena by the Iosco County Democratic Party to talk about the risks of Line 5 and what the Attorney General’s Office is doing to address those risks.

Manning, who is chief of the AG’s Environment, Natural Resources and Agriculture Division, highlighted an incident in April 2018 when the pipeline was struck by the anchor of a lake freighter. He cited a report that noted anchor strikes are a major risk to underwater infrastructure.

“What the office is focused on for legal action is the anchor-strike possibility,” he said.

Other risks include a one-in-60 chance of a rupture in the next 35 years, Manning said, which has the potential to cost nearly $2 billion and have other “intangible costs,” such as damage to the state’s branding.

“A worst-case spill in the (Straits) has been estimated to release 2.5 million gallons, which is about twice the size of the oil spill that happened in Marshall, Michigan,” Roger Gauthier, founder of the group Straits of Mackinac Alliance and chairman of the Cheboygan County Democratic Party, told the group in Alpena on Friday.

A separate Enbridge pipeline ruptured in Southwest Michigan in 2010, spilling nearly a million gallons of oil that made its way into the Kalamazoo River and through Battle Creek.

Enbridge spokesman Ryan Duffy told The News on Friday the pipeline is “very safe” and all of the company’s inspections show that. He said Enbridge completed a hydrotest on the line a couple of years ago, which showed the line was in good condition.

“All of our tests and inspections show it’s in good condition, but then we’re going above and beyond for safety with the tunnel project,” he said. “That is a huge safety enhancement that makes what has been a safe line safer. That’s our focus moving forward.”

Building a new pipeline through a protective tunnel in the Straits was part of a deal Enbridge struck with former Gov. Rick Snyder. Duffy said Enbridge has committed to begin constructing the tunnel next year and complete it by 2024. He said the company will pay the $500 million cost of the project and already has invested $40 million for rock and soil sampling to be completed in the Straits.

Additionally, he said, the project has a number of levels of safety and protection.

In the meantime, Duffy said, Enbridge is also adding safety measures in the Straits, such as boat patrols monitoring ship traffic to make sure there aren’t any ships in distress and watching anchor positions on those ships.

He said the company will also put in some high-definition cameras in the Straits to aid in monitoring the ship traffic and will have an electric warning signal emitted to alert ship traffic that it is a “no anchor zone.”

When Democrat Dana Nessel became the state’s attorney general last year, Manning said, it was quite clear Line 5 was her number-one priority.

“This was absolutely one of the first things that she wanted us to address,” he said. “So, it’s incredibly important to her.”

Nessel authored an opinion in June that concluded a bill signed by Snyder related to the tunnel project violated the state constitution. As negotiations between Enbridge and Snyder’s successor, Democrat Gretchen Whitmer, broke down in June, Engbridge sued the state, challenging Nessel’s opinion in the Court of Claims.

Later that month, Nessel filed suit against Enbridge in Ingham County Circuit Court to revoke the 1953 easement, which grants Enbridge the right to use the lakebed and waters in the Straits.

Manning said both parties have filed motions and that a conference before the judge overseeing the case is scheduled for Jan. 31.

Line 5 transports light crude oil and propane from Superior, Wisconsin through Michigan to Sarnia, Canada. A portion of the pipeline runs along the lakebed between the Upper and Lower peninsulas where lakes Michigan and Huron meet.

Enbridge says Line 5 transports about 540,000 barrels of propane and crude oil per day. The pipeline was originally constructed in 1953 and is now 67 years old.