Back to work, firefighter recalls injury at ReStore blaze 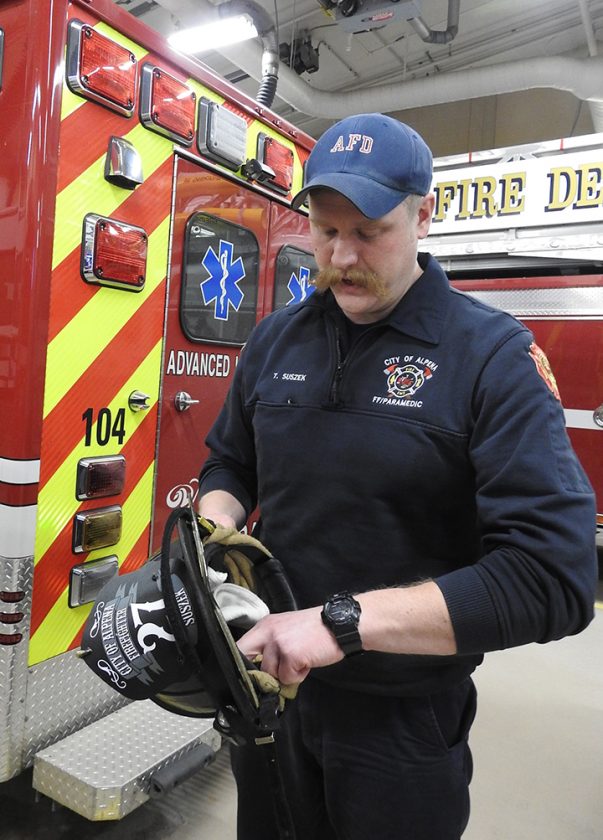 News Photo by Julie Riddle Firefighter/paramedic Tyler Suszek explains how his helmet probably saved his life while he fought the fire that destroyed the Habitat for Humanity ReStore in Alpena in early November.

ALPENA — “Undoubtedly, it saved my life,” the firefighter said, speaking with deep appreciation for the black, brimmed helmet that recently stood between him and a falling brick.

Tyler Suszek, a longtime firefighter/paramedic with the Alpena Fire Department, returned to work this week more than two months after a wall crumbled on top of him as firefighters fought the fire that destroyed the Alpena Habitat for Humanity store on Nov. 3.

The fire, thought by fire investigators to have been started by an electrical short, began at the store just as shifts were changing at the fire station almost directly across the street. Within moments, firefighters were on the scene.

Suszek, called in from home on his day off, worked with a handful of other firefighters at the back of the building, where three garage-style bay doors held back raging flames hot and strong enough to prevent firefighters from entering the building.

The roll-up doors were starting to sag, but the surrounding concrete block walls and overhang seemed stable, Suszek recounted.

Hoping to ventilate the building and get more water onto the fire, firefighters used a 10-foot pike pole to try to pull down the garage door. After several others had tugged at the doors, Suszek grabbed the pole and had a go at it.

“I grabbed the pike pole, and walked up, and that was pretty much it,” Suszek said.

Suszek gave the door two good pushes. In an instant, the walls and overhang collapsed about his head and shoulders, knocking him to the ground and piling around and on top of him.

In moments, the firefighter said, his fellows had him out from under the wreckage and hustled to an ambulance that was hurried around to his side of the building.

“I was in good hands,” Suszek said of the coworkers who gave him instant medical help, despite his efforts to wave them off and get back to fighting the fire.

A head gash, which Suszek thinks was caused by the helmet’s internal structure coming unlatched, required a dozen staples. Suszek also lost a toe, some part of the falling debris slicing an angry gash through his thick leather boot.

“It just popped it right off,” Suszek said cheerfully Wednesday, back in uniform after being cleared by a doctor to return to regular 24-hour shifts.

Another firefighter, also sent to the hospital as a result of the Habitat fire, received treatment for breathing difficulties.

Training and equipment updates are able, usually, to prevent major injuries in a profession in which taking risks is part of the package.

Minor injuries are common, though, Suszek said, calling it the expected consequence of any manual-labor job. He was injured a few years ago when he fell through a hole in a floor while working at a fire scene, injuring his shoulder.

A forgotten risk, possibly even greater than that of a burning building, Suszek said, is found on icy corridors with traffic screaming by. He relayed the story of a paramedic killed earlier this month in Pennsylvania when he was struck by a passing truck while working at an interstate crash.

Everybody, when they’re young, wants to be a firefighter, Suszek said.

Now, as an adult, it’s the only job he wants to do, regardless of the potential danger. There’s always more to learn, always ways to evolve, always something interesting just around the corner.

And, like the rest of the men and women who inhabit fire stations across the region, he does the job because it’s a way to help people and protect a community.

After two months of elevating his foot, wearing a medical boot, and hobble-chasing the kids around the house, Suszek is glad to be back to work, making medical runs, training, teasing the other members of his shift, and staying ready to be called to go fight a fire.