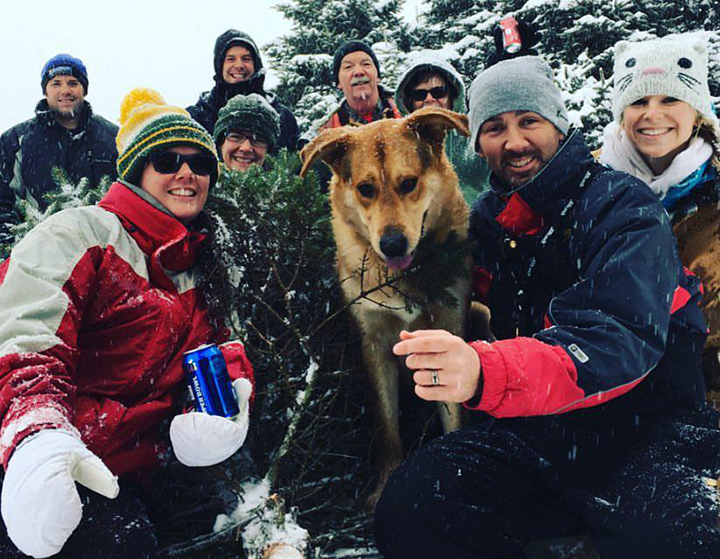 Courtesy Photo This photo shows, in the first row, from left to right, Leanne, her dog, Monster, Erik, and Cortney, in the second row, Lauron and Laurie, and, in the third row, Steve, Robbie, and Ron, at the Holiday Tree Farm in Grand Junction.

Sometime during the late 1950s or early 1960s, my father, Dr. M. Vincent Scudder, created a 6-foot-diameter frame for a Christmas wreath out of lath and chicken wire he probably removed from the house during the remodeling of my brother Steve’s and my bedrooms.

Each year, in the weeks leading up to Christmas, our family would visit the woods in the Alpena area to “harvest” a sufficient number of spruce, pine, balsam, fir, and cedar boughs for Dad to use in creating the wreath.

Dad labored for a week or more each evening, attaching the boughs to the frame by hand.

Somewhere, he got some large, 8-inch pine cones, and had our mom, Bette (Potter, of the Potter’s Jewelry Store family) create a large red ribbon, tying it into a 3-foot-long bow so the wreath had the proper aspect from a distance.

Dad then hung the wreath on the red shutters on front of our home at 441 S. State Ave., a few blocks from downtown. It was large enough to cover the entire front window.

Dad then installed a spotlight on the house to illuminate the wreath after dark.

I can still picture him standing on the top step of the stepladder, aiming the light, but l don’t recall him ever falling!

After several years of repeating that process each Christmas, Dad had Billy French, a local welder, create a new, stronger, frame from steel, which dad then covered with fence wire. The new frame reduced the time it took Dad to create the wreath to only a few hours.

Dad got sick in 1985, and couldn’t do the wreath that year. Steve and wife Melba (Avila, of Tomball, Texas) was in Virginia Beach, Virginia, and I was in St. Joseph, Michigan, so we couldn’t do it for them.

After Dad passed away in 1986, my mom felt that the wreath was “Dad’s thing,” and she decided to end the wreath tradition on our childhood home on State Avenue. Steve did not express an interest in the frame, so it became mine and I moved it to St. Joseph.

The winter of 1986 found our family, including Laurie (Fournier, of Alpena) and our two children, Lauron and Steven, resuming my dad’s (their Papa’s) tradition.

We traveled to the Holiday Tree Farm in Grand Junction, Michigan, owned by a Palisades Nuclear Plant coworker of mine, to harvest the boughs and a Christmas tree. Then we all helped to assemble and hang the wreath in St. Joseph.

That first year, Laurie made it into a winter outing, complete with a picnic lunch of sandwiches and hot chocolate. During the outing, the owners were target-shooting on the farm property, and they encouraged us to enjoy their property every year. In the following years, we added our next two children, Robbie and Leanne. Over the next several years, numerous boyfriends, girlfriends, and pets joined us for the annual outing. The most recent trips now include Robbie’s wife, Cortney (Howlett, of Grandville, Michigan), also of St. Joseph, and Leanne’s husband, Erik Skowronek, of Weston, Wisconsin, the son of Norm and Nancy Skowronek, of Alpena.

We upgraded the original hot chocolate and sandwiches to more “age-appropriate” beverages and snacks, including cheese and crackers, similar to a “tailgate party.” Over the years, we have included chopping dead trees, axe-throwing, target shooting, and always take a walk around the property to view a nearby river and swamp.

The outing now ends with a family dinner in a nearby South Haven restaurant.

In 2018, we added a fourth generation to the “wreath team,” with the addition of Leanne and Erik’s then-7-month-old daughter, Ronnie Claire, who joined us for her first trip.

Son Steve Lives in Coloma, Michigan, and daughter Lauron now lives in the State Avenue house, still owned by Steve and me.

Maybe we’ll get another wreath frame made for her?