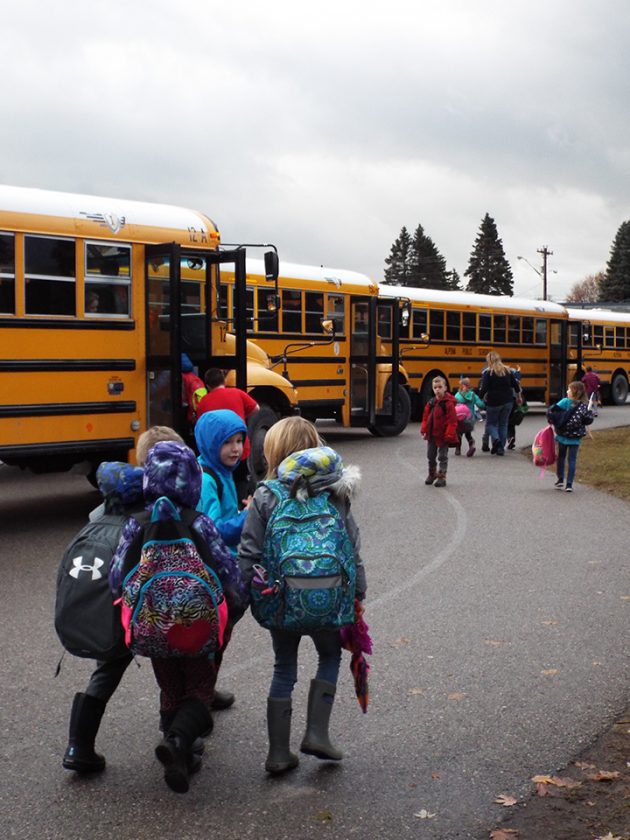 News Photo by Julie Goldberg Besser Elementary School students get on the bus after school on Wednesday.

ALPENA — School buses take students to and from school, to sporting events, and on class field trips.

But, over time, buses wear down. Parts break. Rust forms.

Local school districts work to keep buses up-to-date and safe for students, but many buses in Northeast Michigan are showing their age.

Model years for the 86 school buses in Northeast Michigan districts are as old as 1999 and as new as 2021. Some districts purchase new buses, while others take the risk and purchase used buses.

Even with safety on the front of local superintendents’ minds, purchasing a bus or two each year comes at a price. The four districts that provided information to The News about their most recent bus purchase spent a total of $335,013 for new and used buses.

With recent cuts from the state and prices climbing on everything, districts have to get creative to make the vehicles last as long as safely possible.

Alpena Public Schools Superintendent John VanWagoner said his mechanics have welded new panels to the bottom of buses that rust out, along with replacing wheel wells.

“We literally take the buses that we have off road and take every part that’s still usable and use those on those old ones when they break to try to keep them going,” VanWagoner said.

WHEN DISTRICTS REPLACE AN OLD BUS

Local superintendents say buses should last between 10 and 15 years — longer, if a district is lucky.

“A bus can maybe last 20, if the maintenance has been spot-on,” Alcona Community Schools Superintendent Dan O’Connor said. “We utilize our older buses to supply parts to add longevity to our bus fleet.”

Joe Collins, transportation director for Alpena, said older buses are replaced based on whether or not they’re safe to transport students.

Onaway Area Community Schools Superintendent Rod Fullerton said that, if a bus spends a majority of its time on a route with rougher back roads, it may not have as much longevity as a bus that’s spent more time as a spare or designated-trip bus.

“The district has a mechanic perform a full inspection prior to purchase,” Seiter said.

‘IT IS THE TOP PRIORITY’

Superintendents say safety is the number-one priority when it comes to school buses.

“We want our students to feel safe from the moment they get on a bus, during the school day, and when they get dropped off at the end of the day,” O’Connor said.

The state red-tagged seven buses in Northeast Michigan school districts in the 2018-19 school year, according to the most recent publicly available data.

Five of Alpena’s buses have been flagged by the state, and the district has been told that those buses will not be allowed on the road next year, VanWagoner said at a recent board committee meeting. He said the district has applied for money from the state’s recent settlement with Volkswagen over the automaker’s admitted efforts to cheat emissions standards, hoping Alpena might get enough money to buy four buses.

“We’re thinking January or February that we might know,” VanWagoner said. “We’re going to face the point here where we’re going to have to buy some buses. We’re at that point. It is something that we depend on so much.”

“Student safety always comes first, no matter what aspect of education is involved,” Posen Consolidated Schools Superintendent Michelle Wesner said. “Bus safety is no different. It is the top priority.”

HOW DISTRICTS BUDGET FOR BUSES

School districts budgets each year with the hope of saving enough money to purchase a bus or two.

Alpena purchased a school bus in July through the Michigan School Business Officials Bus Purchase Program. That allowed the district to skip the bidding process, order the bus right away, and have it before the school year started in August.

Hillman has submitted an application to the state’s Volkswagen settlement rebate program to replace its current diesel buses with propane-fueled ones. Seiter, the superintendent, said the district currently has six buses that qualify.

“The district could have as many new buses as six, or not be awarded any,” said Seiter, who is also the superintendent of Atlanta Community Schools.

Seiter said Hillman and Atlanta take out loans for bus purchases, since the districts have smaller budgets. That spreads the purchase out over six years.

“This saves on the large cash outlay, but does result in financing costs,” he said.

Alcona buys outright or finances, depending on enrollment and revenue.

Voters in Posen approved a bond sale in 2012 to purchase buses, Wesner, the Posen superintendent, said. That generated $680,000 toward the buses and technology infrastructure.

Fullerton said Onaway voters approved a sale in May 2016 that helped the district purchase seven new buses, among other items.

“Prior to the bond issue, we were only able to purchase used school buses,” Fullerton said. “This process worked for several years for us, but it did contribute to an older fleet.”

Rogers City Area Schools Superintendent Nick Hein said the district budgets based on when it expects to replace a bus. Recommendations come from Transportation Supervisor Kirk Schaedig regarding when a bus needs to be replaced with a new one.