Alpena man to travel the globe on bicycle 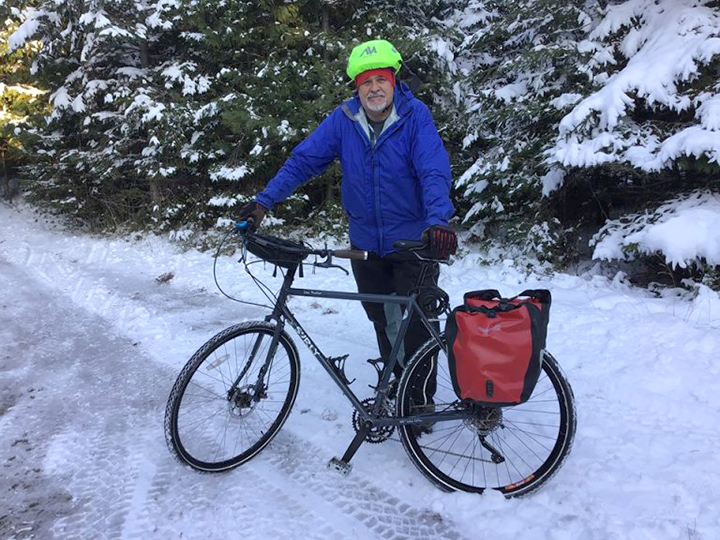 Courtesy Photo Alpena resident Bill Saint-Onge is pictured here with his bicycle. Saint-Onge says he will circumnavigate the world on his bicycle beginning Dec. 13.

ALPENA –An Alpena man is set to circumnavigate the world on his bicycle.

Bill Saint-Onge arrived in California on Wednesday and is set to begin the first leg of his journey on Dec. 13.

Saint-Onge will spend the next 14-months peddling his bike across the globe. He says he’ll travel 35,000 miles, including the flights between continents, and visit 25 countries.

“I may be retired, and I may be considered elderly by many people, but I am not ready to sit down on the couch in front of the TV,” he said. “I have kind of a fear of doing that, in a way, and this trip grows out of that, as much as anything else. Just because you’re 70 doesn’t mean you’re done.”

Saint-Onge was born in Alpena, raised in Midland, and worked as a former Michigan Child Protective Services worker in Detroit for “decades.” He started a family in Ann Arbor, but has been divorced for around 30 years. He returned to Alpena after he retired to be closer to his mother and is also her caretaker.

Saint-Onge said he has always liked to travel and stays active by backpacking, canoeing, and kayaking. He said he began bicycling the year he retired “totally out of the blue,” when he was getting ready to sell his son’s bicycle at a garage sale.

“Just on a whim, I got on it to ride around the block, and that was it — something clicked,” he said. “At that time, too, I was starting to have a lot of trouble with my knees, so it was becoming a lot more difficult to do the canoeing and the backpacking.”

He said biking doesn’t hurt his knee. He called his bike an “adaptive device” that gets him to places he wouldn’t ordinarily be able to go.

It’s not the first time Saint-Onge has undertaken such a journey, as he started “traveling with a vengeance” about seven years ago. He said he has been able to travel on his bicycle six months of the year and returns to help with his mother for the other six months.

Saint-Onge has made three trips across the U.S. He made it across Canada two-and-a-half times and traveled once from Tampa, Florida to the Yukon, where he then rode south to Alaska.

He also wanted to make it around the world before, in a trip that would have been segmented over four years. Saint-Onge started out on a trip to Asia, but was unable to finish the trip when his bike was hit by a bus. He said he had stopped at a bank to convert some money and left his bike chained to a pole when the crash occurred.

“It was a big vehicle to do as much damage as it did,” he said. “When I came through the crowd, I saw my bike laying there, still chained to the post, magically transformed into something else. So that was the end of the riding portion for that.”

Saint-Onge said he stayed in Asia for the next few months, traveling by foot, local buses and tuk-tuk, which is an auto rickshaw, before heading back to the U.S. He said he is looking forward to traveling to India for “round two” on this trip.

“I know not to park my bike to where the bus might hit it this time,” he said with a laugh. “I’m really looking forward to India. I think, of all of the countries that I will be going to, that one fascinated me the most when I was there and I’m spending an extra-long time there.”

Saint-Onge said he has managed to get the weight of his gear down to 16 pounds, 4 ounces, which fits easily onto his bike. He said he has everything from his clothing and toiletries to a tent, cooking equipment, bicycle supplies, and medical supplies.

His journey will be a self-supported effort, which means he will travel without the help of a support team or support vehicle. The trip is also self-funded, except for donations he receives through a Go Fund Me fundraiser.

Saint-Onge had raised $4,375 as of Friday afternoon, out of his $8,000 goal. He will use those funds to help cover the cost of any repairs he might need on the trip and to help cover the expense of his international flights. His fundraiser on gofundme.com is Cycle The World.

He will also document his trip on his blog, longhaulrider.com.