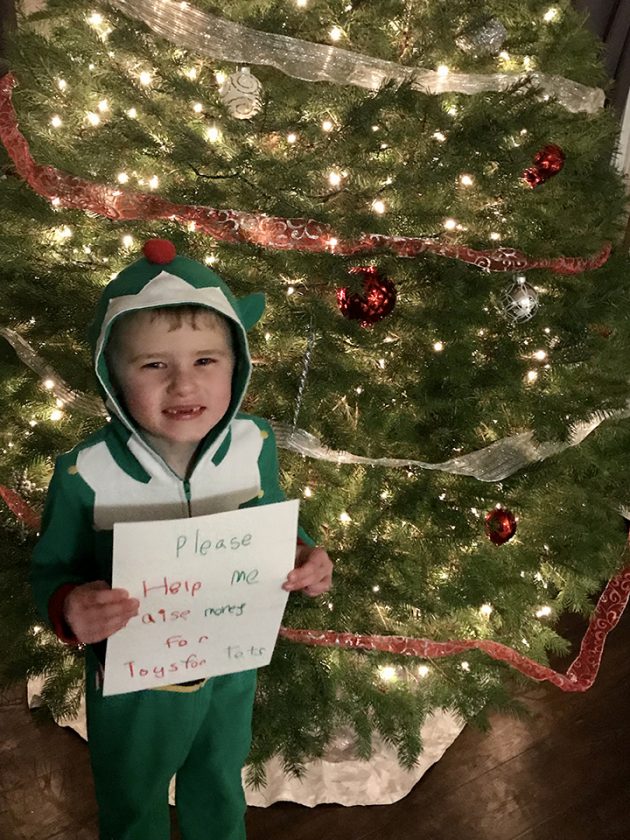 Courtesy Photo Philanthropy begins at home, as evidenced in the giving spirit of 6-year-old TJ Lappan, who is raising money to buy Christmas toys for other children.

ALPENA — A little boy with a big heart is ready to take a plunge to bring joy to kids less fortunate than himself.

“I’ll just buy one of each toy at every store,” said TJ Lappan, an optimistic Alpena 6-year-old raising money to buy toys for the Vietnam Veterans Chapter 583 Toys for Kids program.

Learning from his dad that more toys were needed to meet the program’s goal, TJ decided a fundraiser was in order.

Enlisting his mom’s help to post an appeal on social media, TJ set out to earn enough to buy a stack of toys to deliver to the Toys for Kids collection center next to Nieman’s Family Market in Alpena.

“We could get a stack of presents taller than the ceiling,” said the boy, confident that his fundraiser has the power to do just that.

As a special education teacher who is also involved in the Alpena Boys and Girls Club, Lappan has, over the years, made it a point to expose her own children to others’ struggles.

“They have what they need,” Lappan said of her children. “I want them to realize that not all kids do.”

TJ has been a regular part of his parents’ work in helping others, from offering small but willing hands to help with a fundraiser to sorting and delivering food at the monthly Alpena Feed the Need pop-up pantries his dad helped organize.

It’s a family tradition to go shopping for Christmas presents for needy kids, Lappan said. This year, hearing of the toy shortage, TJ wanted to do more.

Lowering his sights to a more attainable $500, the lad with a shy smile and bright eyes sent out a request: send him money to buy toys, and, if he reaches his goal, he’ll go jump in a lake.

Entranced by the polar plunge conducted on Long Lake each year to benefit Special Olympics, TJ decided to make a chilly dip the end goal of his own personal fundraising campaign.

Though TJ is gung-ho to do a full-on polar plunge, his mom convinced him to wear a water skier suit.

“I feel a little more comfortable with that,” Lappan laughed. TJ plans to plop through a hole his dad cuts in Long Lake’s icy crust, near enough to the shore so he doesn’t go in over his head.

The water, he expects, will be pretty cold, but he’s excited about the possibilities of being a frozen-lake jumper.

He, his mom, and his younger brother plan to stop at several local stores Sunday, using whatever money is donated to buy Hot Wheels, Legos (including “girl Legos,” he said), and other goodies for children who might not otherwise have gifts to open.

He hopes the donations he receives will be enough for him to buy Christmas gifts for 800 other kids.

Asked why he wanted to raise money, his answer was simple.

“So kids get toys for Christmas,” he said.

As for what those lucky kids will do when they open their presents, TJ had it all figured out.

“If it’s chocolate, I prefer they eat it,” the young philanthropist said philosophically. “Or if it’s a toy, play with it.”

Donations may be made to TJ’s Toys for Kids until Sunday through PayPal (email: melissa–lappan@yahoo.com) or Venmo (@Melissa-Lappan), or by dropping off at Lappan Agency,180 S. Ripley Boulevard, Alpena.