To be part of ‘something amazing’ 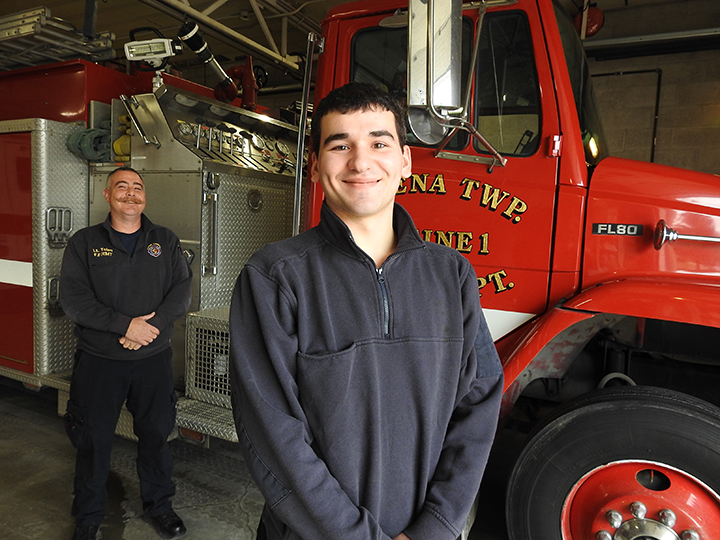 ALPENA TOWNSHIP — The North Side Fire Station in Alpena Township feels like home.

A fire truck-shaped mailbox bids a friendly welcome to the station’s front room, where a cozy table lamp and tropical fish in a tank flank a dining room table, patriotic placemats giving off a sit-a-spell vibe.

The room, and the little back bedroom where blankets and pillows wait for weary bodies to snatch and hour’s rest, are home — for 24 hours at a time — to six full-time firefighters and emergency medical technicians who rotate through the station.

Some of the station’s regulars, younger than the rest, spend hours at a time cleaning trucks, checking equipment, and going out on calls.

First, though, they have to do their homework.

For the past two years, a cadet program organized by Lt. Tom Tolen has brought young, eager, 15- to 18-year-old faces into the North Side family.

The program, designed to give prospective public servants a taste of life in a fire house, has convinced at least one young person that a career of helping others is the life for him.

Tolen’s cadet program, which he promotes in the local high school, invites young people considering a career in firefighting, medicine, or law enforcement to commit to participating in trainings three times a month, once on their own and twice side-by-side with current firefighters/emergency medical technicians.

The young people are also invited to come to the fire station any time they like, Tolan said.

Matt Benedict, 19, used to spend a lot of time at the station when he was in the cadet program.

So much so, Tolen said, that they often had to kick him out at the end of the day.

Now, Benedict, who spent one year in the cadet program, is an official member of the Alpena Township Fire team as a paid-on-call first responder.

“It’s a good opportunity to be around people who have respect for themselves and the people around them,” Benedict said, a smudge of black on his cheek leftover from the medical transfer from which he had just returned.

The first obstacle he faced in the program, Benedict said, was learning his place in the program. The eager cadet always wanted to be the first in the door at a scene, Tolen said with an affectionate smile, and from his first day was asking when he’d be able to drive the fire trucks.

Training comes first, training that can prepare a cadet to be that first one through the door.

The training offered to cadets is the same as that received by full-timers, exposing them to drills, techniques, and life-saving techniques such as CPR.

By the time a cadet ages out of the academy, Tolen said, they may well have earned certifications that they can put into use as soon as they turn 18.

In addition to the trainings, the young hopefuls spend all the time they like at the home-like North Side firehouse. Their time there, however, isn’t all about the excitement of zipping around in a fire truck and letting the siren wail.

It’s not about getting the young people to do the grunt work, Tolan said. The hours spent intimately hands-on with the equipment gives them a deep familiarity with what’s where, and what it’s all for.

Benedict, Tolan recounted, once accompanied EMTs to the site of a particularly bad motorcycle-deer crash. Absorbed in their lifesaving work, Tolan and his fellow EMTs didn’t have time to grab medical supplies themselves. They didn’t have time, either, to explain how to find this or how to use that.

“I could tell him exactly what I needed, and he knew where it was,” Tolen said. “He knew these rigs just as well as anyone in the department, if not better.”

The cadet program welcomes six young people at a time — all the teenagers he can handle at once, Tolen said — into the program, at no cost to them or their families.

When they come to the station, they’re treated by everyone there like one of the team, and also part of a family, said Tolen, who checks in with the cadets to be sure they’re keeping up on their studies and sometimes helps them with homework at the station’s dining table.

“I’m going to take care of these kids like my own,” Tolen said, mindful of the parents who have entrusted him with their children.

Treated more as partners than as students, the cadets are pushed to the front of the line by firefighters, Tolen said, given opportunities to dive in and experience as much as possible.

A direct product of that academy, Benedict spent his 19th birthday on two separate medical calls for people who had gone into cardiac failure. Ready, trained, he was part of the line of responders with their hands on the victims’ chests, pumping their hearts back into rhythm.

“It was a very memorable birthday,” the young man said.

It’s hard to hire a new firefighter. Departments statewide struggle to find people interested in the profession — a combination of low pay, long hours, and many other options for young people to consider, Tolen said.

The cadet program was designed to give possible recruits — usually go-getters and natural leaders with a customer service attitude — to consider a profession that may not have been on their radar.

The job of a paid-on-call firefighter/EMT isn’t easy, he concedes. It can mean leaving family dinners and a good night’s sleep, driving for hours to make a long-distance transfer, giving up time for regular trainings, all for just over minimum wage.

“Everything else is on hold, and life goes on without you,” the rookie first responder said.

Then again, he got to pump the chests of people in cardiac failure and bring them back to life.

“Just being able to be a part of that is something amazing,” Benedict said.