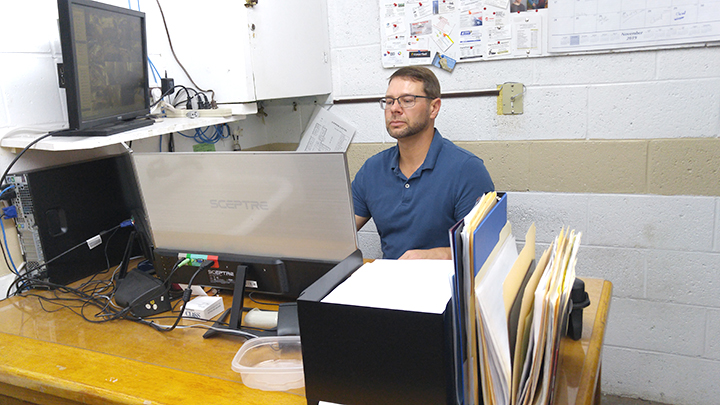 Photo by Crystal Nelson Alcona County Building and Grounds Director Dave Hanson works in his office on Wednesday. Hanson recently compiled a list of repairs and replacements he says are needed for county buildings to operate efficiently.

County commissioners earlier this year asked Building and Grounds Director Dave Hanson to compile a list of needed facility repairs after some unexpected plumbing repairs came up at the county jail.

County commissioners have previously discussed pursuing a new property tax exclusively for building maintenance and improvements, which Hanson supports. No decisions have been made about whether to pursue such a tax.

Hanson said the county needs funding to make some of the large improvements without wiping out his budget or having to dip into the general fund.

Hanson, who has worked for the county since 2015, said the Building and Grounds budget has shrunk as county finances have gotten tighter.

“There’s no money in the budget for long-term planning,” he said. “The Building and Grounds budget right now is made for basically building repairs and upkeep.”

Hanson said that, whenever a project costs more than he has in his budget, the money has to come from the county’s general fund to offset the cost. Hanson would like to see a long-term plan for the Building and Grounds fund.

While Hanson is still gathering cost estimates for all the projects, he anticipates the roof replacement and the replacement of cast iron pipes at the county jail to cost the most.

Hanson said figures provided by Alpena-based TRC Roofing estimate a new roof to cost between $60,000 and $70,000. He said the roof was installed 25 years ago and currently has three known leaks, with one leak over the men’s restroom, a second leak in the drug court office, and the third leak in the county Clerk’s Office.

“Our other big structural issue that we’re dealing with is over at the jail and that’s in conjunction with the jail restroom project,” he said. “When we got into there we realized the original cast iron pipes that are in the jail are all pretty much at the end of their life cycle.”

Hanson said they will have to replace all of the main drain lines under the jail, “which is going to be a very costly, time-consuming project.”

Hanson said he does not have an estimated cost for that project.

At the jail, Hanson said there are valves that need to be replaced with updated units. Hanson said hose valves control the hot and cold water and county officials cannot get replacement parts because the equipment is obsolete. Purchasing new valves will cost the county $1,200 to $2,000, not including additional costs to reconfigure the plumbing to connect to the new valves.

There are also some major repairs needed to the U.S. Forest Service building, which the county leases and of which the county is responsible for. There, Hanson said, the county must replace the roof, all of its windows, and its two furnaces. Hanson said that, in 2015, the roof replacement was quoted to cost $17,000, but county commissioners ultimately held off on the repairs because they don’t own the building.

“How much money does the county put into a building that we don’t own that can be sold at any point in time?” he said, adding the county is still negotiating with the Forest Service to purchase the building.

Hanson said he doesn’t know where the money would come for all of the repairs on his list if not from a new tax. He said they would keep doing what they’ve been doing.

“You keep patching,” he said. “It’s not really neglect, it’s just the lack of funds. The only thing you can do is, instead of planning to replace something before it breaks, when it’s out of date, you’re just waiting for it to fail. And so, unfortunately, that’s where we are at with a lot of these issues, is that they are just literally failing.”