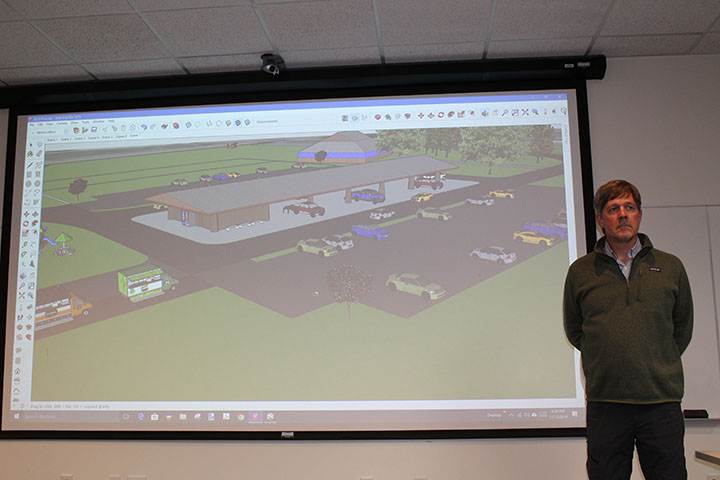 ALPENA — The City of Alpena unveiled its preliminary design plans for improvements to Mich-e-ke-wis Park at a special public input meeting at the Great Lakes Maritime Heritage Center on Wednesday.

Although it is likely there will be some changes to the design before it is finalized, initial designs include a pavilion with restrooms, a bump track for bikes, horseshoe pits, pickleball and volleyball courts, and many other amenities to make the park more usable while retaining its peaceful and tranquil elements. The goal is to also be sure there is enough open area to leave a good view of Thunder Bay and for the park to remain viable for kite-flying and sailboarding.

City Planning and Development Director Adam Poll said the ideas for the park derived from an earlier public meeting at which residents shared their vision of the park. He said those ideas and concerns were considered and some incorporated into the preliminary design.

Poll said the next phase of the project is to finalize and plan and then begin to implement it, which he says could take many years, because it would be very costly to do all at once. He said most of the ideas in the design came from the previous meeting and stressed having a plan that fit the needs and wants of the community is paramount.

“We learned quite a bit, and, ultimately, we took their ideas and made some very preliminary designs, which are not finalized and can be changed,” he said. “The public feedback we receive will help us determine what the park will become.”

The Northeast Michigan Council of Governments has facilitated the meetings and was also involved in the collection of comments on the proposed plans. Poll said involving NEMCOG made sense because the organization has helped draft other city plans and is familiar with the goals and initiatives of not only Alpena but the surrounding area.

Steve Schnell, community development planner for NEMCOG, complimented city staff and the ideas and concerns that came out of the first public input session. He said that, during his visits to Alpena, he has noticed an increase in use at Starlite Beach, where the city already has made large improvements, and believes the same can be done for the adjacent Mich-e-ke-wis Park without stripping the park of its natural charm.

One of the main topics of debate during Wednesday’s meeting was the fact that the current driving and parking loop on the south end of Mich-e-ke-wis would be done away with and replaced by a pedestrian path. Some in attendance Wednesday said that would make it difficult for seniors or people with disabilities to walk from the new parking area, near the pavilion to the far end of the park, which would remain mostly undeveloped.

Others supported the idea of having the gravel road scrapped and walking areas added.

Schnell made notes of the talking points, which will be reviewed.

The plan also calls for a change in location for the heavily used volleyball courts. Currently, six courts are situated close to the shore. They would be moved a touch further onshore and possibly four more courts would be added.

The record-high water levels in Lake Huron and heavy surf this year has washed away a large berm that protected the sand courts, causing significant damage to the courts.

Moving the courts farther from the water would help avoid the situation from repeating itself.

In total there were more than 50 people at the meeting, many of whom made comment.