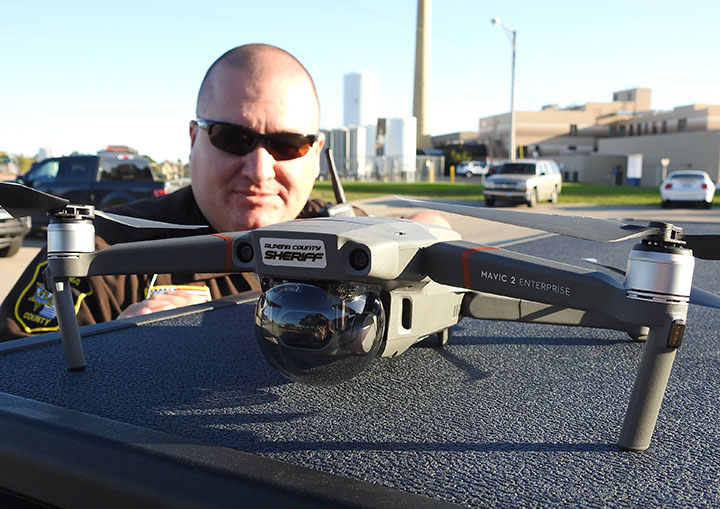 News Photo by Julie Riddle Deputy Michael Lash of the Alpena County Sheriff’s Office holds a new addition to the department, a drone intended for crime-solving and public safety use.

ALPENA — A small boy alone in the woods can be hard to find.

After a recent incident in which an Alpena child was missing for several hours on a chilly October day, eluding human and canine searchers, Alpena County Sheriff’s Office Deputy Michael Lash is more pleased than ever about the office’s recent purchase of an unmanned aircraft systems unit, commonly known as a drone.

Though it was not yet ready for use when the boy wandered off in a wooded subdivision on the evening of Oct. 2, the new piece of equipment will soon give the Sheriff’s Office an eye in the sky, helping officers on the ground assess damage, identify danger, and save lives.

Conversation about purchasing a drone, a device used with increasing regularity by law enforcement agencies across the country, began at the Alpena County Sheriff’s Office after two recent search-and-rescue incidents.

Recently, a man was located in Rockport Recreational Area with the assistance of a private drone operator.

And, during the past winter, rescuers trying to respond to a report of two snowmobilers in distress on the ice of Lake Huron had to wait nearly two hours before a helicopter arrived from Traverse City to assist with the search.

Two hours is too long, Lash said. When someone needs help, time is critical.

A drone, which in some ways functions as an unmanned helicopter, can be airborne within five minutes after its operator arrives on a scene.

The drone features a high-tech standard camera, which gives ground operators an overall view of a scene and can snap photos at intervals that allow it to render a 3-D reconstruction of a traffic incident or crime scene.

In addition to finding lost people, the drone, which will be officially placed into service once it receives Federal Aviation Administration clearance, will also be used to assess damages from natural disasters, analyze crime scenes, and prevent or limit officer injury.

Other public safety agencies will also benefit from the drone, utilizing its capabilities to pinpoint a hotspot in a structure fire or assessing a hazardous materials situation.

“If there’s something I can do to protect a firefighter or find a missing person, I want to do it,” Lash said, holding the lightweight device with feather-like blades that can whirl it hundreds of feet in the air in moments.

The unit will not be used in vehicle pursuits, for issuing traffic citations, or for routine patrol or arbitrary surveillance, Lash said.

Local businesses, acknowledging the value of advanced technology in the hands of law enforcement, donated a total of over $8,000 for the drone and training of two officers.

“It’s another resource,” Lash said. “Not only do we have people on the ground, but we can put something in the air. Imagination runs wild on this.”