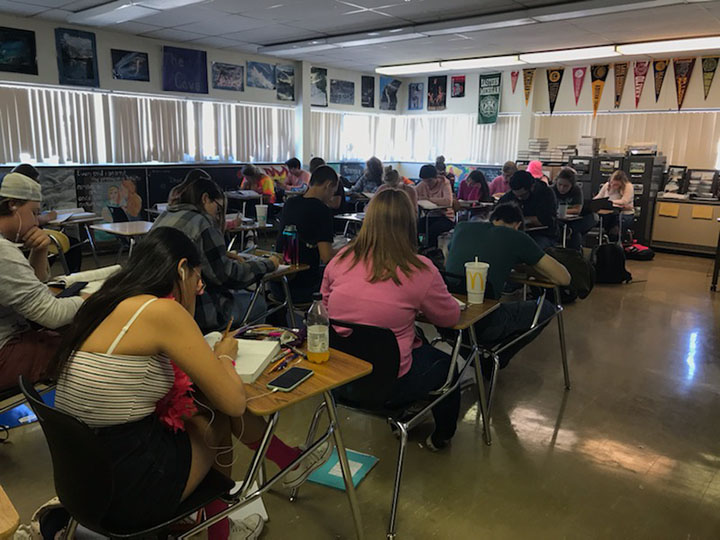 The 511 Northeast Michigan students who took the spring test had an average score of 964.4, according to The News’ analysis of scores reported by the Michigan Department of Education and area superintendents.

Some area schools outperformed their peers statewide on the SAT, an entrance exam used by most colleges and universities to make admissions decisions and is taken by high school juniors every April. The highest score a student can get is a 1,600.

Alpena High Principal Tom Berriman said the school is happy with its scores. When compared to other schools that are the same size and with similar demographics, Alpena is doing a good job, he said.

“We’re exceeding where we should be, based on our size and our challenges,” Berriman said. “We’re pretty satisfied with where we’re at.”

Alcona Community Schools had an average score of 992, higher than the district’s spring 2018 score of 959.4. Superintendent Dan O’Connor said the district’s test score has gone up each year the past few years, so it’s nice to keep seeing improvement.

“Each grade is different, and we had a good one that got close to 1,000, so it’s good improvement,” O’Connor said. “It’s reflective of our district and the awesome teachers and instruction that we provide to our students. We’re happy to see progress every year.”

Carl Seiter, superintendent of both Atlanta and Hillman Community Schools, said it’s hard to dissect results when districts are so small. Fewer students taking the test means one student’s score can throw the average off by large numbers year to year.

“I am not trying to make excuses, but it does explain a perceived up-and-down fluctuation in the average total score,” Seiter said. “Both Atlanta and Hillman are trending up over the last couple of years. This is good news, but each class must be looked at individually to see the merits of our work.”

Hillman had an average score of 967.4, higher than its 2018 average of 950.7. Seiter said both districts have plenty of work to do and staff in both Hillman and Atlanta are working hard to improve student outcomes for each class.

Onaway Area Community Schools tested the highest out of Northeast Michigan school districts, with an average score of 1,006.4. That score is up from 2018, when students had an average of 952.9.

Superintendent Rod Fullerton said the district did OK compared to other schools in the area. He said the district is being cautious, though, because, with a small district, the average can change easily depending on how well a few students test.

“We’re working to continue improvement,” Fullerton said. “We’re working on emphasizing the importance of the test to prepare them for postsecondary.”

Posen Consolidated Schools had lower test scores than it did last year, going from 967.1 to 961 this year. Superintendent Michelle Wesner said the test is a student’s first attempt at the test, so if they retake it, they have a chance to score higher.

“I’m pleased to see improvement, but I would like to see higher scores and I know our students can do better,” Wesner said.

Rogers City Area Schools also saw its test scores go down, going from 995.2 in 2018 to 929 in 2019. Superintendent Nick Hein said the district will continue to improve scores with the staff and students.

“It’s important to remember that one test score does not define anyone as 74.2% of our students are accepted into college, which is top-40 of all high schools in the state of Michigan,” Hein said.

Both Posen and Rogers City said the scores they received from the American College Board, which oversees the SAT, were different than what was reported on the state’s website. A representative from the Michigan Department of Education could not be reached Wednesday for comment on that discrepancy.

A look at how Northeast Michigan students tested on the spring 2019 SAT.