Learning how to give 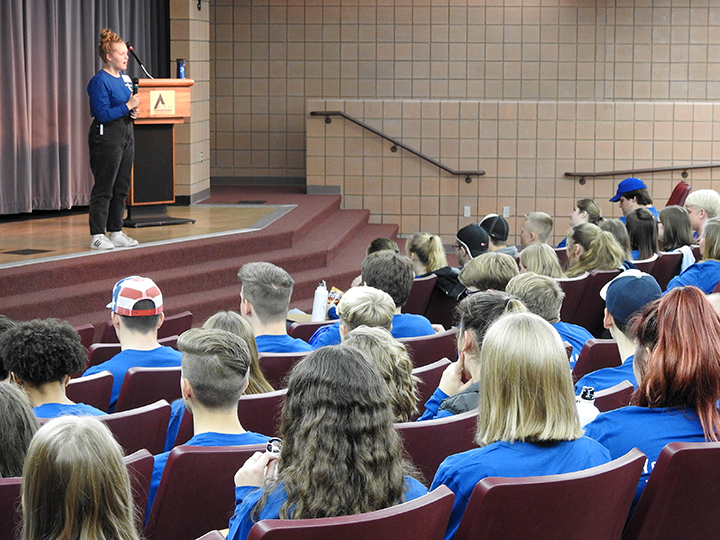 ALPENA — Put money in a teenager’s pocket, and it’s sure to slip out again, used for fast food, new clothes, and smartphone apps.

About 135 teenagers from all over Northeast Michigan gathered Monday to learn about effective and innovative ways to improve their communities by giving away thousands of dollars with the help of an endowment fund made specifically to tap into teens’ abilities to see and meet the needs around them.

The annual fall training for Community Foundation for Northeast Michigan’s Youth Advisory Committee, held Monday at Alpena Community College, offered young people from nine area counties a reminder of why their communities need their help and what they can do about it with the help of $62 million.

Some 20 years ago, the Battle Creek-based W.K. Kellogg Foundation sponsored a challenge to create an endowment fund to be used exclusively by Michigan young people ages 12 to 21 who would be responsible for deciding how to spend the fund’s proceeds to better their communities.

Now worth tens of millions — an amount that grows as individuals learn of its existence and make donations toward it — the fund is tapped by 86 established Youth Advisory Councils across the state. Five percent of the fund is designated each year for grant awards, decided by young people who see their communities through youthful eyes.

“We know what problems we’re facing, what kind of troubles that are actually in the communities,” Clover said.

Teenagers, he said, have every bit as much ability as adults to see the need for change in a community and take steps to make that change.

“Anyone with enough mental fortitude could change the world,” Clover said, surrounded by a sea of blue-shirted young people determined to do just that.

At Monday’s training, presenters from the Council of Michigan Foundations talked to the young people about what makes a good grant, where to develop funds, and how to identify needs in their communities.

Olivia Henry, program coordinator for CMF, said YACers — the affectionate name given the young people who serve on Youth Advisory Committees — grow as philanthropists from their experience on YAC, and also become stronger leaders, more able to contribute to their communities as they become adults.

Jenna Peterson has been a part of YAC since she was in seventh grade. Now a senior at Alpena High School, Peterson credits the program with developing her leadership skills, transitioning her from a shy preteen to a confident young woman who, while still in high school, sits on the board of the Community Foundation of Northeast Michigan.

Making financial decisions on behalf of others has turned her into a much more philanthropic person, Peterson said, one attuned to the needs of the community and aware of her own abilities to meet those needs in ways more impactful than the volunteer opportunities available to most high schoolers.

“I want to help people,” Peterson said. “That’s the end goal in life.”

Young YACers give about $1.5 million in grants statewide each year. The roughly 50 YAC members in Alpena, Alcona, Montmorency, and Presque Isle counties awarded about $50,600 in 2018, helping provide school supplies, supporting environmental issues, encouraging performing arts as a road to mental health, and making sure every child has a Christmas present.

The students at the training said they can see themselves growing as leaders and future philanthropists. Most of all, though, they said they feel the responsibility and joy of being able to help others.

Funds have supported a local thrift store that gives clothes and diapers to foster families in their community, families in which the teens see real, tangible need — including, one of the girls discovered, the family of one of her friends.

“When I was first getting involved in YAC, I was like, ‘Wow. We’re the ones who do that,'” said Ogemaw Heights’ Kylee Sciotti, who has been a YAC member since her freshman year.

A coin drive the teens conducted to for an anonymous family turned out to be helping someone from their own school.

“The money that we raised was given to a lady that lived out of her car with her three kids,” Grace Nowakowski said. “We got to actually realize that these are problems in our community. And we got to help.”