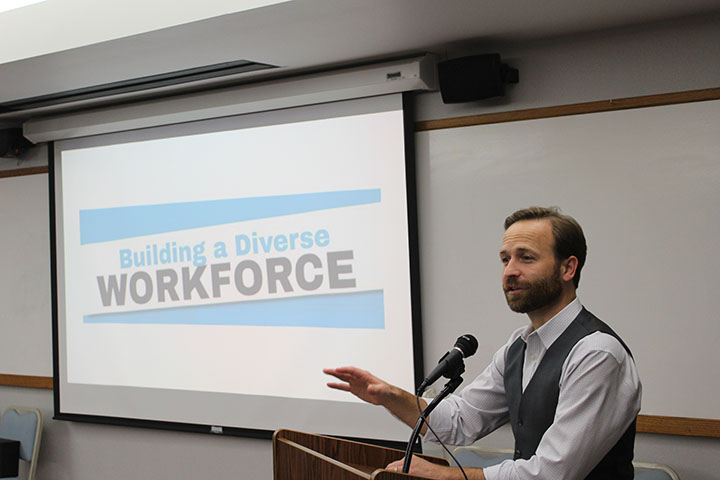 News Photo by Steve Schulwitz Former Lt. Gov. Brian Calley was in Alpena Thursday to speak at Alpena Community College about the importance of hiring employees with disabilities. Calley said businesses that have done so have learned those employees are dedicated and loyal.

ALPENA — Finding employment for people with disabilities not only allows them to be more independent and learn new crafts and skills, but also benefits employers who often struggle to find and retain workers, former Lt. Gov. Brian Calley told Alpena businesses and others on Thursday.

Calley enjoyed a brief lunch with residents and then spoke about the many benefits of hiring individuals who have disabilities and the best ways to do so. He said seminars and training like his talk Thursday at Alpena Community College, could pay huge benefits for employers.

Calley said it is proven that people with disabilities are dedicated employees and show a tremendous amount of loyalty to their employer.

“There is a huge workforce shortage in most industries in Michigan today, and in most of the regions of our state,” Calley, whose daughter has autism and who has been an advocate for persons with disabilities, said. “But there is a very large group of people, hundreds of thousands of people, that many employers really never think about. That is people with disabilities. Too often, we think about the can’t, instead of the can, in terms of what they can do, but, oftentimes, we find that they remain employed for many years and are huge assets.”

Calley said he thinks many businesses don’t hire someone who has a disability because they fear high costs of properly accommodating the health care needs of such employees.

Calley said those concerns are overstated, as there is typically little investment needed to accommodate someone who may have a special need, and he added there are state programs and other organizations that can help with those costs and logistics.

“It really isn’t going to cost anything, and they will get a dedicated employee who is excited and happy to be at work,” he said. “There is a lot of information and help out there for businesses who want to utilize that talent.”

He said there is a need for more employees locally and keeping them is tough, and he thinks hiring people with disabilities needs to happen more often in Alpena.

“I think we are going to have to, as employers, open up our minds, open up our hearts, and find unique and creative ways to be more inclusive and build our workforce.”

Several elected officials and employees from Alpena Township were in attendance.

This past year, the township worked in partnership with North Eastern Michigan Rehabilitation and Opportunity Center Inc. to hire three employees with special needs.

The township was nominated for this year’s Michigan Rehabilitation/Michigan Council for Rehabilitation Services Business Partner Championship Award. Although the township didn’t win, Township Supervisor Nathan Skibbe said it was an honor to be considered. Skibbe said the township’s three employees with disabilities are productive and able to do jobs often forced to be the back burner because of how busy the township’s Department of Public Works staff is.

Skibbe referred to those employees as shining stars and hopes more municipalities utilize the hiring practice.

“It is a wonderful opportunity to help members of our society and our community who need this type of opportunity,” Skibbe said. “I see it as a responsibility of a municipality to give people who are, unfortunately, sometimes overlooked an opportunity for sound job placement. We’re kind of a pilot program, and I would love it if other municipalities follow suit. It is a great way for us to shine a light on these people’s abilities and not their disabilities, and that is important in helping to break up the stigma about them.”