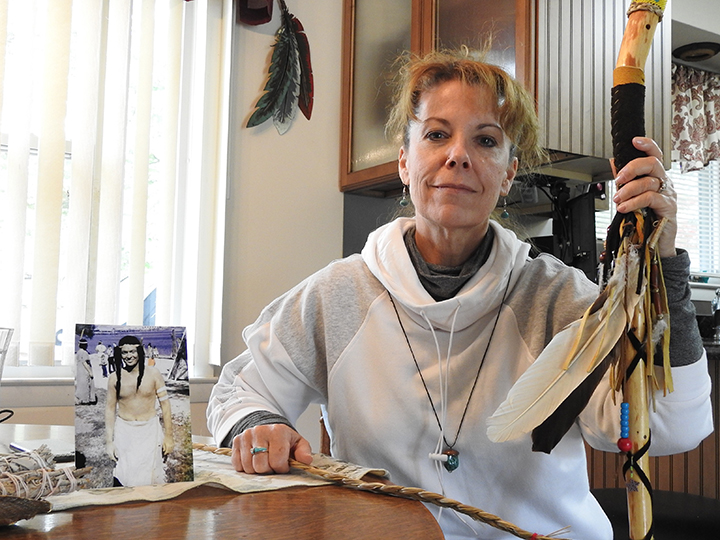 News Photo by Julie Riddle In her Alpena home, American Indian Marie Fielder holds a walking stick, a gift from her full-blooded native father, pictured in the photo at her elbow.

When she was little, Marie Fielder knew she was different.

“I remember being afraid that, if I were a bad girl, I would have to go off to the native school,” Fielder, 55, said.

The Alpena woman with American Indian blood in her veins described a boarding school where, she was told as a child, native children could be forced to assimilate, stripped of their traditional ways and required to learn the English language and English ways.

Discrimination and misunderstanding toward American Indians were a given when Fielder was growing up in the Upper Peninsula.

Her father, a full-blooded American Indian, helped in the 1950s to establish the Sault Ste. Marie Tribe of Chippewa Indians, one of 12 federally recognized tribes in Michigan.

When he began working on the effort, Fielder said, his family threatened to disown him.

When Fielder was growing up, being Indian “wasn’t cool.” Her parents — even her father — were cautious about connecting their children to their heritage, afraid of the discrimination that was an accepted part of American culture of the time.

Rampant racial stereotypes said natives were steeped in poverty and social problems, Fielder said, an image from which her parents hoped to distance her.

“They didn’t want us to be identified as part of that,” she said.

Hoping to shield their children from discrimination, they pushed education — just not about native traditions.

Fielder’s youth, tinted by the fear of native school and her parents’ cautions, transitioned to an adulthood surrounded by a changing world, one in which a societal shift is leading to a surge in appreciation for American Indian history, culture, and people, Fielder said.

The recent national trend toward doing away with Columbus Day celebrations is notable and welcome, Fielder said.

“To me, that’s a farce,” she said of Columbus Day. “Why are we honoring someone who massacred the native people and simply landed here on a boat?”

She applauds the nation for moving toward the possibility of abolishing the holiday and celebrating it for what she said it should be: a recognition of American Indians as our nation’s first people.

Fielder moved to Northeast Michigan at 23, away from the welcoming and increasingly confident community of her Upper Peninsula tribe.

“There’s nothing here” celebrating native culture, she said of her current home, so different from the culturally soaked tribal lands in the U.P.

To be a part of native activities, she has to drive. She drove when her children were younger to expose them to native experiences.

Fielder travels to St. Ignace, Sault Ste. Marie, or Escanaba to reconnect with native people and attend traditional events. Her trips north give her a sense of serenity that can’t be found anywhere but on tribal lands.

“It feeds me,” she said. “I feel like I’m around people who understand me and who I understand. And it is a comfortable feeling.”

People are regularly surprised to learn of Fielder’s native heritage.

Her face, unlike her father’s handsome, classically Indian profile, doesn’t have a native look, she said, instead reflecting her mother’s French roots.

Though she said it would be nice to connect with other local native people, she hasn’t met any other tribal members in the Alpena area in her many years of living locally.

“That’s just not a population that is out there,” she said. “And it’s sad.”

Census estimates show there were 317 American Indian or Alaska native residents in Alpena, Presque Isle, Montmorency and Alcona counties in 2017.

Brought up to respect her heritage but not taught its traditions, Fielder is now, as an adult, reaching out to connect to her origins, learning basket-weaving and quillwork and attending events and classes advertised in an Indian newspaper.

The newspaper contains mini language lessons, from which Fielder is slowly teaching herself snippets of the language of the Great Lakes tribes, called Anishinaabemowin.

Fielder attends pow wows when she can, reveling in their party-like atmosphere and celebration of history and heritage. She described the costumes, drums, dances, crafts and food with relish.

“Best fry bread you ever had,” she added.

‘NATIVE AMERICANS WANT THAT, TOO’

Her father had a walking stick made for his daughter, harvested and prepared for her and dressed by a native man. Two eagle feathers dangle from its leather-wrapped handle, feathers which, by law, only American Indians can own.

A membership card in her wallet means Fielder has rights, as a native, to hunt, fish, and harvest anywhere on treaty grounds, the boundaries of which, she said, extend down as far as Alpena County.

Some years ago, while her father was still living, he suggested the two of them visit a medicine man to receive tribal names. In a ceremony accompanied by sweet smoke from the burning of sacred plants, the medicine man, who knew nothing of Fielder’s life, gave her the name Waa Ba No Kwe — Eastern Sky Woman.

In an Alpena that doesn’t entirely feel like home, the resident with native roots and a yearning for connection speaks for a people who, despite their differences, are, underneath, just like everyone else.

Fielder points around her to a region steeped in Polish and German culture, where meals, traditions, clothing, and even dances allow a people to hold on to and celebrate their heritage without fear of judgement or discriminiation.

“Native Americans want that, too,” Fielder said. “To be able to celebrate in ways that make sense to us, and in the ways that bring us peace.”

The Besser Museum for Northeast Michigan is working to update its Native American Gallery, primarily made up of prehistoric American Indian artifacts, to reflect the more more modern and ongoing role of Indians in Northeast Michigan. It launched that effort recently with a new exhibit on the 200th anniversary of the Treaty of Saginaw called “Native Treaties: Shared Rights.” Visit the museum at 491 Johnson St., call 989-356-2202, or visit bessermuseum.org/history for more information.

Northeast Michigan is becoming more ethnically diverse. Beginning Oct. 26, The News will begin publishing a four-day series examining the experiences of Northeast Michiganders of color and whether the community is doing enough to welcome them.