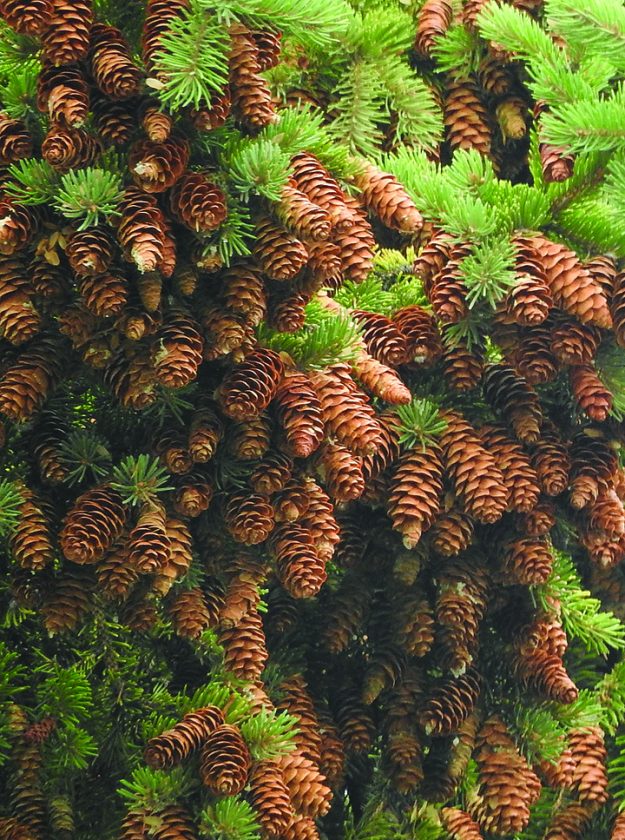 News Photo by Julie Riddle Cones hang high in a spruce tree on Chisholm Street in Alpena. This year’s abundant cone growth does not offer predictions about upcoming weather, but it does help trees to protect their species.

Residents in Northeast Michigan may have noticed top-heavy conifers on their walks in the woods this fall. Conifer cones are growing in what look like frightened clusters at the very tops of spruce trees in the area, as though they are trying to keep their skirts as far from the ground as possible.

Perhaps that’s what leads to the belief, popular among many outdoors enthusiasts, that cones growing at the tops of trees indicates a harsh winter ahead.

Not so, says Joyanne Mittig, forest technician at the Michigan Department of Natural Resources station in Atlanta.

While it’s fun to think that trees predict upcoming snow flurries through their high-hung seeds, this year’s cone behavior is, instead, part of a tree’s regular cycle, determined not by weather but by the trees’ efforts at propagation.

Every tree species goes through a periodic seed year (called a mast year in nut-bearing trees), Mittig explained, following cycles that may be unique to a species and a region. Trees store up energy by reigning back the labor-intensive job of producing seeds until one big production year, when the trees go all-out, growing masses of acorns, cones, or other seeds.

Seed years, with their voluminous seed offerings, serve to ensure the survival of the species. With so many seeds produced, it’s impossible that all will be eaten by wildlife, and, for wind-pollinated trees, there is a greater chance of a successfully fertilized offspring for the tree.

Another reason trees may produce larger quantities of seeds, Mittig said, is stress. Strong though they appear, trees face many stressors, from extreme weather to harsh conditions for trees growing near roads. Trees may, she said, put out excess seeds in a last-ditch effort to reproduce before they die.

All trees experience seed years, explaining the glut of acorns that sometimes fills yards and make a hatless walk in the woods precarious. Mittig, laughing, recalled a year when oak trees were particularly enthusiastic, and recounted college pranks of filling entire dressers with acorns.

“You would just hear cusses coming from every place in the building, and see acorns in the hallways,” she reminisced.

There are “a couple funky wives’ tales floating around out there” about trees, Mittig said, but most are untrue, no matter how much we like to believe them.

“Trees cannot predict weather,” the forester said definitively, though “it would be cool if they could.”

Trees, often kept on the periphery of our attention, live fascinating lives, Mittig said. The oak, which this year did battle with a high population of destructive gypsy moths, has the unusual power of flushing its leaves twice in a season, putting out a second round of new leaves if it senses a problem with the first.

Mittig described sugar maple stands in the Upper Peninsula with 30-year-old seedlings, growing in deep shade but carefully kept alive by their parent trees towering above. Trees, remarkably, can communicate with each other, she said, sending distress signals and other messages through an underground network.