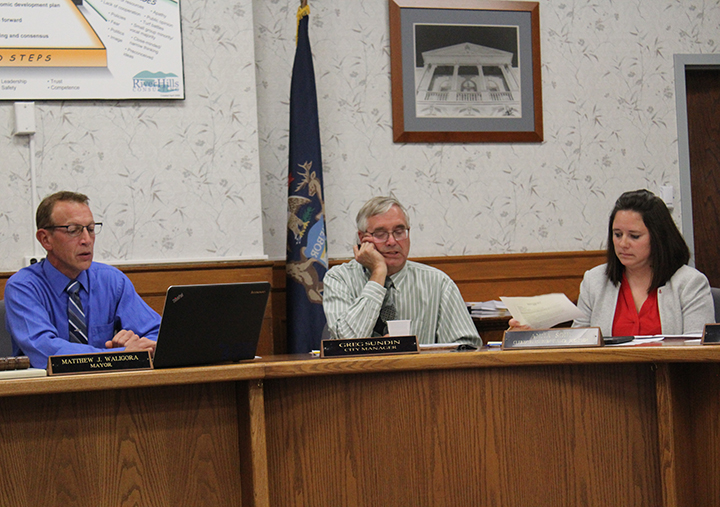 News Photo by Steve Schulwitz Alpena Mayor Matt Waligora, left, City Manager Greg Sundin, and Clerk/Treasurer Anna Soik attend Monday’s Alpena Municipal Council meeting on Monday. The council has cut the field of city manager candidates from 12 to six during. Whoever is selected next month will replace Sundin, who is retiring in December.

ALPENA — The Alpena Municipal Council has narrowed the field of candidates for the next city manager down to six after reviewing a dozen resumes during closed session at its meeting Monday.

Although the names and details of those finalists weren’t released, they will be later this week, once the candidates are notified, Mayor Matt Waligora said. The council didn’t release the names at the meeting because each of the candidates had requested confidentiality through the process.

Open interviews of the candidates will take place on Oct. 5 and then the council will deliberate and select a successor to current City Manager Greg Sundin shortly after.

Sundin is retiring in December.

Walsh Municipal Services’ President Frank Walsh, who was hired to lead the candidate search, said he has received 39 resumes for the job and described the field as diverse. He said local residents applied for the position, as did others who live in Michigan and some from outside of it.

Waligora wouldn’t say if any of the finalists are local.

Waligora said he is pleased with the quality of the applicants and believes the city should be able to offer the job to one of the remaining candidates. He said he is eager to meet all of the finalists in person.

“They were all impressive, and I’m excited to learn more about them during the interviews,” Waligora said. “I think I can speak for everyone on council that we are very pleased with the quality of the 12 candidates and actually all of the 39 that applied.”

“We need to reach out to them and tell them they are finalists, and we would rather not have them find out in the media,” Waligora said. “I’m sure there could be some who also haven’t notified their current employer and we wouldn’t want to interfere that way.”

∫ voted to allow Mayor Matt Waligora to sign a grant application to the Michigan Economic Development Corp., on behalf of the Friends of the Thunder Bay National Marine Sanctuary, for nearly $3.9 million. The grant would lead to the construction of a park/sports complex near the Great Lakes Maritime Heritage Center. The MEDC approached the city and said there was money available for the project and urged the city to apply for the grant. The local match is 10%, $433,038, and need to be raised by Friends of the Thunder Bay National Marine Sanctuary.