‘These kids have a ball’ 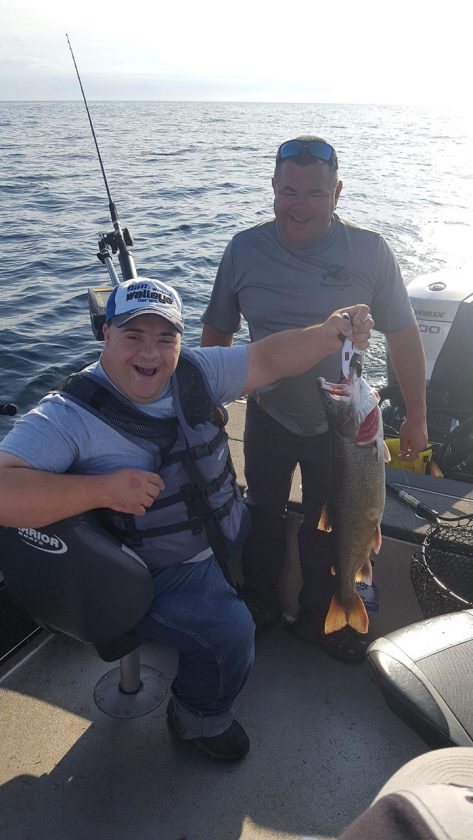 Courtesy Photo Carl Hatala, left, and Nick Stephen show off a lake trout that was caught during the Wish Fish event in Alpena Saturday. Local charter captains and the Northern Michigan Region Chapter of Safari Club take special needs kids fishing on Lake Huron and let them catch fish. After their time on the water they all had a pizza party at Dinosaur Gardens in Ossineke.

The event, called Wish Fish, allowed the children and their families to fish with seasoned anglers on Lake Huron and then enjoy an after party at Dinosaur Gardens.

According to Safari Club member Scott Gauthier, the Wish Fish event was formed after seeing the joy children had on hunting trips and excursions. He said fishing trips allow the club to include more kids at one time and is a great way for them to spend some time on a boat and land a Lake Trout or other fish native to the great lakes.

“The kids have a ball,” he said. “A lot of these kids have never caught a fish before and when you see their faces after they get one it’s really amazing because they are so excited. It is a pretty cool deal for them and us.”

Six local captains provide their boats, tackle, fuel, time, and fishing knowledge so that the kids can make memories. Gauthier said without them, and their generosity, Wish Fish would be difficult to pull off.

“The captains and the businesses who have provided everything we need help us make this possible. they don’t do it for recognition for themselves, but do it for the kids,” he said. “We are thankful to have their support.”

Gauthier said even though this year’s event has just ended, he is already looking forward for next year. He said the goal is to get more kids on the boats and fish on their lines.

“To be honest we have a hard time finding kids and we have more captains willing to take kids out if we can get more,” Gauthier said. “The more kids we can get, the bigger and better the entire event will be.”

Gauthier said anyone who knows of a special needs youth who would be interested in Fish Wish can contact him at (989) 657-1168. He said kids from around the state are eligible, but a majority of the ones who participated Saturday were from Northern Michigan.