‘Got to get them to move’ 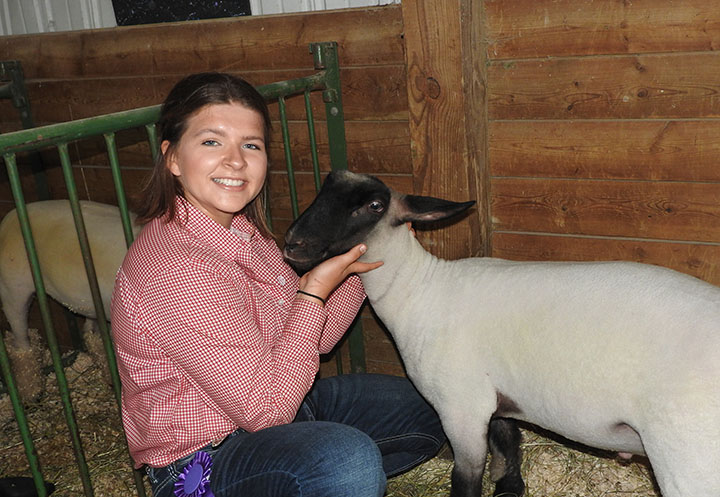 News Photo by Crystal Nelson Demi Oliver poses with the sheep she raised to market for her 4-H project on Friday following the annual auction at the Alpena County Fair.

Each year, 4-H members interested in raising an animal for market choose their preferred species of livestock for their annual project. But, before the animals even make it to the auction ring, members spend countless hours feeding, watering, caring for, and training them.

Brooke Gersewski, who was named the 2019 4-H Member of the Year, said a livestock project is a “very big commitment.”

Gersewski said she has raised every kind of livestock except for chickens, and ended up raising this year’s grand champion market hog.

“A lot of people don’t think of the work that goes into the animal, like you’re taking care of it every day, making sure it’s OK all the time, walking your animal,” she said. “It’s hot during the summer and the animals don’t want to walk, but you got to get them to move.”

Demi Oliver said a lot of people think 4-H members just feed and water their animals, but that’s not the case.

“You have to walk with your animal, work with your animal to first of all get them ready to show, but you want to get them to be most presentable with the judge and make them look the nicest they can,” she said.

Oliver, who is enjoying her last year in 4-H, received grand champion prize for both her market lamb and goose. She also received reserve champion for her pheasants.

“The market books teach you a lot, but also selling the animals and raising the animals teaches you a lot of life skills,” such as leadership and communication, she said.

Brynn Kasubowski, of Alpena, began showing animals two years ago when she was old enough to do so, but has been involved with 4-H for a total of four years. The 4-H program requires an individual to be 8 years old before they raise a market livestock project.

Kasubowski raised this year’s reserve champion roaster hog, as well as her pen of rabbits. She also raises sheep for auction.

Kasubowski said it’s harder to sell some animals than others, because of the bond that’s made with them.

“With market rabbits, you don’t really work with them as much, so they’re a little easier to sell, versus a lamb, where you’ve worked with it so long and you spend a lot of time with it,” she said. “Then, it’s a lot harder.”

But Kasubowski said she keeps coming back because it feels good to make a bond with the animal and that raising an animal for 4-H is fun.

Kasubowski said she uses the money she receives from the auction to fund her livestock project for the next year. She also bought herself a Chromebook computer and put the rest of the money into her savings account for college.

Oliver and Gersewski also save the money they receive from the auction for college.

“When you get rewarded with a grand or reserve (champion) animal, you’re almost in shock because you can’t believe all your hard work has finally paid off and you’ve done that great,” Gersewski said.