After embezzlement, midway mixup, board strives to do more 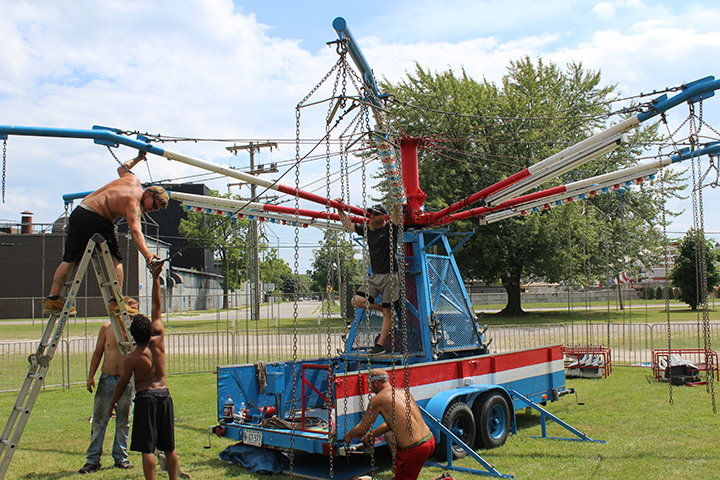 News Photo by Steve Schulwitz Crews put together carnival rides for the Alpena County Fair on Monday so they will be ready to go today. The Alpena Fair Board is trying to bring the fair back to its glory days by providing quality rides, entertainment, and exhibits.

ALPENA — The Alpena County Fair Board has received its share of criticism over the last several years, but the board is working hard now to not only host the best fair possible but also win back the trust of the public.

Fair Board President Jacob Bowen said there are a lot of new faces on the board, which now has a blend of people of different ages and backgrounds. He said everyone is well aware of the scrutiny the board is under after a former board member was arrested and charged with embezzling money from the board last year and a scheduling conflict made for a skimpy midway at the 2018 fair.

Bowen said that, despite the negativity surrounding the board, steps have been taken to help ensure there isn’t a repeat of those incidents. He said the board has redone its bylaws and are dedicated to being a stronger board than it was before. Bowen said he has noticed the community is very forgiving and most people still support the board and the fair.

“Unfortunately, this is something that we have carrying with us in the back of our minds when approaching sponsors, but our past is there and it isn’t going away,” he said. “We owned up to the mistakes that were made, and I think we are a stronger board because of it. Our number-one goal is to have the best fair possible and to operate as a board the way we are expected to.”

Former Fair Board treasurer Bradley Avery pleaded guilty to one count of embezzlement of more than $1,000 and less than $20,000 from a nonprofit. He was sentenced to six months in jail, one year of probation and 60 hours of community service. He was also ordered to pay thousands of dollars in restitution.

The Avery incident wasn’t the only issue the board has had to battle through. Since the Great Recession hit in 2008, there has been a drop in attendance and there has been some gripes by those in Alpena about the quality of the carnival and entertainment options. Last year, the fair’s midway vendor ended up double-booked, meaning it had to split its rides between Alpena and another fair.

Bowen said the 12-member board and many volunteers and sponsors are addressing the quality of the fair, bringing back more rides and a variety of entertainment, such as the Superkicker rodeo.

He said making sure the fair is profitable is also important.

“Our end goal is always to end in the black, because we don’t want to struggle making cuts or cutting back on entertainment,” he said. “We want to give people the best fair that we can. We want to have the big events and more of them. We want to see the carnival, grandstand and barns packed like it was when I was a kid.”

At the fair today