Building bots and battling the Plagiarizer 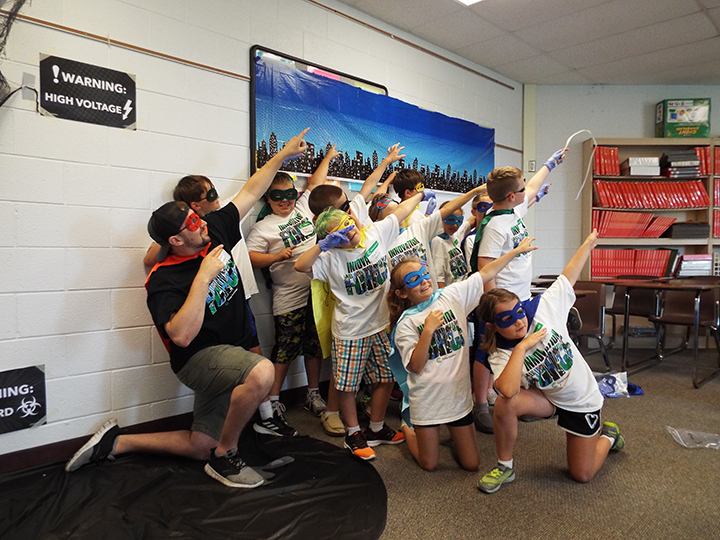 Camp Invention is a STEM camp for students entering kindergarten through sixth grade. Camp Director Brittany Giordano said local parochial and public school students attended, along with some who traveled from Petoskey.

In the Innovation Force station, students dressed as superheros to battle the evil Plagiarizer, a supervillain who is out to steal the world’s greatest ideas. The students worked to create a device to retrieve the stolen ideas. 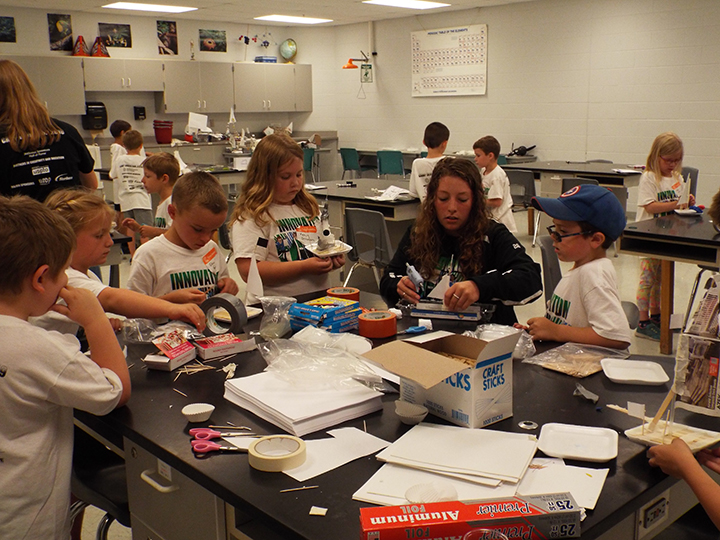 Students build their boats at the Deep Sea Mystery station during the camp.

Deep Sea Mystery had the students working on a research adventure at sea to dig up fossils. Giordano said they learned about how scientists figure out if a fossil is something that’s around today or if it’s extinct.

“They’ll build boats during the week to figure out how scientists use pulleys and simple machines to go down underwater and do investigations,” Giordano said.

Sixth-grader Carter Koproski said his favorite part in Deep Sea Mystery was building the boat, because he loves boats. 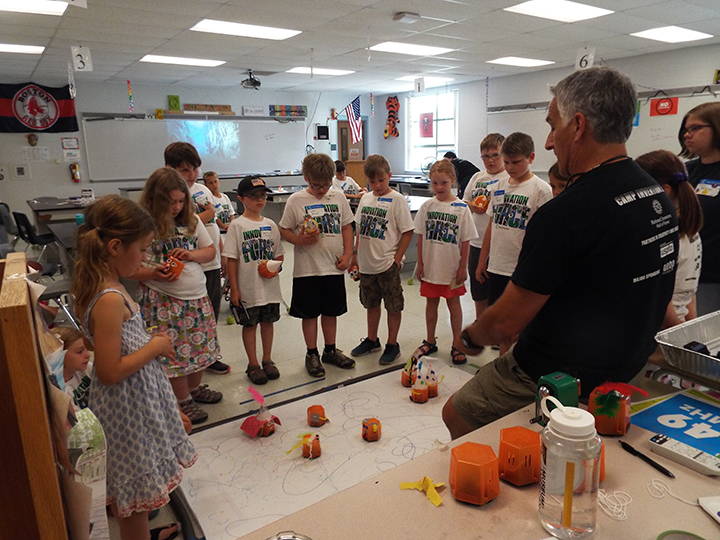 Camp worker Charlie Giordano, right, talks to students about the robots they built at the DIY Orbot station.

Camp worker Kara Gehrke helped students in Deep Sea Mystery learn about boats and what happens if those crash.

“They made sailboats and we had all the supplies, but they could make them however they wanted,” Gehrke said. “We sailed them, we tested how much weight could be on them, because we have to have research equipment on those sailboats. They created whatever they wanted and each sailboat was unique and different to each child.”

The camp put students in charge of managing their own farm as they learned the basics of running a business for Farm Tech. They learned fundamental coding techniques to maximize their time and profits.

“They have to build a device that’s going to make their farm clean and sustainable,” Giordano said. “They can earn moolah throughout the week to help them buy things for their farms to help them build a better machine.”

Byce said students learned in the ins and outs of running a farm and grew their farms bigger each day. On the last day of the camp, they were able to go to a bank and see their farm come to fruition. 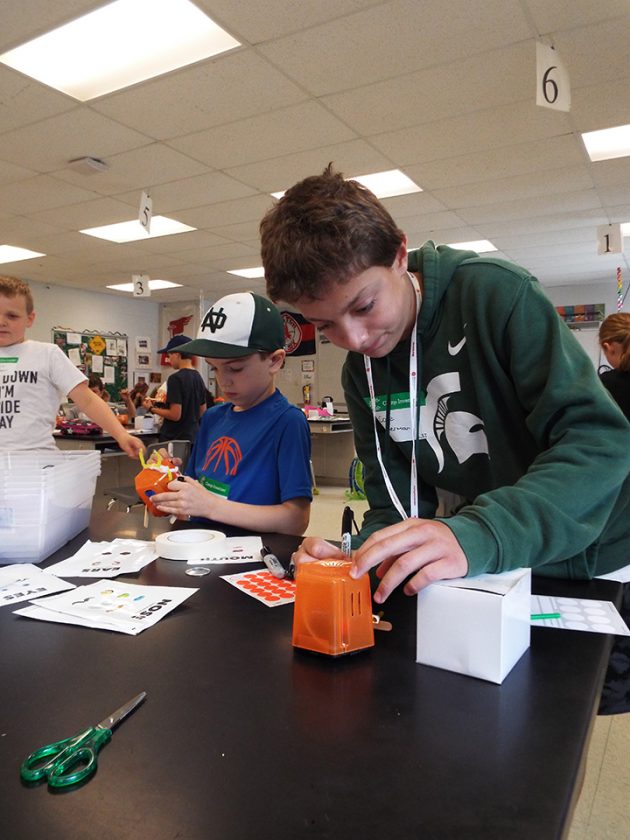 Fourth-grader Paul Whaley and seventh-grader Cole Herman build their robots on the first day of camp.

Students built their own robots as they learned about frequency, circuit boards, motors, and gears as they worked to build a remote-controlled robot.

With the robots, the students completed different tasks throughout the week. Giordano said they added different parts to their robot to do the specific tasks each day.

Dingess said she loved writing different inventions because she loves thinking of new things to make. She wants to try and create some of the inventions in the future that she thought of while at camp.

Camp worker Charlie Giordano said the camp involved lots of hands-on work and open learning. He gave the students a different challenge every day with the robot, so they could try something new.

“One day, they have to turn it into something that could knock things over,” he said. “Another day, they have to make a bridge and teach it to go over the bridge, so a lot of open-ended questions. There was a lot of problem-solving, also.” 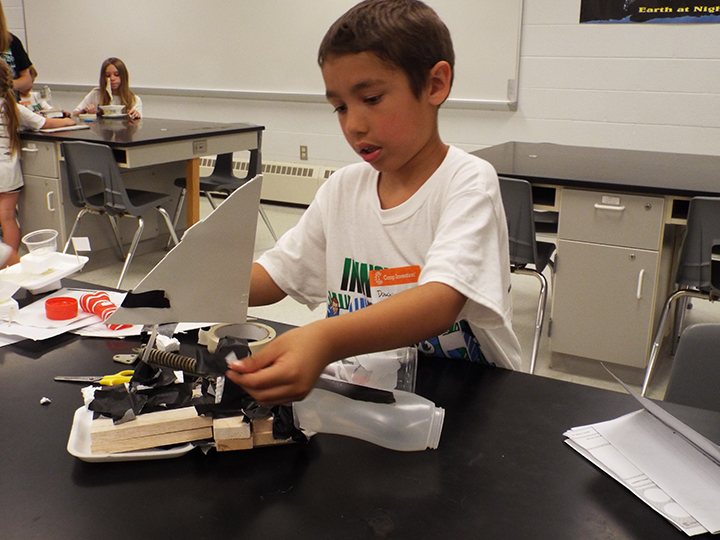 Charlie Giordano said that, throughout the week, the students grew with their learning. .

“This got them out of their comfort zone a little bit,” Charlie Giordano said. “The growth they’ve had from the beginning of the week to now is really cool to see.”

“They’re also getting the leadership experience for that and they’ll also get volunteer hours,” Brittany Giordano said.

Students build their boats at the Deep Sea Mystery station during the camp.

Camp worker Charlie Giordano, right, talks to students about the robots they built at the DIY Orbot station.

Fourth-grader Paul Whaley and seventh-grader Cole Herman build their robots on the first day of camp.

Camp worker Kady Gehrke, left, works with a student on their boat. 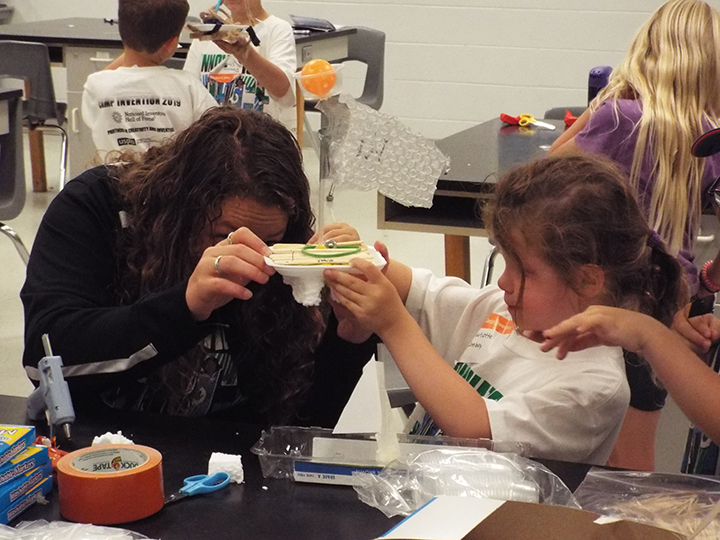 Camp worker Kady Gehrke, left, works with a student on their boat.