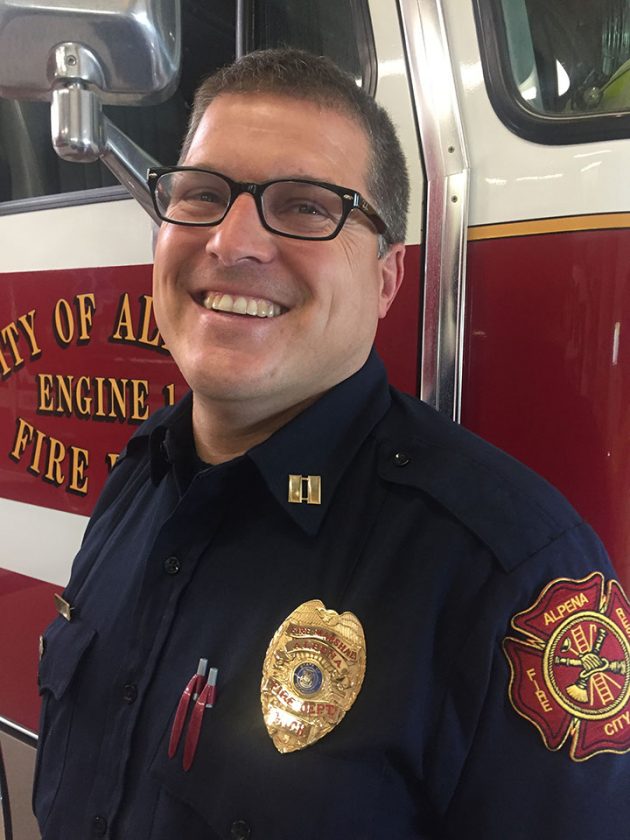 Marceau will bring a northern perspective to the board made up of representatives of schools, health care organizations, architects, engineers, and other public facilities, in addition to fire department personnel. The State Fire Safety Board helps develop fire safety rules for and ensure adequate inspection of public facilities throughout the state.

Marceau is honored by his appointment, made possible by the support of Alpena City Manager Greg Sunden and Fire Chief Bill Forbush.

Safety needs are different in northern Michigan than in other parts of the state, Marceau said, and deserve to be heard and addressed. From longer response times because of greater distances between homes to the lack of fire hydrants common in urban areas, issues in rural portions of the state should be recognized by those making safety decisions.

“To have a voice at the table, you need to have a seat at the table,” Marceau said, enthusiastic about the chance to be an advocate for the needs of the north.

Marceau was nominated for the position by former state representative Andy Neumann, who at one time worked with the Alpena Fire Department and also served as state fire marshal under former Gov. Jennifer Granholm.

Marceau remembers Neuman as the teacher of a public safety class when Marceau was in high school. Now the city’s public safety officer himself, Marceau is eager to begin work with the state task force at his first meeting on Sept. 19 in Lansing.

“I want to make the meetings,” he said. “I want my voice to be heard. If there’s something somebody wants or needs, I want to be able to put my heart and soul into ultimately making that change.”

The Joint Task Force on Jail and Pretrial Incarceration aims to expand alternatives to jail, safely reduce jail admissions and length of stay, better align state laws with constitutional principles, and provide support and services for crime victims, according to a press release from the county.

Peterson said it is costly to run a jail that is at or above capacity, and seeking alternative measures that reduce cost while maintaining public safety is a good conversation to have.

In Alpena, the county is working to build a new jail, supported by a tax increase approved by voters, in part because of a lack of bed space and difficulty being able to segregate inmates the way the state mandates.

“Jail growth is not just a problem for Detroit,” Peterson said. “We see it in Alpena and all across northern Michigan. It comes at a hefty price for rural taxpayers and calls for policy solutions that will work for all our counties.”