‘You want to learn to be a better person’ 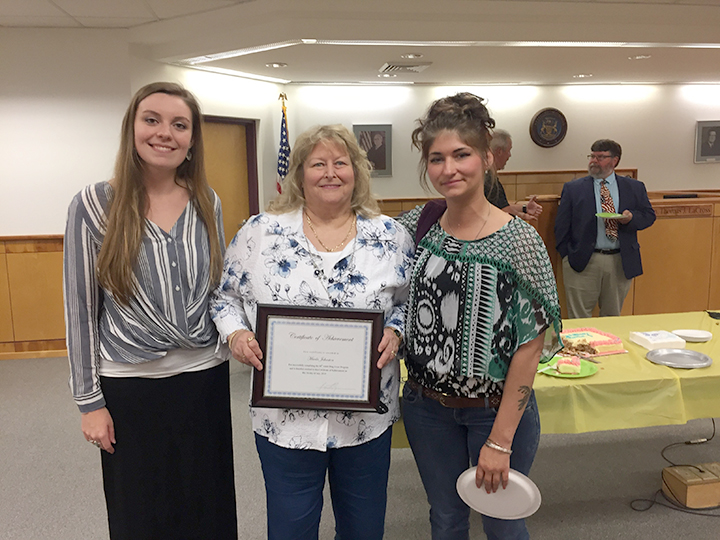 ALPENA–A standing ovation and a couple of “woo woos” marked a special occasion at this week’s drug court session at the 88th District Court in Alpena.

Marla Johnston, a drug court participant for the past two years, graduated from the program to the applause, hugs, and well-wishes of her counselors and fellow participants.

“Go, Marla!” called an enthusiastic voice from the courtroom gallery, where other participants looked on as Johnston received a certificate of achievement, a proud grin on her face.

“I love this program, but I’m ready to go on with my life,” Johnston told the group. “I’m ready to be the person I really am.”

‘WASN’T SUCH AN EASY BREEZE’

After 30 years as a bar owner, Johnston had developed a drinking habit that she took with her when she left the business behind.

Two years ago, a second arrest for being intoxicated while driving brought her to Alpena’s drug court, a problem-solving court with a focus on providing treatment and intense supervision to offenders as an alternative to incarceration.

At first, Johnston figured drug court would be a simple way to stay out of jail.

“It wasn’t such an easy breeze,” she recalled.

The weekly regimen of multiple group and individual counseling sessions, court appearances, Alcoholics Anonymous meetings, and drug testing, all mandated with no excuses accepted, is tough on participants.

So is the judge who oversees the proceedings, Thomas LaCross.

“He’s very stern. Very strict. But all he asks you for is to be honest with yourself,” Johnston said, sharing a story of LaCross’s exacting standards that hold participants accountable.

Johnston’s journey through drug court wasn’t a simple one. Three times, she encountered setbacks that landed her in jail and lengthened the time before she could graduate.

Even harder than the physical struggles of resisting alcohol and complying with the standards of the court, Johnston discovered, was learning to tell the truth, to the court and to herself.

“At first I thought, I’m too old. I don’t want to make changes,” Johnston said. “They can’t make me come here and do this and do that. But it’s not that they make you. You learn to want to. You want to learn to be a better person.”

‘IT FELT GOOD AND CLEAN’

Honesty is a hallmark of the program, one that is more important than even staying sober. Participants quickly learn that admitting to failures is crucial to being given the support needed to avoid making the same mistake again.

A 1,200-word essay on integrity assigned by LaCross was a turning point for Johnston, confronting her with the stark reality of who she had become and the real self left behind when she let alcohol control her decisions.

“I always wanted to stand still and just not really look to the future,” Johnston said. “Maybe I was afraid to move forward. But, once I decided to, it felt good. It felt good and clean. Like, OK, you know what? I think I got this.”

That honest self-evaluation was a breakthrough that led Johnston to being ready, as she said, to “be the real me.”

A carrot cake with cream cheese frosting disappeared quickly after the graduation ceremony, assailed by the forks of drug court supervisors and participants eager to help Johnston celebrate.

One by one, they wrapped the new grad in hugs and well-wishes, offering words of support and belief in her ability to stick with the profound life changes she’s achieved in two years of hard work.

The new graduate hugged back, offering encouragement of her own, from the perspective of one having made it out the other side.

“It’s a long haul, honey, but you’ll get there,” she told one of the other participants, with an affectionate pat on the back.

Of necessity, drug court participants achieve a deep level of intimacy with each other, sharing heartfelt struggles and temptations as they wrestle with very real challenges. In their frequent interactions in group therapy, court sessions and AA meetings, participants become a family, one that is hard to leave behind when graduation time comes.

Johnston plans to attend drug court once in awhile to continue to offer support to the people who have supported her. She has toyed with the idea of someday becoming a recovery coach.

Strengthened by lessons hard-won and relationships forged in drug court, Johnston is hopeful about the future and her ability to continue to make healthy decisions.

The life of being controlled by a substance is no longer for her, Johnston said.

“I pray every day that I won’t go back there,” she said. “I think I’m one of those that’s going to succeed.”