Summer at the club 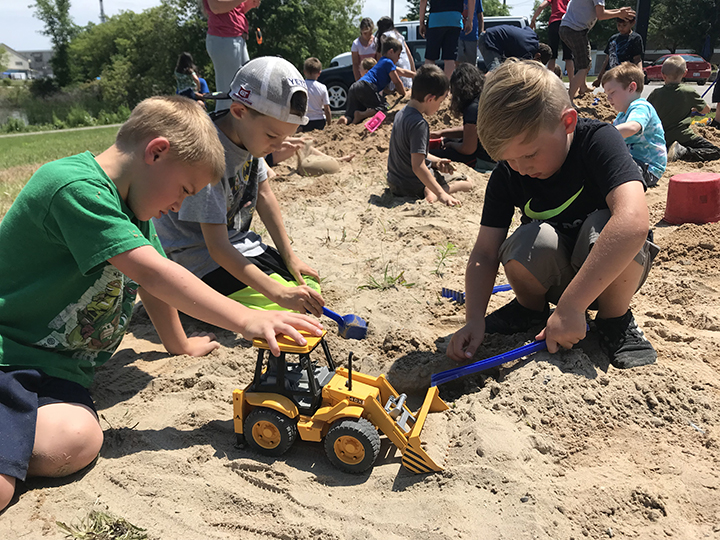 News Photo by Julie Goldberg From left to right, Landon Orban, Indiana Stutzman, and Ethan Hackney play in the sand at the Boys & Girls Club of Alpena on Wednesday.

ALPENA — Kids at the Boys & Girls Club of Alpena have been busy this summer participating in different activities and spending time with their friends.

Some activities the kids participate in are basketball, whiffle ball, wall ball, and soccer. They also get to go outside and play in the sand or different games.

She said she comes every day knowing there’s always something new to do or something that the kids haven’t done in a while. Her favorite activity is whiffle ball because it’s really fun and everyone gets a chance to play.

“We don’t really keep score,” she said. “If we do, it doesn’t really matter, because we all get to play and it’s really fun.”

Sixth-grader Maddison Martin said the kids have been playing baseball. They participate in a home-run derby. She said they also have a pitching competition once in a while.

Sixth-grader Emerson Watts said he’s been going to the club as part of the Youth Volunteer Corps for a couple of weeks. He said he’s been playing most of the games in the gym.

He said his favorite activities are pool or scatterball. Scatterball is similar to dodgeball, but Watts said you can only take three steps if you have the ball.

Going to the club in the summer is fun for the kids because they know their friends are there, Lacy Martin said.

Watts said he has friends from school and friends at the club, so he gets to see everyone he knows all the time.

Lacy Martin said going to the club is fun because it’s better than sitting at home playing video games or watching TV. She said they’re all doing something active at the club with their friends.

“Coming here is different, because you get to see a lot of new people and you’re not on a TV all the time,” Lacy Martin said.