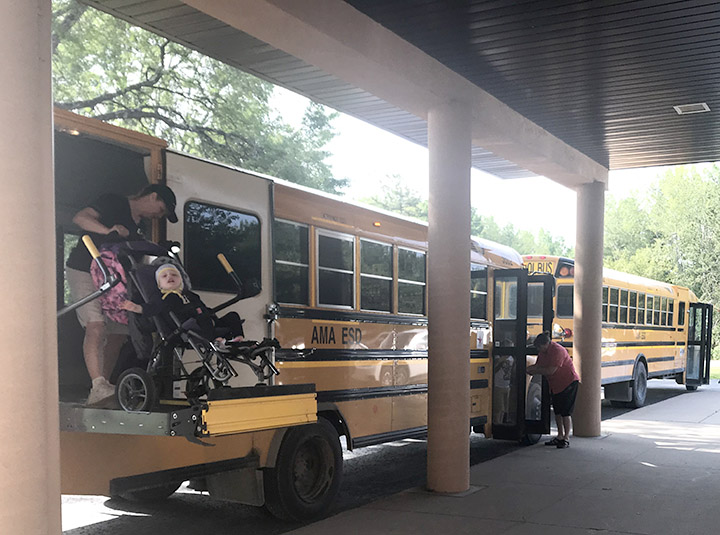 News Photo by Julie Goldberg Pied Piper School students get off a Dean Transportation bus Tuesday before a day at the school’s summer program.

ALPENA — The first year of a contract between the Alpena-Montmorency-Alcona Educational Service District and Dean Transportation was a success, officials say.

After Bartz’ crimes were discovered, ESD officials said TBTA failed to follow many of the protocols put in place meant to improve student safety, such as routinely reviewing video of bus trips.

But those protocols are being followed by Dean, the ESD superintendent said.

“There can be some bumps along the way, and in that transition, there were some growth opportunities for us and Dean Transportation, but they were able to, really, in a short period of time, get up to full operations so that we were ready for the first days of school last year,” Superintendent Scott Reynolds said.

The ESD’s contract with Dean Transportation, a Lansing-based company that provides busing to school districts around the state, is good through June 30, 2023.

The contract is expected to cost the ESD about $153,804 a year after a 70% reimbursement from the Michigan Department of Education, a 7.5% reimbursement from Medicaid for students who are eligible, and a reimbursement for services provided to Alpena Public Schools, which also uses Dean Transportation for special education busing.

The ESD paid TBTA $93,000 its last year in 2017-18, so costs went up for the district. Reynolds said the extra money is worth it because Dean Transportation’s staff is better-trained than TBTA’s was.

District officials said last year that TBTA did not meet expectations that were set the last year of the contract. At the time, TBTA officials told The News they did meet the district’s expectations.

TBTA General Manager Andrew Sundin did not respond to messages seeking comment on this story.

The last straw seems to have been an incident in January 2018 when a student’s equipment on a TBTA bus lost power, leaving the student without oxygen support for about 30 minutes.

In May, families of Bartz’s victims settled a lawsuit that had been filed against TBTA and Prell’s Services, the TBTA contractor that hired Bartz.

The settlement amount hasn’t been made public. TBTA has yet to respond to a Freedom of Information Act request seeking information about how much it paid in the settlement.

As part of its contract with the ESD, Dean Transportation completes random monthly audits of each bus run. The contract requires 10% of each run to be sampled for the day by reviewing surveillance video.

Documentation was logged and available for the ESD or APS. Each district has access to view surveillance tapes for students upon request.

Patrick Dean, vice president of business development for Dean Transportation, said videos were checked regularly and randomly. The bus company uses a randomized program that chooses runs and routes to review on a weekly basis. Video is then uploaded to the company’s cloud-based system and viewed by a trained school transportation manager, he said.

During the 2018-19 school year, 42 routes and 85 runs were reviewed, meaning officials reviewed 227.5 hours of video during the school year.

That’s in contrast to TBTA, whom Reynolds said repeatedly failed to produce logs showing videos had been watched.

CHANGES DURING THE SCHOOL YEAR

The first year of the contract brought changes that positively impacted the ESD and Dean Transportation partnership, officials said.

Pied Piper School had a radio installed at the school that could access the Dean Transportation system. That radio provides redundancy to Pied Piper, Reynolds said, in case the contractor’s central office crashes.

“It was never a discussion of why it wouldn’t work, it was what have we got to do to make this happen, and very collaborative,” Reynolds said.

Dean, the bus company vice president, said having two-way radio communication is common in school transportation because it provides instant connection between the schools, transportation centers, and the buses. The radios don’t need WiFi or cell phone connection, he said.

“We don’t generally use it, but, if there were an emergency and we were unable to get a hold of someone at dispatch, we were able to use the radio,” Wentz said.

Throughout the school year, the contractor and the ESD were in constant communication. Dean said regular meetings were conducted and all aspects of transportation were discussed.

“These regular meetings included our statewide, regional, and local teams, along with leaders from AMA ESD and APS,” he said. “Our staff was in constant communication with ESD staff on a daily basis and onsite at programs throughout the school year.”

The first year of the partnership presented a need for some changes for upcoming years.

The buses will have a new feature: a camera on the bus swing arm, which swings out a stop sign when the bus is picking up or dropping off students. There were moments during the 2018-19 school year when vehicles illegally drove past buses that were picking up students.

Reynolds said it’s difficult to prove a vehicle didn’t stop when there is no video evidence, so the stop signs will have cameras installed on them. Reynolds said that adds an extra element of safety for students and families.

“It’s a minimal cost and the payout is huge if it’s going to help enforce safety measures for our students,” he said.

Each camera will cost $2,268, an expense that’s also eligible for the 70% reimbursement from the state, Reynolds said. He said the nine buses in operation will have the cameras and the cost will be divided between the ESD and Alpena Public Schools based on ridership.

Dean said the images snapped by the cameras will be given to law enforcement, along with documentation of the bus driver or bus aide’s visual observation.

“By installing cameras, Dean and AMA ESD can utilize technology to increase enforcement and awareness of illegal bus passing,” he said.

He said the Dean Transportation bus drivers and bus aides want to get to know their students and the bus routes before each school year.

“We just thought it was something they would do the first year, because they were new, but they said, ‘No, we do this every year,'” Reynolds said.