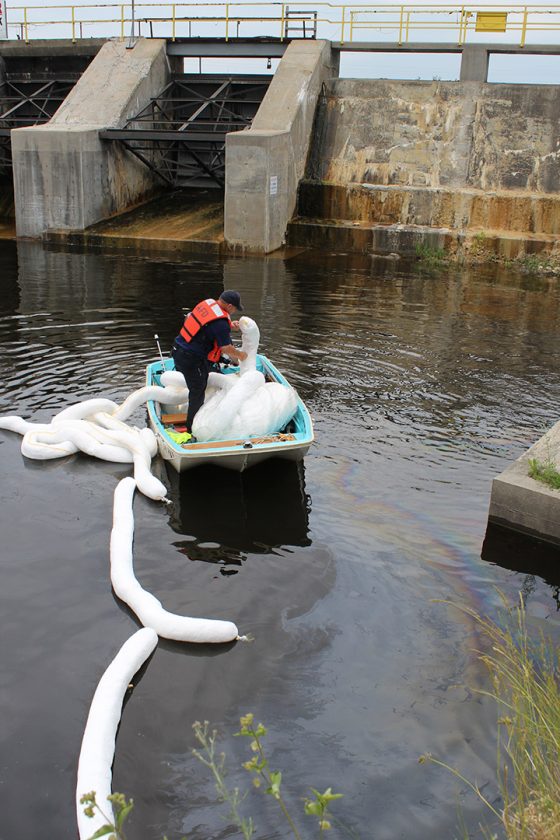 News Photo by Steve Schulwitz Alpena Firefighters use a boom to contain a small gasoline spill in the Thunder Bay River on Wednesday. The source of the spill is believed to be a catch basin nearby, where officials believe somebody illegally dumped gas. The Michigan Department of Environment, Great Lakes, and Energy and the U.S. Coast Guard were notified of the spill and the Coast Guard will determine what steps, if any, will be needed to address the situation.

ALPENA — A call from a concerned resident about a possible oil leak into the Thunder Bay River on Wednesday led to a hurried search for the cause of the discharge and cleanup of the contaminant.

The chemical, which was found to be gasoline, was flowing out of a storm drain near the 9th Avenue dam. Officials believe it came from a catch basin in the parking lot of the Alpena Area Credit Union on Miller Street, where officials think someone illegally dumped gas into the catch basin, which flows to the river.

The spill was reported to the national reporting center, Michigan Department of Environment, Great Lakes, and Energy, and the U.S. Coast Guard. The Coast Guard will determine next steps, if there is any other action required at all.

The emergency call came into central dispatch around 9:30 a.m. and prompted a quick response of Alpena fire trucks and ambulances, as well as crews from the city Department of Public Works, Alpena utility management company Suez, and Alpena County Emergency Coordinator Mark Hall.

Units searched feverishly upstream and downstream to find the plume, which was eventually located near the storm drain at the foot of the dam. After more searching, the source of the discharge was found.

The fire department’s boat was launched and boom netting was installed to contain and absorb the oil.

Alpena Fire Marshal and Deputy Chief Bob Adrian said the city gets call periodically about leaks and they are handled with the highest degree of response.

“We take them all seriously and respond accordingly,” Adrian said. “If there is a spill or any other environmental threat, we do our best to contain it to protect the public and the environment.”

Adrian said he believes the boom that is in place to contain and capture the gas could be the only remedy needed, because the spill was small. He said it is best, however, to let DEGLE and the Coast Guard investigate the seriousness of the matter and draw up plans from there.

“It doesn’t take much to create a sheen on the water, and it only takes a little gas or oil to make it look like a large plume,” he said. “We will have follow-ups with the state and Coast Guard to see if more attention to it is needed, or if it is something the environment will take care of on its own.”