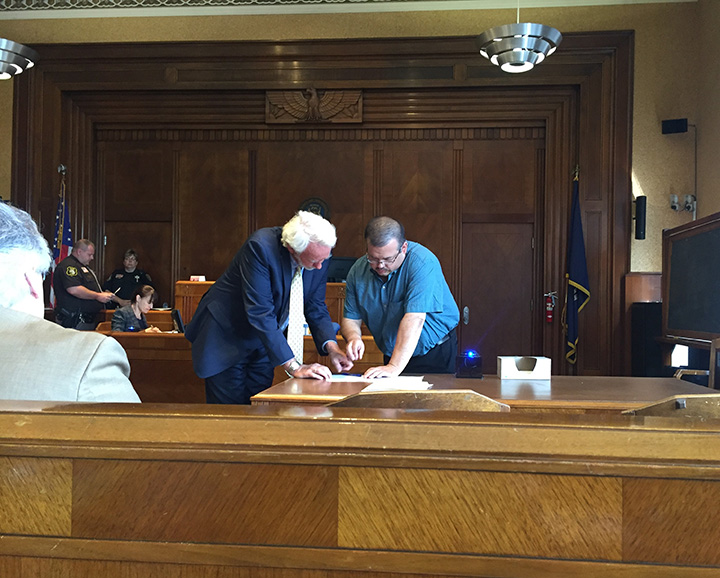 ALPENA — “You betrayed our trust,” a former county fair queen told Bradley Avery as the former Alpena County Fair Board member was sentenced in the 26th Circuit Court on Monday.

Avery, who was arrested shortly after the 2018 Alpena County Fair, was sentenced to a year’s probation and six months in jail for stealing money from the Alpena Agricultural Society while he was the Fair Board treasurer.

A contingent of fair board members and Future Farmers of America representatives was present to witness the sentencing for Avery, who pleaded guilty in May to misappropriating funds for personal use from the Alpena Agricultural Society and illegally moving FFA funds in the summer of 2018, when he was county fair treasurer.

Defense attorney Dan White, in a statement to the court, said Avery has cooperated with the courts and found full-time employment after losing his job because of the criminal charges against him. Because of his role as caretaker for several family members, a lot of people depend on Avery, White said, a fact he asked the judge to consider when determining whether to put the defendant behind bars.

Avery himself, apologizing to the court and those present, admitted there is no excuse for his actions.

In letters read to the court, two past county fair pageant contestants shared memories of Avery offering encouragement and support as a 4-H leader and mentor who betrayed their trust. The 2015 fair queen, Courtney Krentz, recounted looking up to Avery for advice and guidance before she learned of his illegal activities, urging him to own up to the hurt he has caused her and the community.

Taylor Alexander, part of the 2018 queen’s court, said she defended Avery as a trusted friend when he was first accused.

“I used to argue with them and tell them they were wrong and he really was a good person,” Alexander wrote. “But does a truly good person lie and steal and betray others like this?”

Fair Board President Jacob Bowen said in a letter that Avery’s “repulsive” actions not only betrayed the trust of the board but also hurt the event for which they existed. The board has lost several knowledgeable members, has struggled to find sponsorships for the fair, and has had to work to repair its credibility in the community because of the incident, Bowen wrote.

Avery has made restitution of the $16,643 agreed upon in his plea arrangement — an amount, Alpena County Prosecutor Ed Black said, that doesn’t necessarily reflect the total taken from the Agricultural Society. Pressing for jail time for Avery, Black told the court that “there needs to be a message sent that you can’t just take from a nonprofit society, or frankly from anything, and just get away with it.”

Avery’s six-month jail sentence was set to begin at 6:30 p.m. Monday. Judge Michael Mack will rule shortly on a request by White regarding the possibility of work release, which would require Avery’s being lodged in the Montmorency County Jail.