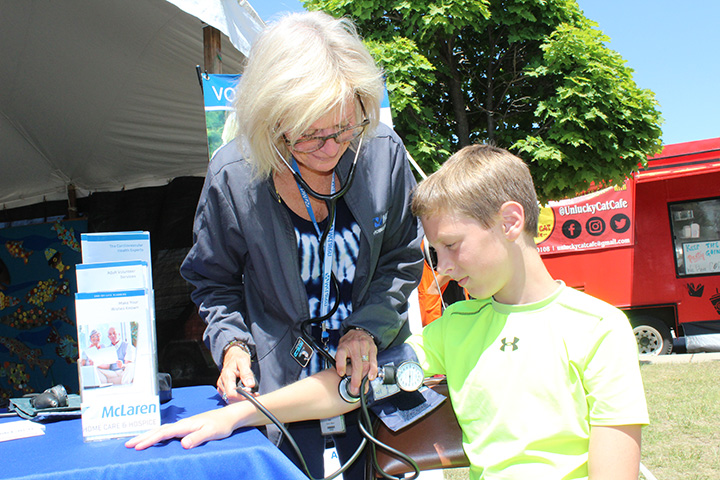 News Photo by Steve Schulwitz McLaren Northern Michigan home care and hospice nurse Barbara Rigg, left, checks the blood pressure of Calvin Cordes at a health fair hosted by McLaren Monday at the Michigan Brown Trout Festival. Rigg said educating people on high blood pressure and cholesterol can help them take action now and prevent more serious health matters down the road. This was the first year the event was held during the festival.

ALPENA — Educating the public on the dangers of high blood pressure and cholesterol, as well as the importance of maintaining a healthy diet and exercising, can help people to avoid more serious and long-term health issues, officials said.

Nurse Barbara Rigg led the event, which offered free health care screenings for people at the harbor and literature on services that are offered. She said being able to host an event at places such as the festival is important. The event was in the Wolverine State Credit Union Learning Center Tent and Rigg said many of the people she had screened were children.

“Being attached to the Learning Center, we are able to check blood pressures on little ones and maybe get them a little more acquainted with the process so when they go to the doctor, it won’t be such a scary thing,” Rigg said. “This is the first year we are doing this here, but I think the more we can get out to places where there are activities and fun things, the more likely we may be able to detect some problems and advise them.”

Rigg said that, like much of the nation, high blood pressure and obesity are prevalent in Northeast Michigan. She said those two conditions go hand-in-hand with diabetes and heart disease. She said opening people’s eyes to the risks of those conditions and getting them to monitor their health can help them live a healthier life.

“We all need to be aware of what our numbers are and take ownership of your health,”she said.

When an issue is diagnosed, Rigg said there are many treatments and medications to help treat most sicknesses, but most people don’t know they’re available.

“There are so many new interventions now, but you have to be willing to reach out for them or know that they are there,” Rigg said. “I’ve been a nurse for 44 years, and the technology has changed tremendously and there are a lot more solutions to these problems than what there were.”

Rigg said she believes public health education initiatives are working, as she has observed more people who seem to be eating healthy and engaging in recreational exercises such as bike-riding and running.

She said there are few excuses as to why someone wouldn’t make an effort to get into better shape.

“Walking is accessable for almost anybody,” she said. “You don’t have to go to a health club to excersise.”