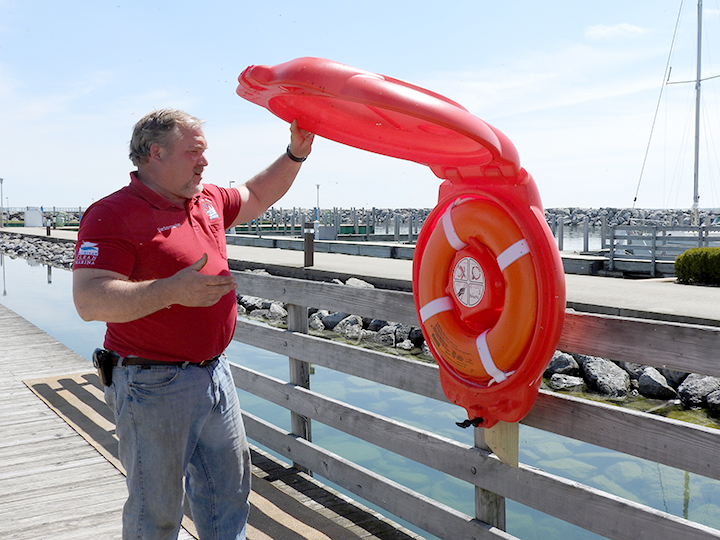 Photo by Crystal Nelson Wayne Saile, harbormaster of the Rogers City Marina, adjusts life rings the city was able to purchase with the help of a grant through the Northeast Michigan Community Foundation. The life rings are a new addition to the city’s harbor this summer.

ALPENA –Harbormasters in Northeast Michigan are gearing up for the recreational boating season, working hard to fill their harbors not only with boats owned by area residents, but also with vacation boaters traveling up and down the Great Lakes.

Don Gilmet, Alpena’s harbormaster and building official, said the city’s location in Thunder Bay means boaters have to travel about 10 miles in from Lake Huron to utilize the harbor’s services. However, he says boaters who travel into the harbor do so because Alpena is a destination, with attractions like the Thunder Bay National Marine Sancturary and diving on shipwrecks drawing boaters to the area.

“The marina brings new people to the area via the water,” he said. “It allows for festivals, such as the (Michigan) Brown Trout Festival, every year, which pump money into the local economy. The visiting boaters also spend money as they visit downtown.”

Over the past 10 to 12 years, however, Gilmet said, it’s been difficult for harbors in the region to break even, given the fact that the region’s fishery has changed.

Northeast Michigan was once teeming with anglers coming to fish the lake’s robust chinook salmon fishery, but the volume of recreational boaters has decreased with the collapse of that fishery more than a decade ago.

Gilmet said expenses have also become more burdensome as the costs of maintaining a harbor –such as water bills, labor costs, material costs, and fuel — continue to increase, even as revenue dips from fewer fishing boats coming into port.

The city’s marina is unique because it’s owned by the city but operated by Thunder Bay Shores Marine, a private company that pays an annual fee of $25,000 to the city, along with a $3,900 fee to rent equipment, such as a hoist.

The city, however, is responsible for the marina’s upkeep. Repairing ice damage that occurred over the winter has already cost $15,000 and caused a slight delay in the harbor’s ability to fuel boats early this season, and there’s more work to do: A backflow preventer on one of the water lines cost $2,000 to replace, and there are still docks that need attention because of the ice damage from the winter and unusually high water in the Great Lakes right now.

Nonetheless, Gilmet still believes Alpena has the most successful harbor in the region, and he attributes most of that success to the boat hoist the city’s Municipal Council had the foresight to purchase. The hoist is open-ended, able to take a boat weighing up to 700,000 pounds — or 350 tons — out of the water either for repairs or winterization.

The city has been able to secure a number of grants to fund key pieces of equipment to expand services available to boaters traveling on Lake Huron.

In 2016 and 2017, for example, the city purchased a sling-lift trailer and a refurbished payloader to tow it with $60,000 in grant money from the Michigan Department of Natural Resources Waterways fund and another $60,000 grant from the U.S. Department of Agriculture’s Rural Development fund.

The sling-load trailer can take a boat up to 45 feet long and weighing up to 20,000 pounds — or 10 tons — out of the water for repairs or winterization. Saile said the city utilized the trailer last year during a Port Huron-to-Mackinac race, when a boater lost a propeller. Crews were able to pull the boat out of the water, install a new propeller, and get the boater back into action that day.

“It was important to me that we move forward and not just stay stagnant,” Saile said. “It was big deal to me, getting that trailer and that loader here.”

The city was also able to offer winterization of boats for the first time this past winter and added 12 life ring floatation devices, with 100 feet of rope, to the dock through a grant from the Northeast Michigan Community Foundation. This year, the city is in the process of constructing a gin pole, used for raising and lowering sailboat masts and lifting engines off of boats, with the goal of installing it at the marina this summer.

In addition to the improvements in the harbor, Saile is also encouraged that Atlantic salmon seem to be making a comeback.

With the fishery returning, Saile said there is a need for charter fishing boats to return to the harbor, as well.

“If you’re a charter boat captain reading this article, this is the marina you should be checking out,” he said.

Harrisville has had its fair share of struggles keeping its marina afloat.

Unlike other marinas in the area, Harrisville’s marina is owned by the city but operated independently by a Harbor Advisory Commission comprised of Harbormaster Jim Ferguson, Harrisville City Council members, and members of the community appointed by council.

Ferguson, who became harbormaster in 2016, said the city still keeps $5,000 availalbe for the commission to borrow if unexpected expenses come up. Ferguson said the marina is required to repay those expenses. He said 2017 was the first year in recent memory the marina did not have to borrow money from the city to make ends meet.

Harrisville’s harbor is is in the middle of a $2.5 milliion rennovation, funded by a DNR grant. Ferguson said there hadn’t been any work done to the docks since the 1980s. The renovation is currently a year ahead of schedule, he said.

“This year, we are concentrating on the fuel dock — a new fuel shack, a new building,” he said.

In addition to the rennovation, Ferguson said he has used his background in computers to boost the harbor’s online presence.

“I think we’ve really exploited social media, and the harbor has a new website and we’ve been able to take advantage of that,” he said. “I think that getting the word out that we’re here is a biggie, and I think we’ve done really well with that.”

A look at efforts to bring Atlantic salmon stocking to Northeast Michigan.