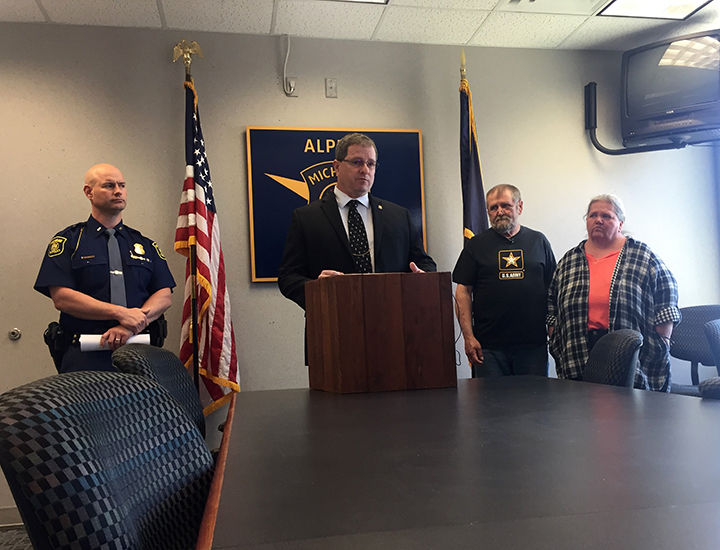 ALPENA–It’s been seven years since her parents heard Lisa’s voice.

“She had some troubles, but Lisa was just a happy person,” Marc Knight, Lisa’s father, said. “She just loved life. She loved her horses, she dearly loved her children. That’s why none of this really makes sense.”

Seven years after the unexplained disappearance of Ossineke resident Lisa Knight, the Michigan State Police announced in a press conference Thursday that the investigation into her disappearance has not been closed, nor will it be until evidence is found that leads to closure for her family.

The case, which has mystified law enforcement and the community, began in 2012, when the 29-year-old Knight, of Ossineke, went missing, her last known communication a phone call made from her ex-husband’s home on June 8. Four days later, with no sign of Knight, a close friend reported her missing to police.

Initially treated as a missing person incident, the case is now being investigated as a homicide, according to Det. Sgt. Stephen Harshberger of the MSP-Alpena Post, lead detective on the case since 2012.

“After seven years of Lisa not contacting her family, her children, of us not being able to find some shred of evidence indicating that she is alive, we firmly believe at this point that she is deceased,” Harshberger said at a press conference Thursday at the Alpena Post.

Police treatment of any type of death investigation as something other than a homicide does disservice to that case, Harshberger said.

“If we just assume that it was an accident, natural causes, then we’re not out putting in the due diligence that we should be,” he said.

Over the seven years since Knight’s disappearance, MSP detectives and troopers have received and followed up on nearly 150 tips from the Alpena area and beyond, from as far away as Europe. At least one arrest has been made that, it was thought, might have a connection to Knight’s case, but police found no evidence establishing that connection.

Lloyd Frey, Knight’s ex-husband, is considered a person of interest, Harshberger said, but he has cooperated with police. Extensive searches with cadaver dogs were conducted on his property, including boring into and probing under a section of cement that was laid by Frey around the time of Knight’s disappearance, with no evidence of the woman’s remains detected.

Police are still pursuing some credible leads, the details of which are not able to be released at this time. It will remain an open case, Harshberger said, until evidence can be presented to a prosecutor, it is proven that Knight died without foul play, or she turns up alive.

Knight’s parents, Marc and Jean Knight, also spoke at the press conference on Thursday, making a plea to the community to come forward with information, any information at all, about their daughter.

“I know there’s people that, they have information, even if they don’t know specifically, they weren’t there that night, but they have information, they suspect things,” Marc Knight said with emotion. “In my mind, there’s no rational reason for not coming forward to help somebody find their daughter and their mother.”

Lisa Knight’s children, now ranging in age from 8 to 20, have adjusted to life without their mother, but they miss her, especially the two oldest, who remember her best.

“Please, please come forward,” Jean Knight pleaded. “These kids … they need to have this closure. They need to be able to move on past this. And they can’t. They can’t until they know.”

Members of the community may be hesitant to share information, thinking it isn’t significant enough to be of value.

“Let us make that decision,” Harshberger said. “Sometimes, it’s nothing. You haven’t wasted our time at all. Sometimes, it’s huge, and they don’t even know it.”

The press conference was called to ask for the community’s help, and to remind them that one of their own is missing and needs to be found.

“Sometimes, the community can forget. And we don’t want that to happen,” said Lt. Travis House, MSP 7th District public information officer. “We want this to be an open sore, for people to remember that there’s someone out there that’s missing, and that their family would very much like some closure on the case.”

A $1,000 reward is offered for information leading to the resolution of Knight’s disappearance.

Anyone with information is encouraged to contact the MSP-Alpena Post at 989-354-4101. Calling MSP does not negate the Crime Stoppers reward. Those uncomfortable speaking to police may also call Crime Stoppers at 1-800-422-5245.