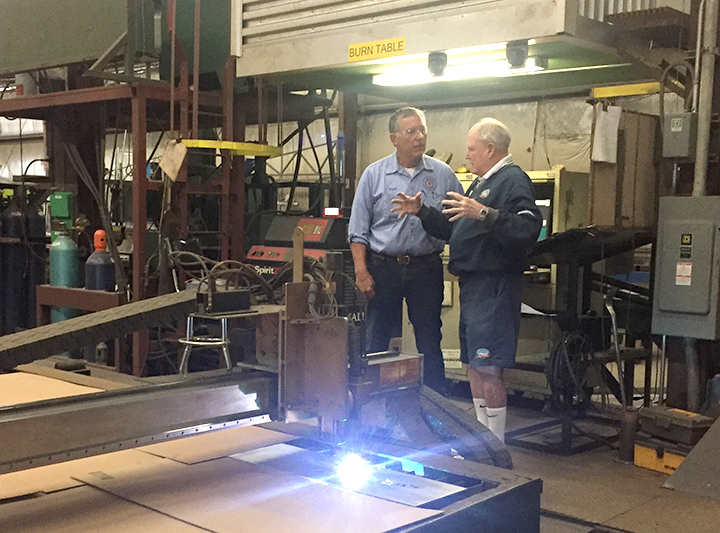 News Photo by Julie Riddle Tom Moran, CEO and founder of Moran Iron Works, and Bill Shepler, CEO of Shepler’s Mackinac Island Ferry, supervise the cutting of the first piece of metal for a new ferry to be built as part of a partnership between the two companies.

ONAWAY — A small blaze of hot light and the sharp smell of a torch marked the the beginning of a project and a continuation of a relationship that will continue to put food on the plates of Northeast Michigan families.

“Built in Michigan, by Michigan, for Michigan,” said Bill Shepler proudly at a news conference Monday, as the first piece of metal was cut for a new ferry that Moran Iron Works in Onaway will build for Shepler’s Mackinac Island Ferry.

Shepler, CEO of the ferry company that is his namesake, and Tom Moran, CEO and founder of Moran Iron Works, announced the project Monday at Moran’s fabrication center, where the ferry will be constructed this summer.

Moran praised Shepler for his part in providing jobs for 40 Onaway-area families and keeping the project’s substantial dollars local.

“This about the Shepler’s family creating value, investing in Northeast Michigan, and making it work for all of us,” Moran said.

The $4 million project, requiring 13,000 hours of labor, is scheduled to wrap up in late November, when the ferry will be sent to Mackinaw City for final preparations before it makes its inaugural run at the beginning of the 2020 tourist season.

The local relationship, Shepler said, is one that he prizes, and he is glad to make a financial contribution to the region by keeping the work local.

“We’re proud as punch that we’re going to do this in Michigan, and that Tom Moran’s going to do it,” Shepler said.

Other vessels have come from Wisconsin, the Atlantic seaboard, or the Gulf Coast, shipped up the Mississippi River to reach the northern coast of Michigan.

Moran Iron Works’ decades-long relationship with Shepler’s, much of it spent repairing and providing modifications for the company’s ferries to Mackinac Island, will grow even stronger with the latest build, Moran said, and will bolster Northeast Michigan’s economy.

“Anything that Tom does keeps jobs and keeps us secure. He does such a great job of keeping business rolling,” affirmed Kamron Oberlin, president of the Onway Community Chamber of Commerce, who knows many of the Onaway locals who are employed at Moran Iron Works.

Though Oberlin at first wondered if the ferry-building business would be a stretch for the company, after Moran’s successful relationship with Shepler’s, it “seems like it’s a good industry for him to jump into, and it’s exciting to see where it’s going to go.”

The ferry, the second that Moran has built for Shepler, will be constructed over the summer. Passersby may catch a glimpse of the boat’s progress when the facility’s giant folding doors are open during the warm summer months.

The new, 210-passenger ferry will sport a four-engine jet drive propulsion system made for high-speed ferries in place of the traditional propeller, sending the boat smoothly through the water at a top speed of 34 miles per hour. The jet drives, from a New Zealand company, will be the first of their kind on the Great Lakes.

Touted by Moran as one of the more sophisticated ferries on the Great Lakes, the new vessel will feature climate control in the cabins to allow for greater passenger comfort and less queasiness. There will be plenty of room for luggage and bikes, important for travellers headed to the vehicle-free island.

Unlike shipyards in other parts of the country and world, Tom Moran said, his company will build the ferry in its entirety — transporting it, when finished, along a high-wire transport corridor to Rogers City, where it will put in at the Port of Calcite.

“Let’s get this party started, and we hope to have a new boat for you all on May 1 of 2020,” said Chris Shepler, president of the ferry company, before Bill Shepler pressed a large button to start the cut into the new ferry’s first piece of metal, a cutout plaque bearing the name “Shepler’s.”

Moran Iron Works built a research vessel for the U.S. Fish and Wildlife Service in 2017 and is putting the finishing touches on a kayak-launching vessel as part of a contract with Pictured Rocks National Lakeshore on Lake Superior.