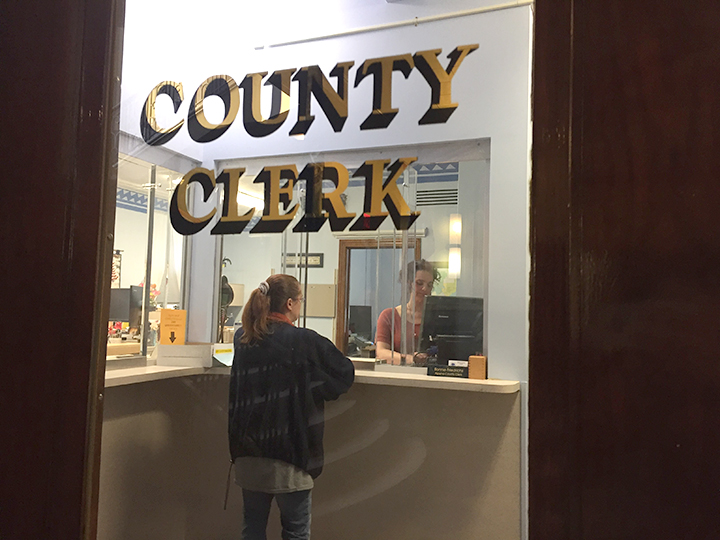 News Photo by Julie Riddle An Alpena resident pays a court fee for an acquaintance at the County Clerk’s Office in Alpena recently.

ALPENA — Change is coming to court. It’s only a question of what the change will be.

Right now, courts are funded through a mix of state and local taxpayer money and the bank accounts of people who have been found guilty of committing crimes. While courts are, in theory, a branch of state government, they have been, in practice, mostly managed locally by counties and municipalities.

A proposed set of changes, if approved by state legislators, would mean a redirecting of all court income — roughly $580,000 per year from the courts representing Alpena County — to a central, state-owned pot.

Counties and other local governments running courts would be expected to continue paying any money raised through local taxes for courts.

The creation of a state-run court system, with finances handled at the state level and court employees working for the state rather than the county, has been discussed for decades in Michigan.

Now, with the advent of several cases challenging the current system before the state Supreme Court on the grounds that a conflict exists when courts fund their operations on the backs of defendants, it looks like that transition may finally take place.

That has local courts wondering what’s in store.

The Supreme Court has ordered a new court funding structure to be in place by October 2020. The Legislature created the Trial Court Funding Commission, which in April released an interim report, suggesting several measures to fix what it calls “a broken system.”

The current system of funding, the commission said, tempts judges to support their county financially through unfair sentencing — although Meghann Keit, government affairs associate with the Michigan Association of Counties, says the commission has not seen such incidences among judges in Michigan.

To fix the perceived flaw, the commission recommends assessing all defendants in all parts of the state the same fees and fines, with some discretion available to judges.

In addition, the commission declares the creation of a state-owned Trial Court Fund a “must.” All court-related payments — the fines, fees, and court costs currently split between the local courts, the state, and other entities — should be channeled into one centralized fund managed by the state, the commission says.

From that fund, counties would be reimbursed based on caseload and the types of cases handled in each court.

Alpena County, which sees fewer cases than larger counties and deals more with lower-level crime, would, presumably, receive less funding from the Trial Court Fund than counties downstate. The commission concedes the risk, saying reimbursement decisions made by the state “could result in a smaller number of staff than is needed to efficiently operate an office and serve the public.”

Diverting funding away from local courts burdens smaller, more stable counties like Alpena, according to Judge Thomas LaCross of the 88th District Court in Alpena.

“We’re given less money and the same task,” he said. “We have to manage money better. And thus, we do. I don’t want to have that great effort diluted with the metropolitan areas that don’t do as good a job.”

Money in the Trial Court Fund would be used only for court-related expenses, meaning local funds and organizations accustomed to receiving a percentage of court dollars would have to adjust their budgets.

The Michigan State Police, for example, received $25.5 million from courts in 2018, according to Lt. Travis House, 7th District public information officer with MSP.

That funding supports MSP troopers, such as those at the Alpena Post, and also flows to local law enforcement agencies like the Alpena Police Department.

No plan is in place to react if that funding is removed, according to House, but it would cause the agency to “do some serious talking about how to fill substantial budget gaps.”

Since the first Michigan Constitution was written in 1835, all fines collected by state courts have been funneled to support libraries, a reflection of the state’s desire to separate the decisions of courts from the revenue they create.

Because the “one pot” system of giving all court money to the state would accomplish the same goal, the redirection of money to libraries would no longer be required, according to the Trial Court Funding Commission.

Over the past 10 years, the Alpena County George N. Fletcher Library has received $115,000 to $130,000 a year from local court fines, the second-largest source of revenue behind the library’s property tax, according to Director Eric Magness-Eubank.

The issue of court fines funding libraries has been an item of contention many times in the past. Each time, Magness-Eubank said, the idea of rerouting fine money has been shot down because “legislators quickly discover that libraries are more popular than they are.”

Currently, only judges are employed by the state, with most of their benefits paid by counties. The report suggests a reclassification of many court positions as state employees. The rationale, according to Keit, of the Michigan Association of Counties, is to increase efficiency and reduce costs by reducing paperwork.

County clerks’ offices are anxious to learn more about what that would mean for their work, according to Ann Marie Main, Presque Isle County clerk. A shift to some staffers being state employees with potentially different job descriptions could radically change the who-does-what routine in her small office, she said.

Few answers are available because county and court clerks, who handle much of the paperwork and financial matters that would be affected by the changes, have not been included in the decision-making, Main said.

“We haven’t been invited to the table,” Main said. “There are too many unknowns for such a large endeavor.”

The Alpena District Court office, too, is uncertain what to expect in the next few years, according to Mary Muszynski, court administrator and magistrate for the 88th District Court in Alpena.

Some 35 years ago, Muszynski remembered, a few courts downstate did a trial run of being state-operated and -funded.

“I believe it didn’t work out very well,” Muszynski said.

Potential complications raised by the commission’s proposed solutions would add to the workload of individuals at the county level who would need to make the hands-on adjustments to the changes.

“We function pretty well with what we do right now,” Muszynski said.

‘POOR USE OF JUDICIAL TIME’

While some proposed changes are worrisome to local courts, other aspects are a definite positive.

The potential for state help with technology implementation and funding, for example, is exciting to Muszynski, who would welcome the change to cloud-based document filing to streamline her office’s communication with the state.

The report’s stated goals of removing the burden of financial management from courts is welcome, as well, Muszynski said.

While fines, fees, and court costs are assessed with most sentences, there is no guarantee they’ll actually be paid. In Presque Isle County, for example, the 89th District Court recorded over $62,700 in unpaid court costs, fees and fines for 2018.

Chasing down unpaid court orders is “a poor use of judicial time and court resources,” according to the Trial Court Funding Commission.

If funds are all funneled to a state pot, collections would still be handled by the people who work in district and county clerks’ offices, Keit said, but with the intent that “getting the courts out of the collection business” would free up court personnel to provide more critical court functions.

Substantial changes to local court funding would need to be implemented gradually to be manageable at the county level, Muszynski said.

The commission agrees, as evidenced by cautions spread throughout the report: “Success will depend on thoughtful planning and a phased implementation over a period of years.”

As the state figures out what steps ought to be taken to most fairly fund its courts, counties wait, hoping for the best.