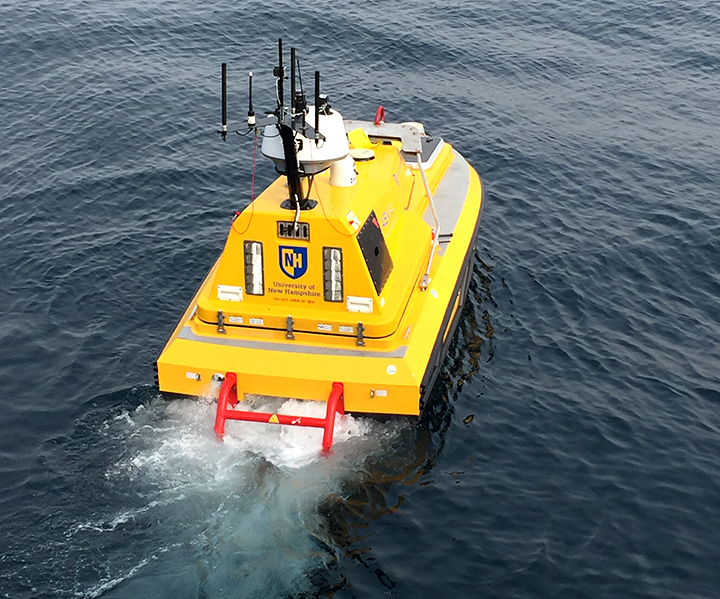 Courtesy Photo This autonomous surface vehicle, also known as BEN, which stands for Bathymetric Explorer and Navigator, will begin mapping the bottom of Lake Huron off the shores of Presque Isle County on Monday. The research project is a collaboration between the Thunder Bay National Marine Sanctuary, The Ocean Exploration Trust, and the University of New Hampshire’s Center for Coastal and Ocean Mapping.

ALPENA – Researchers with the National Oceanic and Atmospheric Administration will map the unexplored bottom of Lake Huron as part of a number of research projects planned for this year.

The research is a collaboration between NOAA, The Ocean Exploration Trust, and the University of New Hampshire’s Center for Coastal and Ocean Mapping, whose scientists will be deploying the unmanned vehicle and operating it from a mobile laboratory on shore.

The mission will focus on mapping unexplored areas of the expanded Thunder Bay National Marine Sanctuary, with the goal of discovering new shipwrecks and identifying shipwreck locations to support ongoing exploration and management, according to a news release from NOAA.

Three areas of Lake Huron off the coast of Presque Isle County will be targeted for the survey, including a lighthouse on a treacherous reef, dangerous, near-shore shallow waters, and the deep, mid-lake waters of busy shipping lanes known as “Shipwreck Alley.” The data could also help identify fish habitats and update navigational charts, NOAA said.

The Research Vessel Storm will dock at the Rogers City Marina and will also use multi-beam sonar to map the lake bottom in the sanctuary’s expanded waters. The marine sanctuary’s boundaries expanded in 2014 from 448 square miles off the Alpena County coastline to 4,300 square miles to include waters off of Alcona and Presque Isle counties.

“First, we are excited to have this opportunity to look for shipwrecks, but it also will produce data products that will be of interest to other Great Lakes researchers, such as biologists and geologists,” Stephanie Gandulla, acting research coordinator for the sanctuary, said. “It’s going to show us what the bottom of the lake looks like.”

Gandulla said only 20% of the lake bottom within the sanctuary has been surveyed.

Researchers will wrap up their mission on May 17, Gandulla said.

Researchers with the marine sanctuary will also map another area of lake bottom in July in partnership with NOAA’s National Center for Coastal Ocean Science.

Gandulla said the mission in July will also entail mapping and surveying the lake bottom, but the exact location of that mission has yet to be determined. Gandulla said marine sanctuary staff are currently working with their partners to narrow down the survey area, although it’s “very likely” the mission will be off the shores of Alpena, just outside of Thunder Bay.

“If you think about it, there are maps of the terrestrial planet,” she said. “Very little of the ocean and the Great Lakes have been mapped, so it’s ripe for exploration.”

Researchers will return in September for ground truth imaging, which Gandulla says creates an even more detailed image of the lake bottom.

Charles Menza, with NOAA’s Center for Coastal and Ocean Science, said he and his team are excited to begin mapping in Lake Huron.

“It’s a pleasure to work with partners who are so passionate about protecting the lake and learning of its natural and cultural resources,” he said in a statement. “We are particularly looking forward to exploring the lakebed with our partners this summer and adding to the body of ecological knowledge in the sanctuary with new maps of underwater species and habitats made from soundwaves.”

In addition to mapping the bottom of Lake Huron, the sanctuary staff will support two research projects involving the Middle Island Sinkhole, an underwater sinkhole which is teeming with microorganisms.

Those microorganisms date back to a time when life on earth was comprised entirely of microorganisms and there was no oxygen available, according to Nature.com.

Gandulla said two groups of researchers — one from Grand Valley State University and another from the University of Michigan — will travel to Alpena to conduct their research in June and July, respectively.

The researchers will spend one to two weeks addressing several remaining questions about how submerged sinkhole ecosystems of Lake Huron are structured and how they function. They seek to answer basic questions, such as which microorganisms are present, and what they’re doing.

Gandulla said the sinkhole has an ecosystem that’s “nearly unique” — one that has fascinated biologists from all over the world. She said it contains a microbial mat, which is a multi-layered sheet of microorganisms.

“What we are able to do at the sanctuary is support this research by providing vessel time and also scientific diving and sampling, so we’ll go down and collect that mat,” she said.

A long-term goal of the project is to figure out how photosynthetic microbial mat communities, such as the ones now inhabiting Middle Island Sinkhole, may have oxygenated Earth up to 3.5 billion years ago.

Gandulla said installing and maintaining the buoys over the course of spring and into summer is an important part of the sanctuary’s mission to not only protect the historical resources but to also encourage sustainable and responsible access to the shipwrecks.

∫ WHAT: A chance to see the autonomous surface vehicle in action in the Thunder Bay River

∫ COST: Free and open to the public

∫ INFO: More information on the marine sanctuary can be found online at thunderbay.noaa.gov or by calling 989-884-6200.