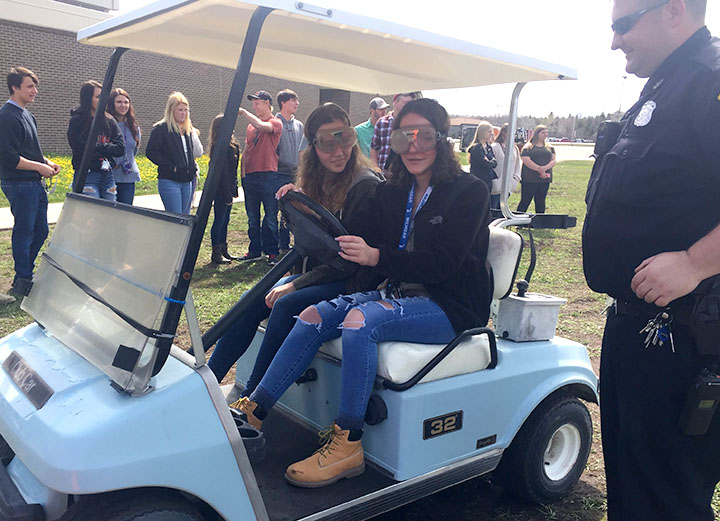 ROGERS CITY — The crowd of high school seniors oohed and groaned as another cone went down. They watched as their classmates, two by two, took golf carts through a course of orange cones on a grassy field outside Rogers City High School Monday morning, ski-style goggles perched over their eyes.

The orange cones took a beating, sometimes getting stuck under the golf carts as the students experienced what it feels like to drive drunk.

For the past 16 springs, high school seniors in Rogers City, Onaway, and Posen have safely experienced the distorted vision and impaired balance that diminish the abilities of a driver under the influence of alcohol. The program, the brainchild of a local officer concerned about teen safety, utilizes “drunk goggles” in an effort to encourage youth to make potentially life-saving decisions when it comes to alcohol and driving.

Moved by a local after-prom car crash involving teenagers driving under the influence of alcohol, Presque Isle County Sheriff Joe Brewbaker, then a Drug Abuse Resistence Education officer, developed a program encouraging young people, especially as they enter the graduation season, to think before they drink and drive.

As part of his DARE classroom curriculum for fifth-graders, Brewbaker was using special goggles designed by a retired sheriff in Colorado. The goggles, mimicking a range of blood alcohol contents, simulate the effect of alcohol on a person’s ability to do tasks as simple as picking up a pencil or walking a taped line on the classroom floor.

With the after-prom crash in mind, Brewbaker developed a program for high school seniors, giving them a glimpse of the dangers to which they could be exposed by sliding behind the wheel of a vehicle with even a small amount of alcohol in their systems.

“One drink or two, you don’t realize how impaired you are,” Brewbaker said.

He wanted students to see how the influence of a mind-altering substance like alcohol can affect a driver’s ability to be safe on the road. The Presque Isle program also uses goggles that simulate the effects of marijuana on the body’s reflexes.

In the program’s early days, seniors pedaled around the gym on tricycles while wearing the impairment goggles. An avid golfer, Brewbaker realized that golf carts would make a better stand-in for vehicles. Two carts, loaned by Stoney Links Golf Course in Onaway, are used to navigate between and around cones, including pulling into and backing out of a cone “garage.”

Now conducted by school resource officers in Rogers City, Hillman, and Onaway, the program is fun for students and officers alike, but at the same time offers a serious glimpse into a serious issue.

“I’m so scared,” said senior Cassie Lehman as her goggled driving partner tried to coordinate his actions enough to put the key into the golf cart’s ignition at the simulation Monday. The disoriented drivers drove shakily between the cones, giving school resource officers slightly off-target high fives and trying to figure out why their legs didn’t seem to be where they were supposed to be.

Several other counties in northern Michigan have started similar programs for their high school students in recent years.

“But, not to ring our own bell — but I will — we started it,” said Brewbaker.

The goggles gave a new and not entirely pleasant perspective to seniors Abbey Mulka and Maddy Hincka, both 17.

“Everything just shifted,” said Hincka. “It wasn’t fun. It made me motion sick.”

Navigating the course with the goggles helps the young drivers to know how difficult drunk driving actually is, Mulka said, and will help discourage her classmates from getting behind the wheel under the influence.

“It’s not safe at all. I thought I was doing good, but apparently I hit five cones,” Mulka said. “I don’t want to know what it would be like if I was actually driving on the road, thinking I’m doing good.”

The Michigan Associated Press contest winners were announced today and the entire editorial staff of The Alpena ...

ALPENA — All K-12 school buildings will be closed for the remainder of the school year, Gov. Gretchen Whitmer ... 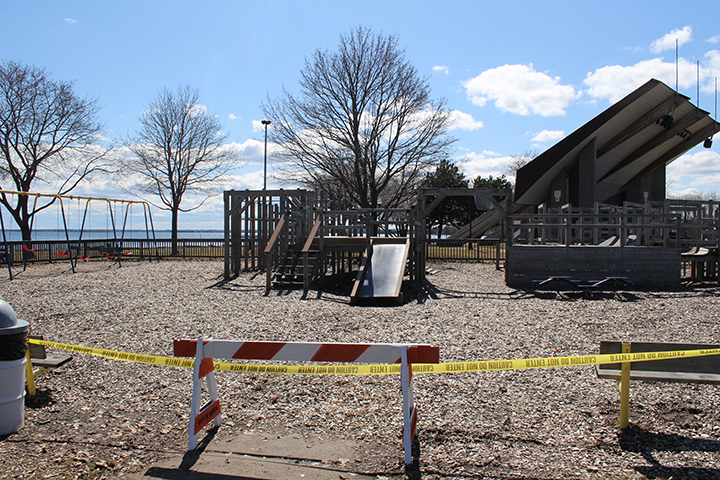 Gilchrist: Rural areas won’t be spared, but there is help 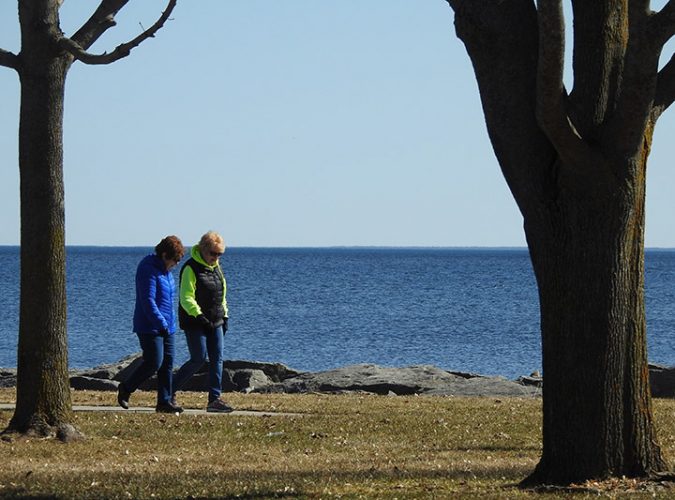 March was warmer, wetter than usual

An Alpena garage was burgled recently, the Alpena Police Department said, the thief making off with two Yamaha dirt ... 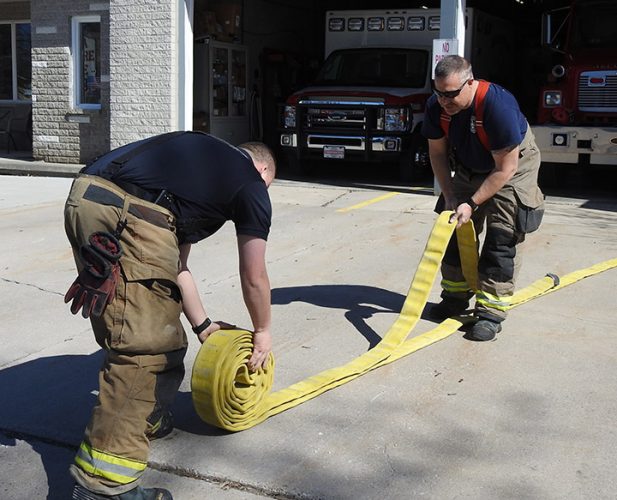 Newberry: Say no to bizarre ideas to get sports going again

Simone Biles on 2021 Olympics: ‘Nothing is set in stone’

Virus data: What we know and do not know about China’s virus numbers