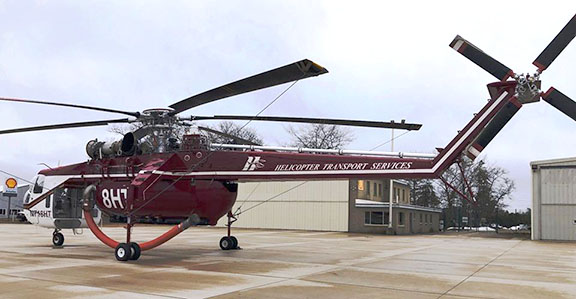 Courtesy Photo This U.S. Forest Service aircraft is one of a pair of helicopters that has been deployed to Alpena to monitor the area for forest fires for the next few months. The Skycrane in the picture is capable of moving large heavy objects and loading its water tanks with a apparatus that pumps water from lakes and rivers.

ALPENA — A U.S. Forest Service firefighting brigade is beginning to set up shop at the Alpena County Regional Airport and several of the aircraft have already arrived.

While in Alpena for the next 90 days, the helicopters’ crews will monitor local forests for fires and help extinguish them, if need be.

Airport Manager Steve Smigelski said that, right now, a pair of choppers are at the airport. One is a modified Skycrane that has the ability to haul heavy equipment and also has an apparatus that can pump water from a lake or river into tanks in the aircraft’s belly.

Smigelski said that, if there is a fire, they can more accurately disburse water than planes, which drop water out over a large area of ground.

“They can fly it out to where the fire is, hover over hotspots, and be more accurate on the spot-dropping. These guys can get right in there and put a house fire out, if they needed to,” Smigelski said.

The second helicopter is a Bell Jet Ranger that is used to patrol wooded areas from the air and respond to any reports of possible field, grass or forest fires.

“He’s the scout,” Smigelski said. “He takes off on a daily basis, flies around the area and observes. He looks for smoke from fires and, if he sees one, he radios it back to the base and then Skycrane will take off and start dumping water before it gets out of control.”

Smigelski said that, last year, there were more aircraft staged in Alpena. He said he wouldn’t be shocked if the U.S. Forest Service sent more resources in the coming weeks.

Last year, they had three twin-engine firebombers, a fixed-wing spotter plane, and a twin rotor helicopter, he said.

“So I would not be surprised at all if more units arrive,” he said.

The crews who operate the aircraft are staying at local hotels and eating at local restaurants, which Smigelski said adds a boost to the local economy, and there is also potential to sell fuel for the helicopters.

“Right now, they have their own tanker brought with them that they are using to fill up,” Smigelski said. “We aren’t sure what they will do when that runs dry. We do have the fuel farm here to provide fuel to them though.”