‘There needs to be trust’ 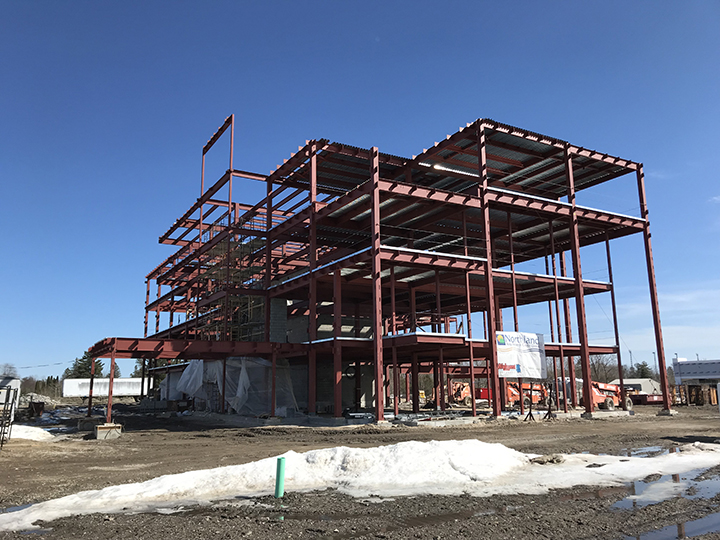 News Photo by Julie Goldberg The new headquarters for Northland Area Federal Credit Union is seen under construction on Bagley Street in Alpena recently. New construction has been on the rise throughout Alpena and the surrounding area since 2012, according to Jim Klarich, economic development director with the Alpena Area Chamber of Commerce. About $230 million will be invested from 2012 to the end of the 2020.

UPDATE: This story has been updated to reflect that the Alpena Convention and Visitors Bureau reached 35,655 people last year on its blog. Where that traffic went was unclear in an earlier version of this story.

ALPENA — Success and failure can be weighed in many ways, and data and hard numbers can show what a community’s greatest strengths and weaknesses are, guiding strategies to overcome deficiencies and amplify assets.

Sometimes, however, the key to overcoming challenges facing municipalities such as Alpena is being able to look beyond the numbers and focus on relationships and trust, said Dennis Schultz, a longtime Alpena business owner and former board president for Target Alpena, the economic development firm for Northeast Michigan.

“There needs to be trust, and I’m not seeing a lot of that, these days,” Schultz said, pointing, as an example, to the years-long fight over water and sewer rates between Alpena and Alpena Township, the two biggest communities in Northeast Michigan. “These people should be spending a lot more time in a room together, working together, getting to know each other better, and working toward a common goal. For as much as they depend on each other, I just can’t believe they aren’t talking every day about something.”

Alpena was badly battered by the Great Recession, losing residents and jobs by the hundreds. As it’s started to claw back, the region has slowly diversified its economy, relying less on manufacturing and more on arts, entertainment, hospitality and retail jobs related to tourism.

That shift has forced the area’s leaders to redirect their efforts to solicit the kinds of jobs, housing, and entertainment that can feed the new economy, while staying mindful to maintain the rustic charm Alpenans love about their hometown.

Alpena Area Chamber of Commerce President/CEO Jackie Krawczak said open lines of communication, honesty and respect is not only needed, but essential to ensure Alpena’s future is bright and strong.

“If we want to achieve the greatest good for the community, we must find ways to eliminate working in silos and find ways to work beyond territorial tendencies,” she said. “It doesn’t mean we can’t disagree, but we must push to have productive discussions in order to make decisions about what is best for the community and our growth and development. When we forget about the big picture, that we are all one community, and resort to protecting our perceived silos of power or push for narrow and shortsighted gains, we put our community as a whole at a major disadvantage.”

THE RIGHT KIND OF MONEY

Most often, Schultz said, the difference between a successful project and one that gets away is money. Business incentives and tax abatements are important tools, he said.

“You have to compete with others who offer them,” he said. “It is part of the business world we live in.”

Alpena has five abatements in place, and most have yielded the hoped-for results. In a report last month, city officials said those companies, Alro Steel, Dean Arbour Ford, Douville-Johnson, David Kneeshaw and Alpena Lodging, have generated a combined $12.6 million in real and personal property investment and about 90 new jobs.

City Planning and Development Director Adam Poll said being able to offer businesses temporary financial relief to make a project easier to get off the ground is almost a must when trying to attract developers.

“They let us compete with other cities and municipalities around the state,” Poll said. “They are using these tools and, without using them ourselves, we wouldn’t be able to keep up with some of the larger cities. We want to make sure we have every abatement tool we can so we make sure we don’t provide a disadvantage to any business that wants to locate in Alpena.”

Through its economic development firm, Target Alpena, the region also actively markets potential development sites to investors. Big projects in the queue now include the former Kmart property on U.S.-23 and the former Alpena Power Co. site on the Thunder Bay River. Though there is significant interest in those properties, no news is imminent, said Jim Klarich, executive director of Target Alpena.

Downtown, grants and other investments help beautify buildings and bring other amenities that might encourage more shoppers and, therefore, more businesses. Recent investments include an effort to bring more murals to the sides of downtown buildings and there are plans to install several bicycle racks downtown this summer. The Alpena Downtown Development Authority also hopes to open a business incubator, which would help launch new businesses under one shared roof.

Meanwhile, tourism has become one of the biggest economic drivers in the Alpena. The Michigan Economic Development Corp. says visitors spent a total of $172 million in Alpena, Montmorency, Alcona and Presque Isle counties last year.

However, the bulk of that activity takes place from Memorial Day through Labor Day, and officials are hoping to grow business in the offseason months.

“We are shifting some of our marketing to fall and winter,” said Mary Beth Stutzman, president and CEO of the Alpena Area Convention and Visitors Bureau. “I think people tend to look at Alpena as a summertime place to visit, but we really have a lot of things going for us outside of that,” including beautiful fall colors, ice fishing, cross-country skiing, and snowmobiling.

“We just need to continue to get the word out about these things,” she said.

The Convention and Visitors Bureau also is expanding online, reaching 35,655 people last year on its blog and growing its social media followers by 34 percent, according to the MEDC data.

Tourism and community development enjoy a symbiotic relationship, Stutzman said, with money and energy from tourism feeding other improvements for residents.

“Any time we make a community better for visitors, we’re automatically making it better for ourselves,” Stutzman said, “Because the things that visitors enjoy when they come here are the very same things that we like and why we’ve chosen to live here and remain in the community.”

Northeast Michigan schools, meanwhile, are working to train both young and older students for the kinds of jobs the area hopes to have in the future.

“It can prepare students for the workforce, if they choose to go straight into that,” Alpena Public Schools Superintendent John VanWagoner said. “It’s a great opportunity for students and it’s a great thing for them.”

In December, APS and four neighboring school districts were awarded a combined over $1.9 million from the state to expand curriculum, implement certification programs, and hire career navigators to help students explore their options after high school.

A big requirement of that grant was that the school districts work with local businesses, Alpena Community College, and the Alpena-Montmorency-Alcona Educational Service District, VanWagoner said.

“This forces us all to sit and look at what kind of jobs and internships are out there, what type of apprenticeship programs are we able to create and be able to start, what type of summer high school credit opportunities are there for kids to earn credits on job sites with a teacher meeting with the employer,” VanWagoner said. “That’s the real goal … is for all of us to make sure, for our community’s sake, for our economic vitality sake, that we have workers to be able to provide to our local businesses and companies and that our kids have an opportunity at a high-paying, high-skill position without having to leave Northeast Michigan.”

But it also could bring new headaches.

Downtown parking, for example, has been the subject of debate for years. Some think there are ample parking units, while downtown business owners want easier parking closer to their stores.

Some parking stalls have been added, but, “as we get more development, parking will continue to be an issue,” said Anne Gentry, executive director of the Alpena DDA. “Establishing a garage is a priority, because the best way to build is by going up. We are right on the threshold of needing that type of development.”

The best-case scenario would be for a developer to pay for a garage and parking meters, said Klarich, the Target Alpena executive director. But that could cause its own headaches, he said.

“Everyone would fight for the free parking and try to avoid the garage or meters,” he said. “You would have to have (paid parking) everywhere, because the owner (of a garage) would want to make their money back.”

Housing stock, especially rental housing often preferred by younger generations moving into the area, could be another headache, because the city doesn’t have enough of it.

There’s work underway on that front, too. Target Alpena officials envision a multi-story project at the former Alpena Power Co. site, featuring businesses on the ground floor and apartments and lofts up top.

In the face of such headaches, and not wanting to lose the small town surrounded by nature they love, some Alpenans would like to see its leaders put a lid on development, to set a goal for how much development is enough to pump money into the area without overdoing it.

Growth has to happen, he said, and making sure it happens smartly would reduce the strain on the area.

“I don’t think we have a particular goal and I’m not sure we should,” he said. “The simple fact is there are only two ways to go: up or down. You don’t stay the same.”

“This is Us” takes an in-depth look at the changing economy in Northeast Michigan and the efforts of Alpena leaders to preserve the city’s identity while managing its changing economy. Alpena News reporters spent weeks collecting data and conducting interviews for this series.

∫ Where we should go from here, The News’ editorial stance on the city’s future, 4A

∫ A look at how Alpena tries to build solid youth sports programs to attract and retain top talent, 1B

IN CASE YOU MISSED IT

∫ Saturday: Alpena’s leaders look to preserve the town’s identity as its economy shifts to one more heavily dependent on tourism, and a look at how the city’s lack of athletic training facilities hurts its efforts to build strong athletic programs.

∫ Monday: A look at how Alpena’s leaders are working to attract young people to invest in the city’s future.

∫ Tuesday: Why one man decided to leave Alpena, and why another came home

Past issues are available at The News, 130 Park Place, and to subscribers through the e-edition.