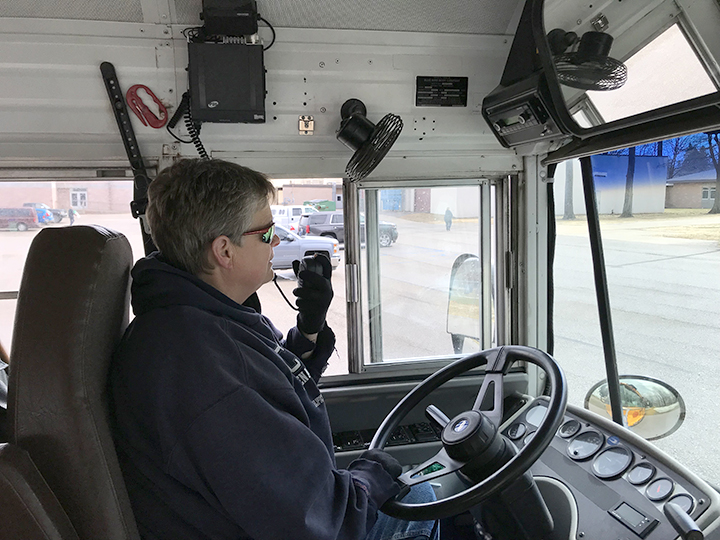 News Photo by Julie Goldberg Alcona Community Schools bus driver Debbie Kahila uses one of the new transportation radios the district was able to purchase because of a U.S. Department of Homeland Security grant.

LINCOLN — Alcona Community Schools recently received a grant through the U.S. Department of Homeland Security to purchase a new transportation radio system that has improved communication for bus drivers on their routes.

The new system was installed during spring break in March.

Superintendent Dan O’Connor said the new radio system improves communication between the buses and the district’s transportation office in Lincoln. Before this new system, the district had radios that weren’t reliable, and bus drivers would sometimes have to use their cell phones to communicate.

“The county had quite a few dead zones with a low-power bus radio, so, really, our only option was to upgrade to the 800 megahertz radio system,” O’Connor said.

The district covers mroe than 300 square miles, with some hilly terrain, O’Connor said. If buses would go by Lake Huron or into Harrisville, communication would become spotty with the old radios, so an upgrade was needed.

The new radio system can be used anywhere in the state, so when buses travel for athletic events or field trips, bus drivers can communicate with the district in Lincoln. One bus driver was able to recently communicate with Lincoln while in Detroit.

The radio system also has a second channel so bus drivers can connect to emergency services, if needed, which is a key component of the purchase, O’Connor said.

O’Connor said he and other district officials worry about student safety, but the new radio system eases some of that worry, now.

“A bus driver’s job is arguably one of the hardest jobs in the district, and they are on an island as they’re traveling through the county with themselves and our most precious cargo, the kids,” O’Connor said. “It’s a major upgrade for our safety, security, and communication.”

Bus driver Billy Cordes said the new radio system has made it easier for drivers to communicate when on routes.

“Having the 800 system is good, because the state maintains all the towers (and) they’re guaranteed to work,” Cordes said.

“We’re very grateful to be awarded the grant and it went a long way in being able to help us come up with a fix for all buses and offices in general,” O’Connor said. “It’s probably something people would take for granted, but it’s pretty awesome for our district to be able to upgrade that portion of technology.”