HHS works with area vets for greatest quality of life 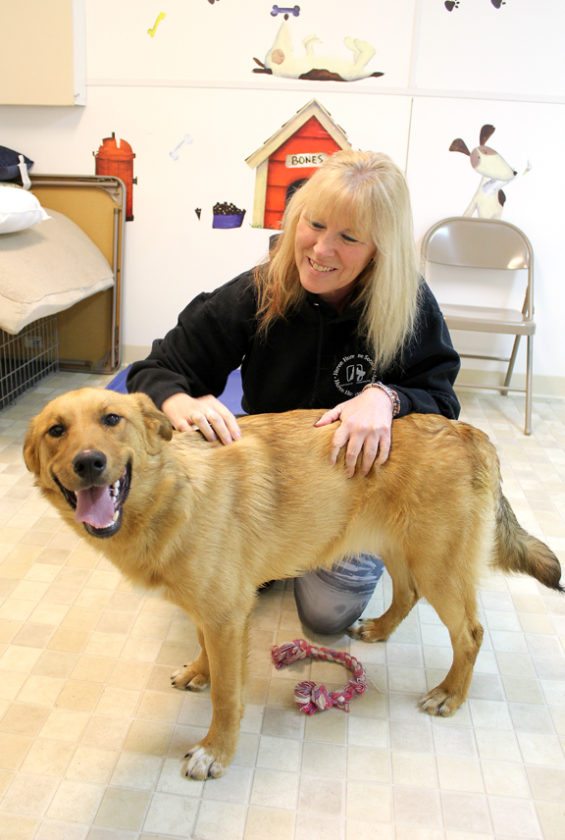 News Photo by Steve Schulwitz Huron Humane Society Manager Natalie Francis plays with Jeep while at work at the shelter Thursday. Francis said the adoption rate is up and occupancy rate down at the shelter and operations are going smoothly. Jeep is available for adoption and can be seen at the shelter.

ALPENA — Finding animals safe and loving homes isn’t the only goal of the Huron Humane Society. It also wants to make sure the animals are healthy, have as high of quality of life as possible while at the shelter and to help educate people who adopt animals on how best to care for and train them.

According to Shelter Manager Natalie Francis, these things are being accomplished, although much of it is done outside of the public’s view.

Francis said operations at the shelter are progressing smoothly and the care for the animals and facility are as strong as ever. She said animal occupancy rates have stabilized and adoption rates have been going up. Francis attributed the increase in animals finding homes is the investment being made into their health before being adopted.

“A great thing we are doing now is vet checks prior to adoption. We’re working with all of the local vets and all of the animals see them before going to new homes,” Francis said. “This helps to make sure they are healthy and ready to go when a family wants them.”

“We’re not vets, but we do everything we can here in order to help get and keep the animals healthy,” she said.

A good portion of the shelter’s funding is received from private donations and fundraising. Over the years HHS has received tremendous support from the Alpena community and beyond, she said. Francis said there was a decline in revenue last year, but the board and staff were able to continue to meet the needs of the animals. She said recent controversy has caused some donors to hold onto their money to see how the drama unfolds.

“We’re doing OK and our doors are still open,” Francis said. “Obviously with the recent controversies I believe some people are waiting to see what is happening. I don’t see it as a long-term thing. Overall, we have good relationships with our donors and if we continue to do what we’re doing and taking care of the animals they will continue to support us.”

Francis said she would like people who have doubt or questions about how the shelter is being run to stop in and see for themselves. She said she encourages anyone with concerns about operations or the care of the animals to tour the facility and mingle with the adoptable pets. If they do, she said she is confident HHS will regain the support of some who may have some doubt about the direction of the shelter.

“Come and see that the animals are healthy and that we have a positive staff who truly cares for the animals and love them,” Francis said. “There are a lot of positive things that are going on and I think if the public sees that it will regain its confidence in us.”

The HHS is getting ready for its annual gala, which is the biggest fundraiser of the year, on March 10. For ticket information on the gala, call the shelter at 356-4794.