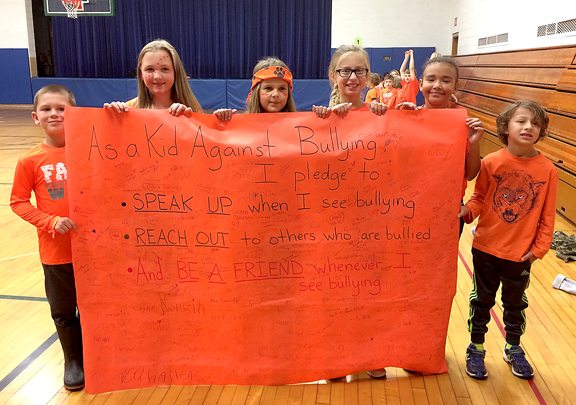 ALPENA — Ella White Elementary students participated in different activities during the school day on Wednesday to show that they stand up against bullying during Unity Day.

Fifth-grader Isabelle Kocan said the school met at the beginning of the day and her class read a book about bullying. She said everyone signed a poster saying they will pledge to speak up about bullying and reach out to those who are bullied.

LaCombe said the PTA sponsored the different events that happened throughout the day, including the poster that all the students signed.

“We learned that we should be nice to others,” first-grader Mason Mills said. “We also learned that you shouldn’t be rude to other people and that if you are being bullied, you should tell someone.”

Mills said he learned a lot about bullying and how to stand up if it happens.

All the students received an orange bracelet to show their support for those who are bullied.

“Unity Day is about being nice to others and being helpful to others,” first-grader Greyson Christensen-Cooper said.

Students all around Alpena wore orange during Unity Day. Wearing orange is a vibrant color and is a powerful, visually compelling expression of solidarity, according to the National Bullying Prevention Center. The vibrant statement of wearing orange becomes a conversation starter and sends the unified message to kids to know that they are not alone.

Julie Goldberg can be reached via email at jgoldberg@thealpenanews.com or by phone at 358-5688.