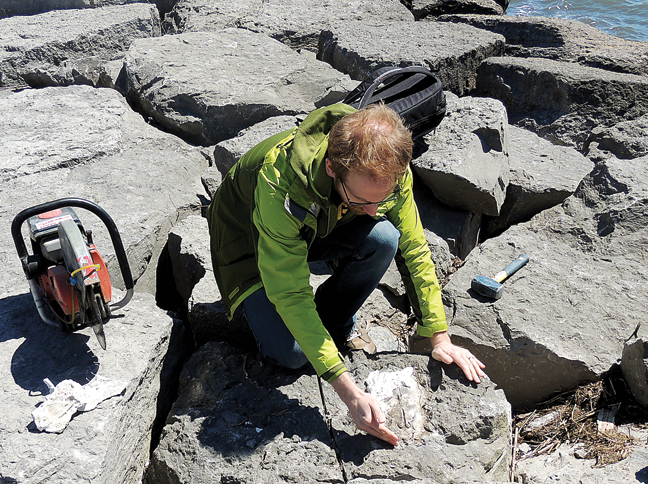 News Photos by Diane Speer Matt Friedman of the University of Michigan’s Museum of Paleontology checks out the fossilized remains of an anicent fish embedded in a large rock found at the breakwall near the basketball and tennis courts.

He’d long heard rumors of rare remains of an entire fossilized fish embedded in the large rocks making up the limestone breakwall on Thunder Bay, near Alpena’s basketball and tennis courts.

“It’s been an urban myth,” said Kchodl, who first checked it out last year and after being duly impressed, contacted another expert in the field, Matt Friedman of the University of Michigan’s Museum of Paleontology.

With permission from city officials, Kchodl and Friedman traveled north to Alpena Friday to extract the ancient fossil material and cart it back to the U of M lab for further study.

As it turns out, the remains aren’t of an entire fish but only a large piece of a fish skull. Even so, Friedman said the significant specimen was old — a whopping 380 million years old since it existed during what is known as the Devonian period.

By way of an explanation, Kchodl said Michigan was covered by a warm shallow tropical sea over 350 million years ago, and that the sea was teaming with life and fish — so much so that it was named the Devonian period, which stands for Age of Fish.

By looking at the fossilized remains, Friedman was able to determine the species of armor-plated fish and that when alive, he said it would have been an estimated six to nine feet in length. He brought several lab assistants to Alpena with him, and together they stabilized the fossil with an acetone spray and plastic glue before removing it from the rock with a saw.

“The acetone spray dissolves and the plastic glue is easily removed. It won’t damage the fossil but will hold it together,” Friedman said, adding that finding one of its size is considered somewhat of a rarity for northern Michigan.

It wasn’t the only fossil the group planned to remove while in Alpena. They also concentrated on a second large fossil of a different, but equally large species of fish, discovered by Kchodl in the same vicinity. The large stones that make up the breakwall originated in the Lafarge quarry and because they are limestone, contain many smaller remains of ancient sea life.

Once at U of M, the fossils will be studied and preserved. A cast of them, plus any research conducted on them, eventually will be presented to the Besser Museum for Northeast Michigan for its collections. Director Christine Witulski was on hand Friday for part of the excavation process.

Diane Speer can be reached via email at dspeer@thealpenanews.com or by phone at 358-5691. Follow Diane on Twitter ds_alpenanews.